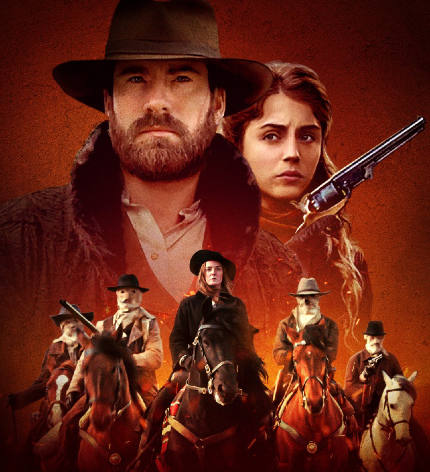 A French family embarks on a dangerous journey across a strangely empty United States during the Civil War.

Well, it sounded like a good idea. Personally, I can't ever remember a film that focused on French people living in the United States during the Civil War, which is what originally piqued my interest in the sophomore feature by writer/director David Perrault (Our Heroes Died Tonight).

Savage State follows a wealthy French family that is well-established in Saint Charles, Missouri (located near St. Louis). After the American Civil War breaks out and the city of New Orleans is captured by the North (i.e., Yankees), family head Edmond (Bruno Todeschini) can read the writing on the wall and hires French-speaking mercenary Victor (Kevin Janssens) to escort his family through perilous territory so they can catch a boat back to France. Along the way, individual family members are given reason and opportunity to reflect on their past and contemplate the future.

The film is elegantly shot, carefully composed, and richly detailed. Sadly, the possibility of a fresh perspective on issues that have long troubled the US are frittered away in favor of stale character drama and a slack pace. It often feels like the entire film has been coated in molasses and congealed into a stubbornly obvious narrative. A few surprises are unveiled, though the absence of emotional ballast means that the impact is lost amidst the lovely scenery (shot mostly in Canada, I believe).

It doesn't help that writer/director Perrault chooses to spend an extended period of time setting up the eventual journey without much of a pay-off as far as the characters are concerned. As noted, the sequences set in Saint Charles, Missouri, are lovely to behold, but little insight into what drives the family is provided. We see that family patriarch Edmond is unhappily married to severely grumpy Madeleine (Constance Dolle), who is terribly unhappy that her husband is carrying on a love affair with their maid Layla (Armelle Abibou), an emancipated slave.

We also see the family's three daughters milling around the family mansion, generally unhappy and dispassionate about life, though the youngest girl Esther (Alice Isaaz) is attracted to Victor and sparks to the possibility of romance. Victor, naturally, has a past that will come back to bite him and prove to be dangerous for the family.

Once on the road, the changing scenery provides pleasant diversion, though the landscape is strangely empty of inhabitants, which is puzzling -- did Victor and his fellow guides find the only path in American that was empty of any, you know, battling, divided Americans? And for a film set specially during the American Civil War, it is peculiar that is steers away almost entirely from any discussion of the slavery, save for matriarch Madeleine treating Layla as a slave, though she has been emancipated.

More puzzling decisions lay ahead for the family and their companions, including the decision to strip the eventual antagonists of any convincing motivation for their actions. Savage State features individual scenes that are gorgeous and intriguing, but it doesn't add up to more than its surface attractions.

Do you feel this content is inappropriate or infringes upon your rights? Click here to report it, or see our DMCA policy.
Alice IsaazBelgiumCanadaDavid PerraultDéborah FrançoisFranceKevin Janssens