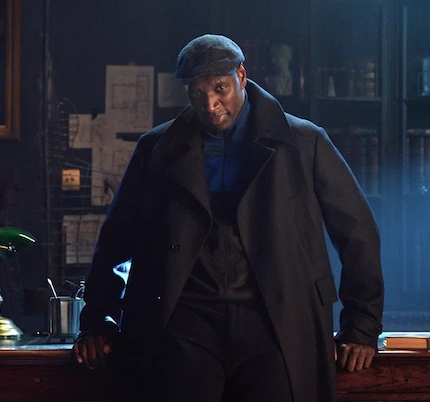 Imagine taking inspiration from a novel!

Created more than 100 years ago in the mind of writer Maurice Leblanc, Arsene Lupin has become a venerable character in French media, appearing in a series of novels, short stories, plays, films, and television shows over the past century. He crossed over to Hollywood in the 1930s for a couple of films, and then to Japan in the 1950s and elsewhere.

In Japan, his fictional grandson became the star of a manga series, adapted as an anime series, and then established in Miyazaki Hayao's 1979 feature film adaptation Lupin the Third as a rollicking, action-comedy lead. This adaptation was foremost in my mind when I started watching a new series created by George Kay and Francois Uzan, which meant I was unprepared for the straight crime-drama that slowly unfolds.

Omar Sy stars as Assane Diop, the son of an immigrant from Senegal who found work as a butler at a fabulous estate owned by evil industrialist Pellegrini (Herve Pierre). When a valuable necklace goes missing, Pellegrini frames the butler, who ends up committing suicide in prison and leaving his son an orphan at age 14.

Assane desperately wants to clear his father's name, yet is drawn to a criminal lifestyle until his longtime lifepartner Claire (Ludivine Sagner) becomes pregnant. When Assane is introduced, though, the relationship has finally floundered, with their son approaching his 14th birthday. Meanwhile, Assane hatches a series of elaborate plots to exact revenge upon the older, still corrupt Pellegini, taking inspiration from Arsene Lupin, a book given to him by his father.

Once I realized that this Lupin was meant to be viewed as a serious take, I settled in and enjoyed Omar Sy's relentless charm and art of persuasion. Over the course of five, hour-long episodes, the question of 'how can he afford this?' constantly kept coming up, however, even though I could not help but admire the ingenuity of some of the plot mechanics.

Still, the series feels like a good investment. The action is not pushed very hard, despite the presence of veteran action director Louis Letterier at the helm of the first and third episodes. Instead, it's more about a man who wants to be a good father and a good husband, but is consumed by a thirst for family justice.

The second part of the series - evidently five more episodes of similar length - has been announced and will also be streaming on Netflix at some point in the near future.

More about Lupin III: The First