Andrew Mack
Editor, News; Toronto, Canada (@Mack_SAnarchy)
Tweet Post Submit
The end is nucking figh. The light is at the end of the tunnel. This is not the beginning or the end, but the beginning of the end. Maybe not any time soon but perhaps some time this year we will be able to gather en masse and in house and go back to the traditional film festival formats. For the moment though we will have to be patient as knock this pandemic crap down a few notches to ensure that we can do so safely.
In light of the current situation the Final Girls Berlin Film Festival has chosen to go virtual next month. The four day event will include screenings of Time of Moulting, The Returned, Darkness, The Stylist and 12 Hour Shift. There are also five blocks of shorts films and many talks and panels.
You will find all that you need to know about the program in the gallery below.

The Final Girls Berlin Film Festival, Berlin’s premier showcase of horror films directed and produced by women and non-binary filmmakers, will return in the new year for the 6th time and first virtual edition. The fest will run from February 4 - 7, 2021, and include features, short blocks, and an impressive slate of talks and special offerings. Feature films will be geo-locked to Germany while several short blocks and all non-film programming will be viewable worldwide. This will be followed by a planned second in-person event to take place over Halloween weekend, October 29-31, at City Kino Wedding in Berlin.
"Like many festivals confronting COVID-19, we thought long and hard about how to make our festival as safe and enjoyable as possible and decided to split our 6th edition,“ explains festival co-director Eli Lewy. “The February program includes a number of films about loneliness, technological reliance, and confinement that reflect our present-day reality in chilling ways.“
Co-director Sara Neidorf sees the current pandemic as a chance to connect across geographical distance and goes on to say “we’ve got a thrilling side program with workshops and talks from horror scholars that we’re extremely honored to have with us. These times are grim, but they bring an opportunity to virtually connect with an international feminist horror community that otherwise couldn’t normally make it to Berlin, so we hope more and more folks will emerge from the woodwork and come join us!“
Listed as one of MovieMaker Magazine’s Top 50 Genre Festivals in the World and named among Dread Central's The Best Horror Festivals in the World, Final Girls Berlin has quickly announced itself as a leading international destination for genre fans and filmmakers alike, and is thrilled to present a dynamic digital line-up consisting of five features, five short blocks, and non-film events that include talks, a screenwriting workshop, special podcast episode, and more. 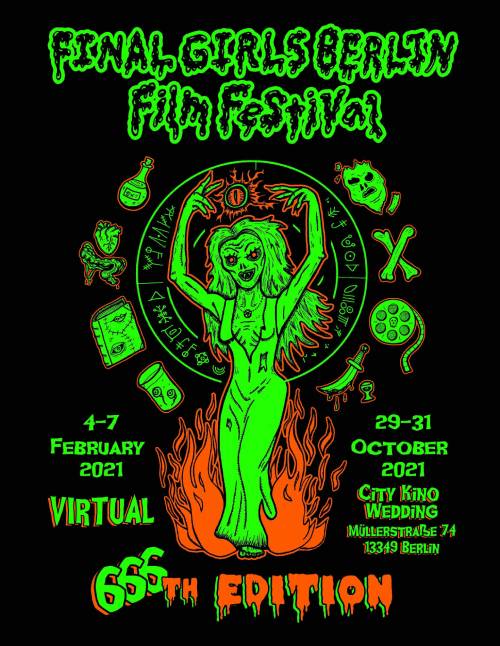 Have you always had a secret desire to write your own short film - but don't know where to start? In this interactive and supportive workshop, we will focus on creating horror films led by women and nonbinary characters. You will learn how to create stories, imagine new characters, and how to plot and structure your ideas. By the end of the workshop, you will have the beginning of your screenplay, and a plan for how to finish it.

While researching and writing her book 1000 Women in Horror, 1895-2018, Australian film critic and author Alexandra Heller-Nicholas was struck by the scope of women’s horror filmmaking. That scope leads to some important – and sometimes difficult – questions: are horror films made by women necessarily ‘feminist’? What do we mean when we talk about ‘feminism’ anyway? Do women make necessarily different kinds of horror films to men and represent violence in different ways? And who has told us which women horror filmmakers’ matter – and, through their omission from popular memory, which ones don’t?

Rather than presenting a singular alternate history of women’s horror filmmaking, Heller-Nicholas seeks to blow open the way we think about this subject more broadly, looking at a range of examples from around the world in order to think through ways we can collectively rethink the history of horror more broadly to be more inclusive, more representative, and more fun.

IF ROSEMARY COULD RUN: WOULD YOU KNOW IF YOU WERE IN A CULT?

An exploration of cults in horror and cults in real life, how they actually work, and how to know if you're in one (and what to do about it). Discussion and Q&A led by Pretty Deadly Self Defense founder Susie Kahlich and religious and cult studies expert, and Pretty Deadly Coach, Seriina Covarrubias.

“Girls Gone Wild” explores women-led horror films featuring young women who take active roles in their stories, maintaining control of their bodies, choices, and lives. These characters subvert expectations of women on screen – especially in genre cinema, where they are so often limited to the helpless, flailing victim or rise-to-the-occasion Final Girl. On the surface, they frequently reflect enduring stereotypes, envisioned variously as beautiful, deceptive, unruly, hysterical, immature, manipulative, overly-sexual, or reckless. But they also challenge these traits, negotiating expectations of how women should look and behave, how they move through and interact with the world, and what happens when they don’t conform.

The Gaylords of Darkness podcast present: THE NECRONOMOLOGUE

Get a glimpse inside stately Gaylords Manor as the Gaylords of Darkness podcast hosts, Stacie Ponder and Anthony Hudson, name their top ten Final Girls in this first-ever animated countdown video from your favorite queer feminist horror podcast.

I Spit on Your Podcast present: SATANIC FEMINISM: EMBRACING THE DARKNESS

Through the films Don't Deliver Us From Evil (1971), Alucarda (1977), Jennifer’s Body (2009), and The Witch (2016), the Spinsters of Horror will explore the representation and importance of Satan as the image of an anti-patriarchal idol and source of empowerment for women. Through witchcraft, possession, and pure free will, elements often referred to in connection with Satanic worship, the women of these stories explore their deepest darkest desires while breaking the bondage of conformity and oppression to become liberated spirits of wild feminine abandon. They achieve this when up against religious repression and temporal exploitation that surrounds their burgeoning sexuality and independence. By highlighting the three main Satanic opponents of the patriarchy -- Eve, the witch, and the succubus -- they will show that there is strength in darkness and power within embracing the ideology of Satanism.

HER HUNGER: THE LESBIAN VAMPIRE AND QUEER IMMORTALITY, SUICIDALITY, AND CODEPENDENCY

In this lecture Annie Rose Malamet traces the history of the lesbian vampire in film. Starting with a summary of Sheridan Le Fanu’s novella Carmilla as the origin of the lesbian vampire mythos, we will trace her path in film from 1932 to the present day. Contained in this history is the way that queer women have reclaimed and clung to the figure of the lesbian vampire as a symbol of dark eroticism and the less savory aspects of queer life, those of which have not been abated by assimilationism and neo-queer pride. 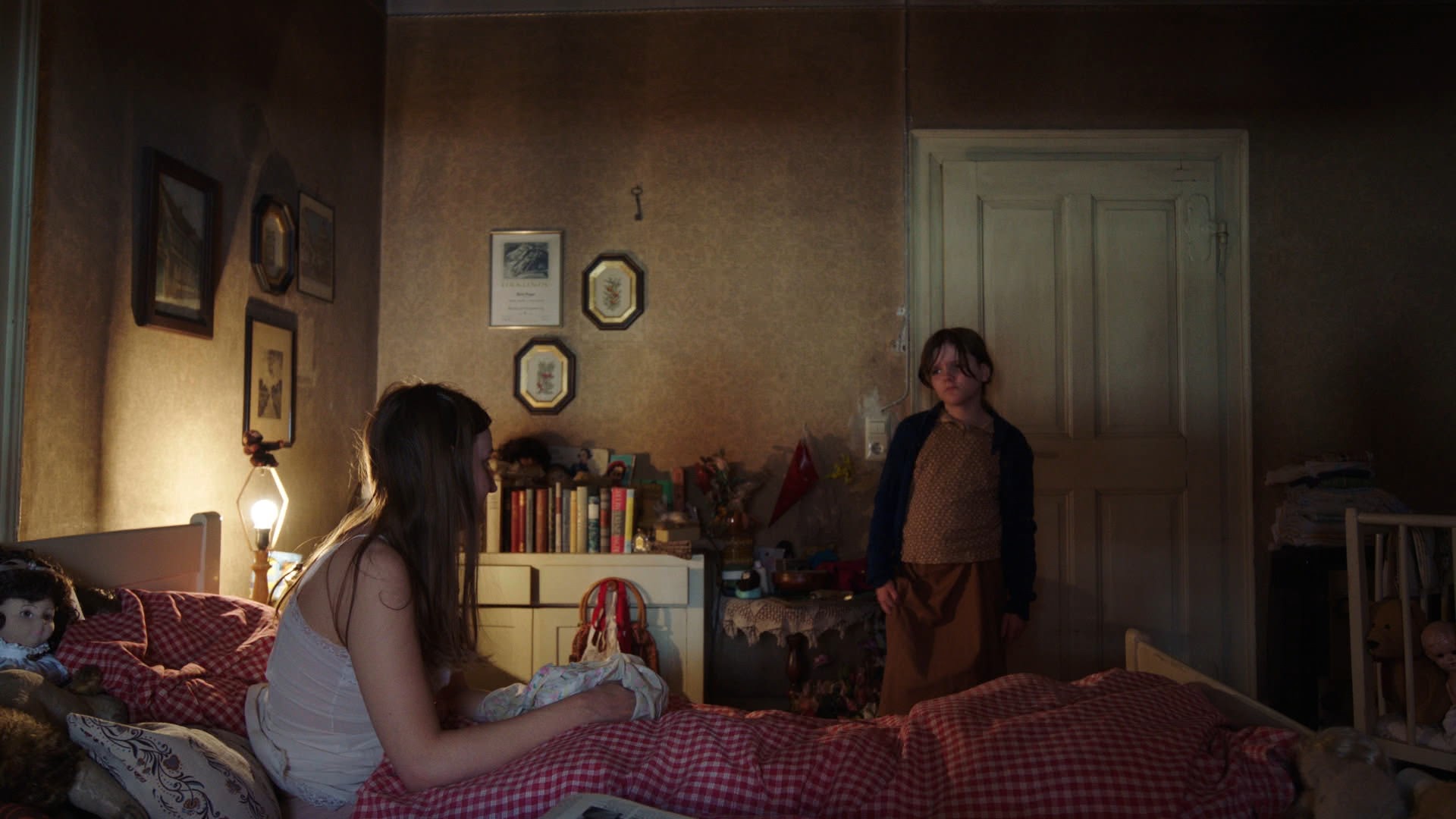 In a small town in 1970s West Germany, Stephanie is an intelligent and lively child living an insular life with her parents. She senses that something is wrong in her family, something that cannot be put into words, and she pushes against it where she can. FELLWECHSELZEIT is a heavily atmospheric and harrowing portrait of the ways in which oppressive and repressed family dynamics can influence and infect the lives of younger generations-- not tangible, not namable, but inexorable. 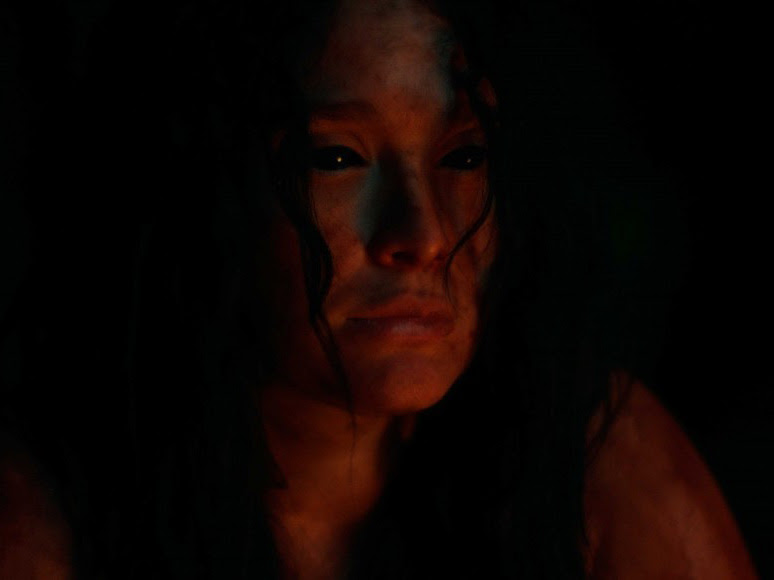 South America, 1919. The indigenous peoples of the Guarani tribe have either fled, been exterminated, or reduced to servitude. Julia, the wife of a landowner, gives birth to her third dead child. Desperate, she begs Kerana, her Indigenous maid, to bring him back to life. The creature returns, but not alone. 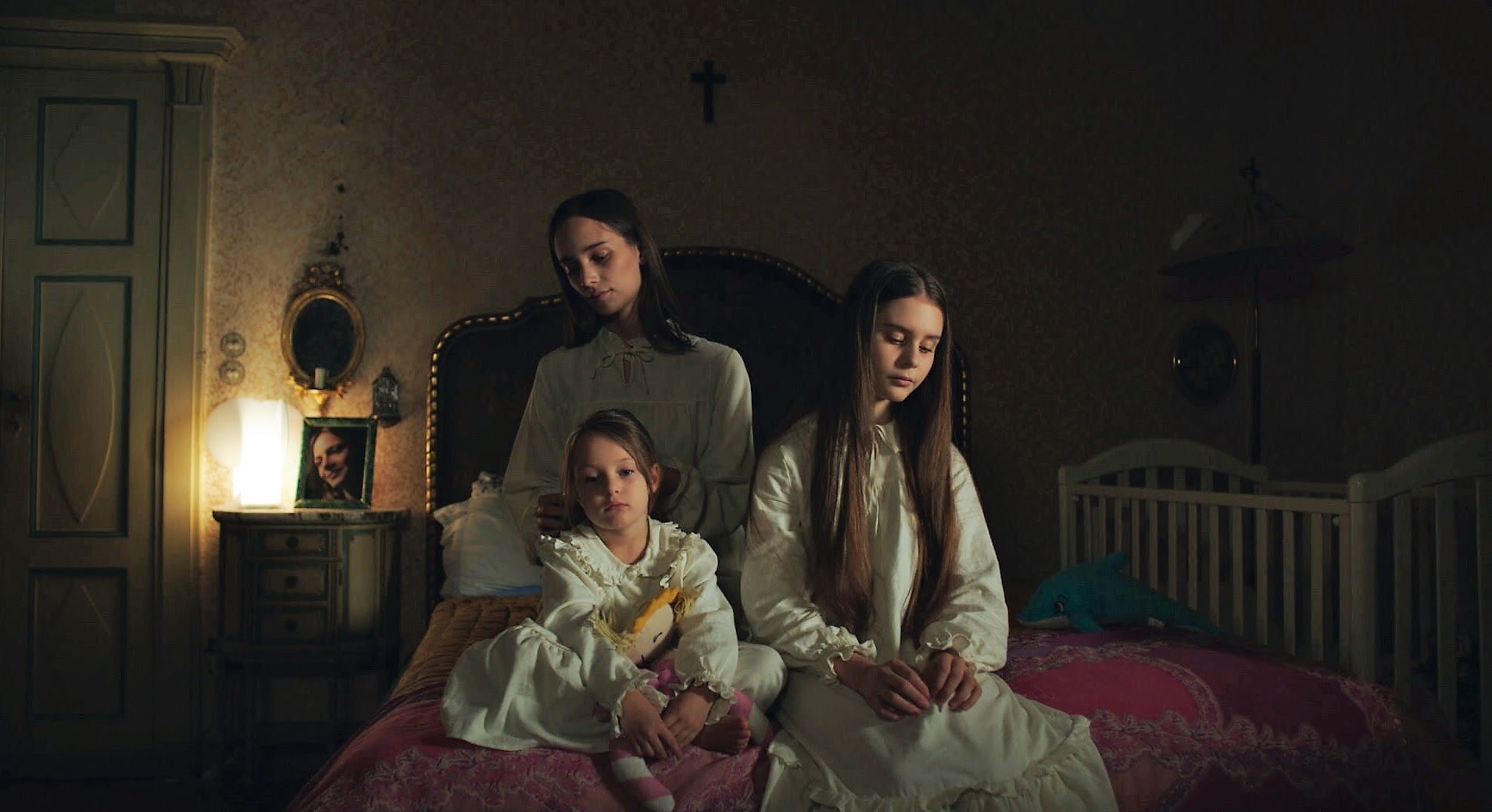 17-year-old Stella and her younger sisters, Luce and Aria, are locked inside their house with bars on the windows. Outside is the Apocalypse: two-thirds of humanity is dead since sunlight has become too strong and only men can venture outside. The girls stay locked in their house, alone, with no food until things begin to break down and puncture the delicate shell of their cloistered existence.

Everyone dreams of being someone else, but for Claire, that dream goes from an obsession to a living nightmare. Working as a hairstylist, Claire easily moves in and out of other people’s worlds and is able to seamlessly pursue her disturbing predilection. Her lonely life, gruesome hobby, and shocking secrets are thrown into turmoil when Olivia, her regular client, begs her to do her wedding hair. Could she have finally made a true friend, or is Olivia just like the rest?

Nurse Mandy is desperate to make it through her double shift without incident. This proves to be particularly hard when you’re an addict and involved in black market organ-trading at the hospital. When her hapless cousin Regina messes up a kidney delivery, chaos descends on the Arkansas hospital as the two women frantically try to find a replacement through any means necessary. It doesn’t take long for things to spiral even further out of control when you throw in a dangerous convict, nagging patients, a well-meaning cop, and a whole lot of blood. 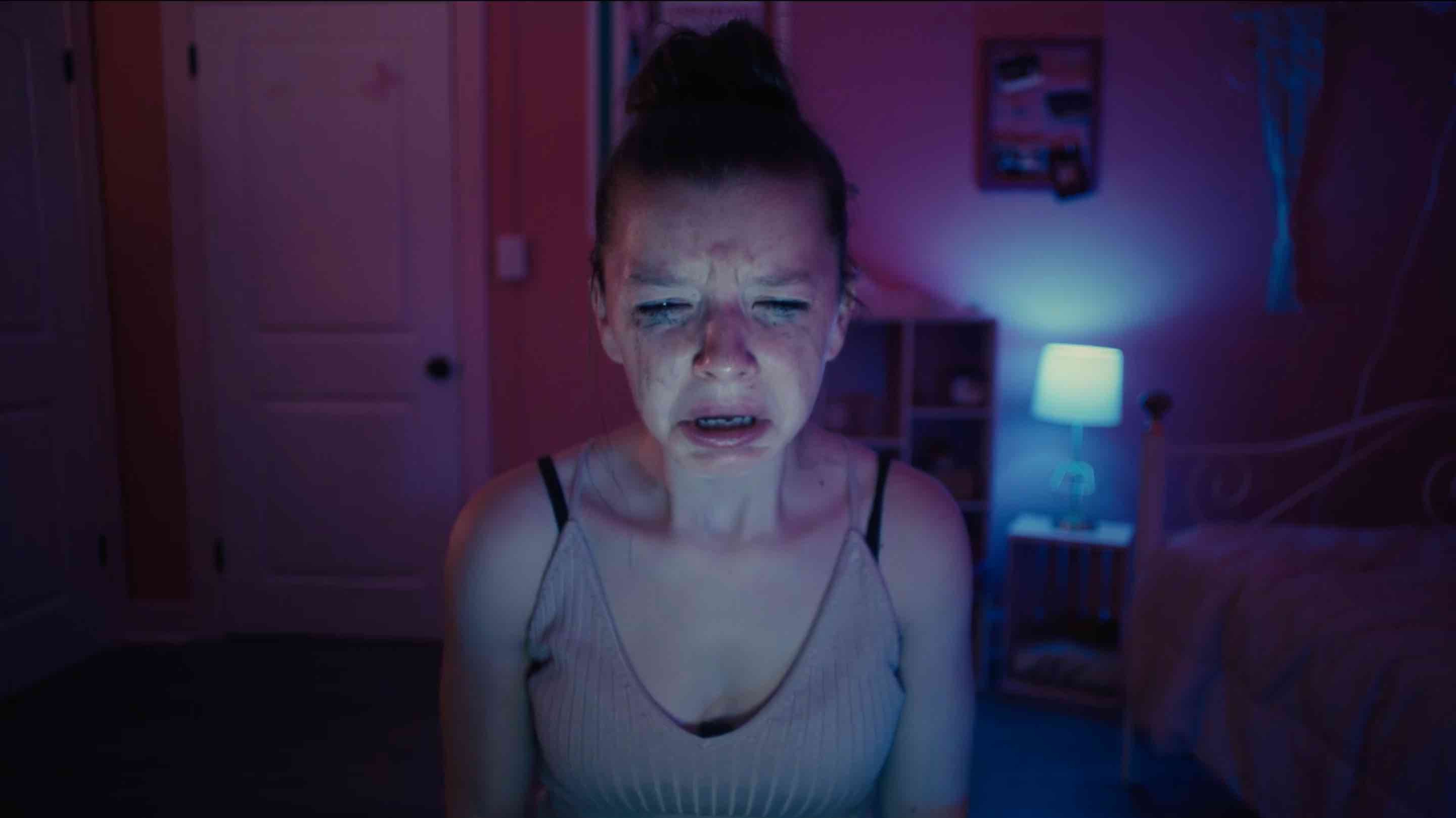 I. IT’S COMING FROM INSIDE THE SCREEN:

II. AN EYE FOR AN EYE

THERE WILL BE MONSTERS / Dir. Carlota Pereda, Spain, 2020 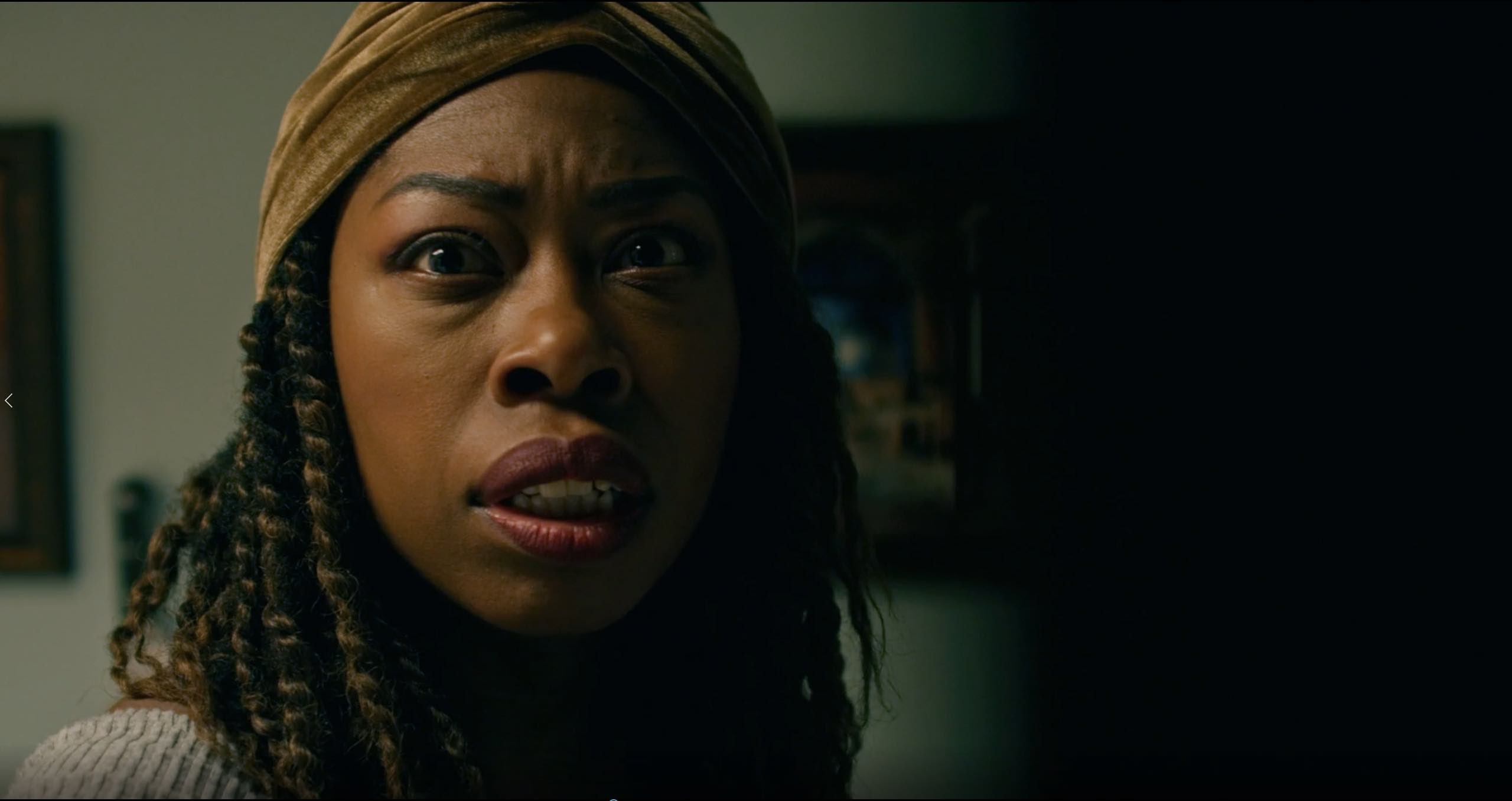 More about The Stylist

More about The Returned