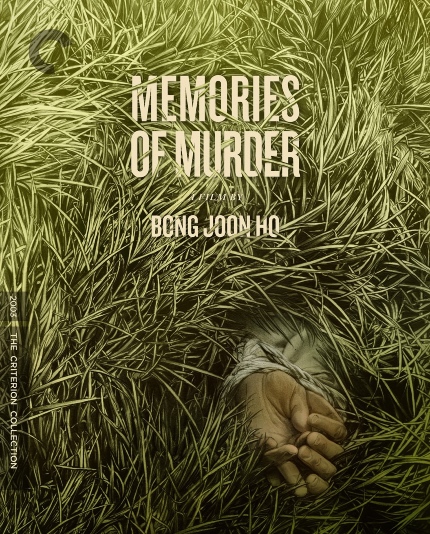 Let's catch up on what's coming soon to home video from the Criterion Collection, aka, "How to Adjust Your Personal Spending Budget in April 2021!"

Bong Joon Ho opened the eyes of mainstream audiences to his distinctive vision of a genre film with Parasite, which means that the time is right for rewinding time to re-discover his masterful handling of a deadly investigation of a serial killer. Memories of Murder is much more than a murder mystery, of course; it's an absorbing, off-beat, and completely unpredictable film that is fairly well essential. Criterion's edition promises to be fairly well definitive, including "two 2009 commentaries featuring Bong and members of the cast and crew, plus a new commentary featuring critic Tony Rayns" plus the following:

• New program featuring filmmaker Guillermo del Toro
• New interview with Bong about the real-life serial killer who inspired the film
• Documentary from 2004 on the making of the film
• Deleted scenes, with optional audio commentary by Bong
• New program about the use of sound in Bong's work, featuring film scholar Jeff Smith
• Incoherence, a 1994 student film by Bong, with a new introduction by the director
• Teaser, trailer, and TV spot

So yeah, get that if you can. If possible, Olivier Assayas' Irma Vep is another title that we're keenly anticipating. It showcases Maggie Cheung in a film about films and the people who make them; I think this will especially appeal to both Hong Kong film fans as an alternative type of film, starring an iconic actress, as well as French film fanatics, especially those who love a take from the 1990s, when it seemed like younger French filmmakers were refracting the history of cinema and taking pokes at a lot of sacred cows. This edition is also packed with archival features that should be fascinating to contemplate.

Naturally, Criterion has not forgotten about classic French film fans, as they will be releasing Jean-Luc Godard's superb Masculin féminin (1966), Frank Borzage's History Is Made At Night, and Anthony Mann's potent melodramatic Western The Furies. Details and ordering information are available at the official Criterion site.

Do you feel this content is inappropriate or infringes upon your rights? Click here to report it, or see our DMCA policy.
Anthony MannBong Joon HoCriterion CollectionFrank Borzagehome videoOlivier Assayas