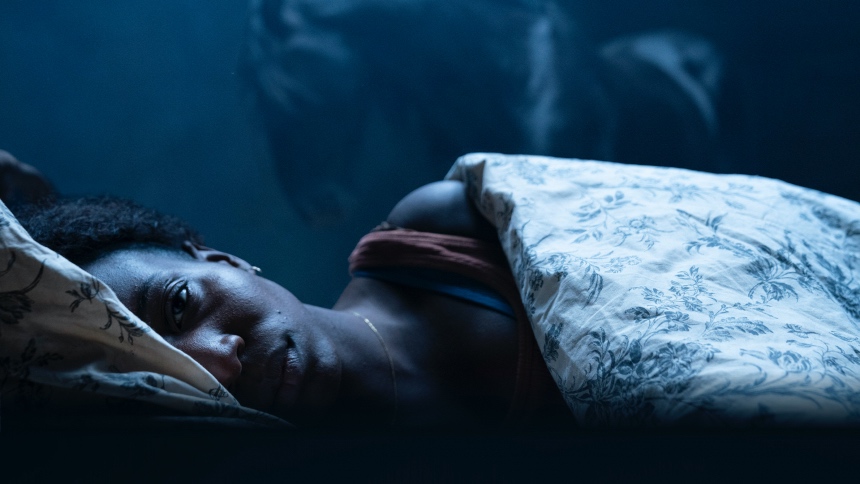 Make friends. Make a lot of friends. And get more than one working cellphone!

Kindred
An IFC Midnight release. In theaters and On Demand November 6, 2020.

Slowly and steadily, director Joe Marcantonio builds a properly combustible atmosphere, leading one to leap to the conclusion that the film could have been titled Kindling.

Alas, its true title, Kindred, is far more accurate, as the surefire premise is squandered over the course of 101 minutes that increasingly wander off course before returning to a preordained path, beset by bewildering artistic decisions that undermine an occasionally harrowing tone. What bolsters the narrative are three strong performances which, together with handsome production design and lush cinematography, make the film -- about the inherent threats posed by members of a family -- barely bearable to behold.

Eighteen months into their relationship, Charlotte (Tamara Lawrance) and Ben (Edward Holcraft) are living in the English countryside, where they moved from London for the sake of Ben's burgeoning career as a veterinarian. Charlotte mucks out horse stalls in the company of a work mate, who is her only friend. The young couple have decided to move to Australia to get a 'fresh start' when Charlotte learns that she is pregnant.

Charlotte is not even certain she wants a baby, but Ben is overjoyed and shares the news with his mother Margaret (Fiona Shaw) and sort-of-stepbrother Thomas (Jack Lowden) during a regular visit to the family's somewhat rundown and isolated estate. Mum is none too pleased, but that pales in comparison to the tragic accident that soon strikes Ben down, and finds Charlotte trapped in the estate by people who are strangers to her, yet insist they are acting on behalf of the unborn child.

Having stripped Charlotte entirely of her agency, it's fair to hope that the film will then enable her to take action, or to fight back in some meaningful manner. Instead, Charlotte begins to resemble a windmill, waving her arms around to no effect, and speaking far more politely toward Margaret and Thomas than might be anticipated.

It may be that the intention was to portray Charlotte as a strong woman who is weakened by circumstances and then is not able to overcome her changed circumstances, due to the outright evil perpetrated by Margaret and her co-jailer, Thomas. Both Margaret and Thomas are given opportunities in the script to shine, as they each, on separate occasions, explain their motives and justify their actions.

It's gratifying to see Fiona Shaw and Jack Lowden explore their wickedly flawed characters with a degree of depth and a measure of empathy. As has been remarked many times before, true villains rarely think they are villains, and both Shaw and Lowden resonate as believable antagonists on that score.

Charlotte, however, is denied that showcase. It must be said that actress Tamara Lawrance aces every emotion she is asked to perform, and does so with grace and subtlety. It's not her fault that her character, as written and directed, is trapped by circumstances, and a worldview, that I found to be immensely frustrating. Why rob someone completely of her agency for reasons that are difficult to fathom and a purpose that is entirely inhumane?

On the other hand, if you subscribe to a dark and fatalistic view of humanity, then Kindred may be a delightful cup of tea, confirming your worst suspicions about people in general, and the rural English countryside in particular.