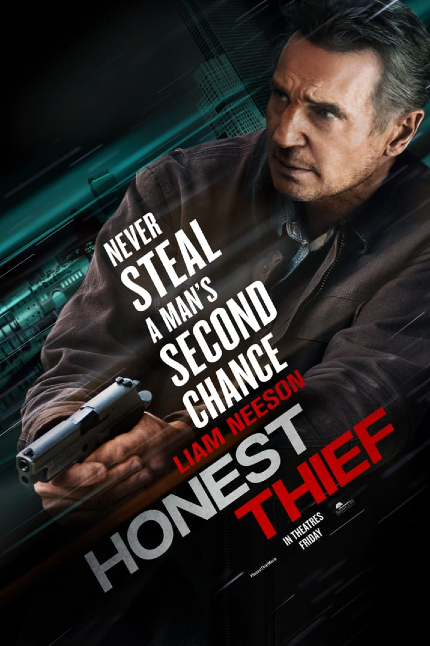 A wily bank robber gets a girlfriend, tries to go straight, and finds corruption instead.

Honest Thief
The film will open in U.S. theaters on Friday, October 16, via Open Road Films and Briarcliff Entertainment.

Liam Neeson has a particular set of skills which have served him well in action movies, especially since Pierre Morel's Taken (2008). Even before that, of course, the actor imbued all his roles with a serious dramatic sensibility, conveying a good measure of authenticity and believability in his characters.

In the six years since the Taken trilogy concluded, he teamed with director Jaume Collet-Serra twice (Run All Night, 2015, and The Commuter, 2018) and also starred in a remake (Hans Petter Moland's Cold Pursuit, 2019), among other roles, keeping himself afloat as a sort of elder statesman among action-movie stars, who are running in short supply lately.

For the record, Neeson is now 68 years of age -- older than Jackie Chan! -- yet he still looks and acts fully capable of kicking the behind of anyone who gets in his way, as he amply demonstrates in his latest action-filled movie, Honest Thief. It's often ludicrous in its narrative twists, yet absolutely sincere in its intentions, and smartly avoids overstaying its welcome.

Known as the 'In and Out Robber' for his deft ability to steal large sums of money from small banks in multiple states over a period of years without being caught -- and not to be confused with the wonderful In-N-Out Burger restaurant chain -- Tom Carter (Liam Neeson) meets the beguiling Annie (Kate Walsh) at a storage facility one day and falls in love. A year later, he decides he wants to make things permanent with Annie, but feels guilty that he has never come clean with her about his past, including the stolen money, totaling some $9 million in cash, that he has secreted in the storage facility where Annie works.

Having finally decided to tell Annie, then confess to the authorities and accept the consequences, old Tom can't bring himself to admit his wrongdoing to the new love of his life. Instead he calls the F.B.I. and speaks to veteran Agent Sam Baker (Robert Patrick), only to find that the F.B.I. is quite accustomed to people making false confessions to crimes they didn't commit.

Baker assigns the case to two younger agents, Nivens (Jai Courtney) and Hall (Anthony Ramos), who, upon finding the stolen cash, decide to take the money and run. First, though, they must deal with Tom, Annie, and Baker, as well as Baker's partner Meyers (Jeffrey Donovan), who is a bit late to join the case but is fully committed to solving it, whatever it takes.

Directed by Mark Williams, who previously helmed A Family Man (2016) but is perhaps better known for co-creating (with that film's writer, Bill Dubuque) and producing the Netflix series Ozark, the original screenplay is credited to Steve Allrich and Williams, and follows standard, modern action-movie precepts, giving the protagonist a few extraordinary abilities that strain credibility, along with at least one supporting character who trusts him implicitly, come what may.

Neeson's Tom is a character chiseled from stone who gradually looks more recognizable as an action hero only after the conduct by the corrupt FBI agents pushes him to new heights of clever self-reliance. What's different is that the script presents the FBI agents with unexpected shades of morality.

Brutally enacted by Jai Courtney, who appears to have been been recently released from years of repressed negative emotions in his more heroic cinematic turns, Agent Nivens makes a turn toward the dark side that steadily grows more potent and dangerous, while Anthony Ramos effectively portrays a family man sliding into temptation as Agent Hall. Initially appearing to be a bumbling and grumbling divorced man with a small dog he doesn't want, Jeffrey Donovan brings Agent Meyers to life with probing intelligence that strikes a welcome counterbalance to the stereotypical portraits of law-enforcement officials prevalent in action movies.

For all the suspect motives that eventually come to the surface, director Williams does a good job of balancing the squealing wheels of the action sequences against the dramatic forces that have moved old Tom to go straight, even if the narrative kept causing me to raise my eyebrows in disbelief. Truth be told, I enjoyed Honest Thief more than I anticipated, mostly for the actors and their juicy performances.

To get tickets and to find out more information about the film, visit the official site.