Now Streaming: CASTLE IN THE SKY, Where Dreams Come True 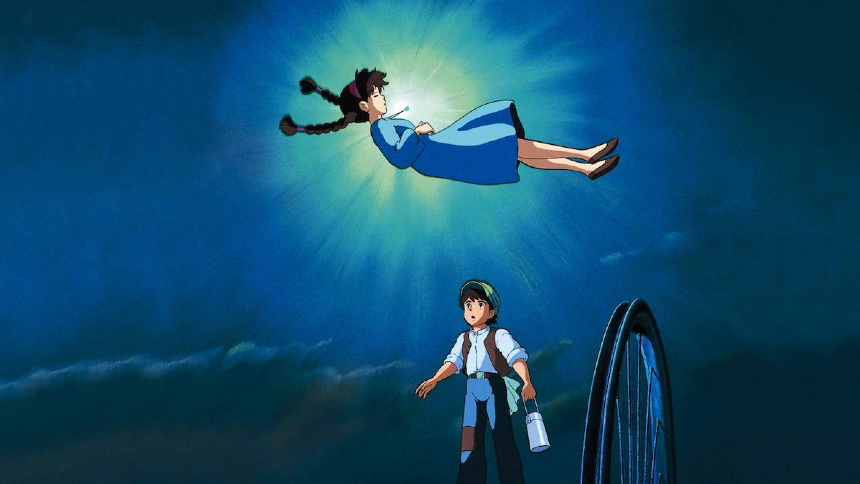 A young girl and a young boy, in search of a legend.

Directed by Miyazaki Hayao, based on his own manga, Nausicaa of the Valley of the Wind (1984) is a dramatically flowing, splendid, if overly earnest, film that is today presented as part of the Studio Ghibli collection on the HBO Max streaming service.

The studio itself, however, was not formed until after that film's success. Its debut release more closely resembled Miyazaki's The Castle of Cagliostro (1979) and Sherlock Hound (1984) in its punchy animation style. (Read more about the film in a Blu-ray review by our own Ard Vijn from 2011, and the film is reviewed by more experts in a fabulous, very charming video presented by our own Kurt Halfyard in 2013.)

Falling from an airship that is under attack, young Sheeta is somehow saved by a blue pendant that she wears around her neck. She gracefully floats to the ground, unconscious, before her body is smashed to bits, and is discovered by a young boy Pazu. As Sheeta recovers, Pazu shares his story of Laputa, a castle that floats in the sky.

Lively and consistently engaging, Sheeta and Pazu form a great team to lead a grand adventure that moves at a lightning pace. Within the structure of a chase that soon emcompasses a variety of locations and characters, both good and bad, Miyazaki always allows time for the dynamic Sheeta and the supportive Pazu to shine through as the lead figures.

The film has lost none of its power to delight audiences of all ages. Nowadays, I often feel assaulted by animated films that are determined to remind continually -- and rather insultingly -- that they are designed for children, as though young people need to be taken by the hand and spoken to as though they are infants.

Miyazaki never does that. He spins stories that have universal appeal because they speak to the adventure that lives within each of our souls, even if we don't know it.

For parents and adult guardians, HBO Max allows the creation of individual profiles for children, which then highlights four "hubs" of content: Sesame Workshop, Looney Tunes, Cartoon Network and Studio Ghibli. Currently, the Studio Ghibli collection on HBO Max features 21 of the studio's 22 feature-film releases, including Nausicaa of the Valley of the Wind, and lacking only Grave of the Fireflies (1988), which is available on Hulu and is a challenging watch, even for adults. The films are available in the original Japanese audio with English subtitles, as well as the English-dubbed versions.

For now, though, I've started watching the Studio Ghibli films weekly, in release date order, and anticipate much more unbridled joy and vigorous adventure from Miyazaki (and company).


Ard Vijn and Kurt Halfyard contributed to this story.

Do you feel this content is inappropriate or infringes upon your rights? Click here to report it, or see our DMCA policy.
animationAwesome 80sHBO MaxJapanMiyazaki HayaoStudio Ghibli

More about Laputa: Castle in the Sky