Now Streaming: THE BLACK CAULDRON, Not Quite Rock Bottom

Directed by Ted Berman and Richard Rich, the animated film, now streaming on Disney Plus, finds the studio at a crossroads in the 1980s. 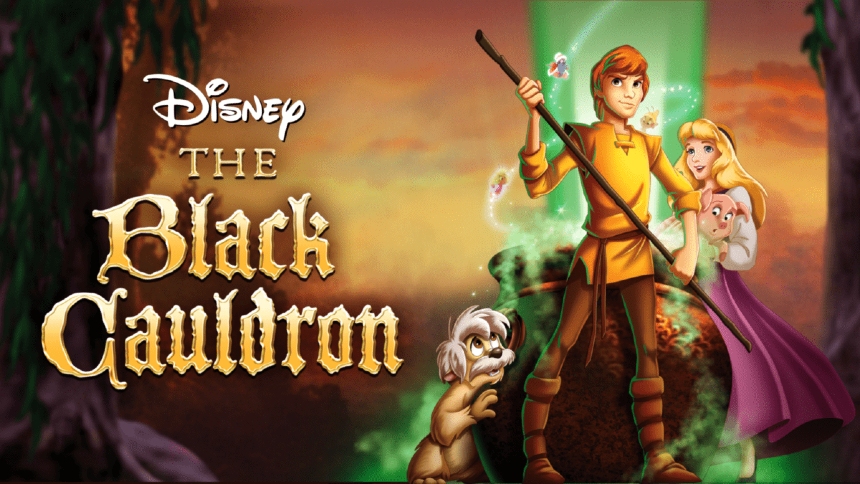 Wake up, Sleeping Beauty, wake up!

The Black Cauldron (1985)
Now streaming on Disney Plus.

In Don Hahn's fascinating documentary, Waking Sleeping Beauty (2009, and also now streaming on Disney Plus), which provided an insider's view of the so-called 'Disney Renaissance' during the 1980s and early 1990s, The Black Cauldron is described as the film in which Walt Disney Animation Studios hit "rock bottom."

Hahn, who also narrates the documentary, served as production manager on The Black Cauldron, but he doesn't contest the point, probably because he has bigger fish to fry than one film. When I first saw the doc several years ago, I hadn't seen The Black Cauldron yet, for reasons outlined in the doc: Disney Studios had become synonymous with outdated children's fare.

By the early 1980s, I'd lost interest in Disney's animated films -- for reasons explained in a previous article about The Rescuers (1977), becoming preoccupied with watching live-action films, especially those aimed at young adults, such as Matthew Robbins' Dragonslayer (1981), and failing miserably whenever I tried to play the video game Dragon's Lair, which was animated by former Disneyite Don Bluth.

The first Disney animated film to receive a PG rating, The Black Cauldron represents the studio at a crossroads, as longtime animators retired and younger animators struggled to establish their own voices, especially after Bluth's departure to form his own company, along with a gaggle of colleagues. In development since the early 1970s, the film was based on the first two installments of The Chronicles of Prydain, a series of five novels by Lloyd Alexander.

Watching the film again, I was reminded more of past Disney films that scared and scarred me in my youth, movies like Darby O'Gill and the Little People (1959, but which I saw in re-release in the mid-1960s) and Bambi (1942, which I saw in re-release in the 1960s). Even reading about Disney's Fantasia (1940) had frightened me. Would The Black Cauldron have the same effect upon me, if I watched it as a child in the 1980s?

As an adult without children or young charges, I paid far more attention to the often awkward mixture of styles. The story is presented as an adventure, as a young man named Taron is sent off a quest to keep an oracular pig from capture by the Horned King, an evil creature who seeks the legendary Black Cauldron, which supposedly contains mighty forces that can enable his intended conquest of the world.

It's the type of story that should conjure up spellbinding magic and mystery, but Disney had been beaten to the punch by better and more imaginative filmmakers in the late 70s and early 80s. The Black Cauldron is fine for what it is, a somewhat plodding, if beautifully animated, tale that never takes flight as it needs to do in order to capture young imaginations.

Today, it's probably more fascinating for what it might have been. As shown in Hahn's Waking Sleeping Beauty, executives Michael Eisner and Jeffrey Katzenberg had come on board the Walt Disney Studios midway through this particular picture, and decided that the film was too dark. Thus, various scenes were cut or trimmed, reducing the running time without adding much, if anything, to improve its overall pace.

Finally released into U.S. cinemas in July 1985, the film was a financial failure, and its critical merits have been debated ever since, though its stock has risen over the years. It's certainly worth another watch, illustrating the perils and pitfalls of Hollywood studio productions. And I thoroughly enjoyed the animation, which represents an era that is long gone from the silver screen.

Do you feel this content is inappropriate or infringes upon your rights? Click here to report it, or see our DMCA policy.
animationAwesome 80sDisneyThe Black Cauldron