It's a good thing that Hollywood studio executives sometimes react on nothing more than competitive frenzy and gut instinct.

On a Monday morning in 1974, studio executive Peter Guber saw that Jonathan Kaplan's Truck Turner had enjoyed a robust opening weekend at the box office for a competing distributor, the independent American International Pictures. In the action-crime picture, musician and singer Isaac Hayes makes his big-screen acting debut as a former professional football player who becomes a bounty hunter. Other than his character's name, though, Truck Turner has nothing at all to do with trucks.

Still, Guber read about the film's success, noted the title, and realized that Columbia Pictures, the major Hollywood studio that he ran, could easily buy the script for the director's planned next project, the truck-themed White Line Fever, which he did immediately. This is the story that director Jonathan Kaplan tells in a "Trailers From Hell" video (available to watch below) and it's a good story.

Even better, White Line Fever is a terrific film that made a lot of money for Columbia Pictures and helped to ensure that Kaplan's career would continue for a while. By that point, Kaplan had helmed four features, debuting with Night Call Nurses for Roger Corman's company, independent distributor New World Pictures.

(In Corman's book How I Made a Hundred Movies in Hollywood and Never Lost a Dime, published in 1990, Kaplan says that he was recommended by Martin Scorsese for that all-important first job; producer Julie Corman called him in New York and offered him the job if he could get to California by the following Monday, and also be prepared to rewrite the movie and edit it too. Later, Kaplan himself would tell the story, with slightly different details.)

The third in the series of "Nurses" exploitation pictures, Night Call Nurses gave Kaplan an opportunity that allowed him to bring along his friends and fellow film-school graduates, Jon Davison and Danny Opatoshu, to Hollywood. (He talks about the experience in a "Trailers From Hell" video, which you can watch below.) Thinking the film was a complete failure, though, Kaplan returned to New York.

Months later, Kaplan got another phone call, telling him that the picture was, in fact, a big hit, and would he like to direct another? That would be exploitation picture The Student Teachers, on which Jon Davison brought out Joe Dante, his friend from New Jersey, to edit the trailer. (Perhaps the friendship explains why Joe Dante is name-dropped in Kaplan's films on more than one occasion).

Kaplan next directed prison drama The Slams, starring Jim Brown, for producer Gene Corman, who despite being Roger Corman's brother, proved to be quite a different sort of producer. (Kaplan talks about that challenging experience in a "Trailers From Hell" video, which you can watch below.) Then came Truck Turner, which fellow director Ernest Dickerson talks about in yet another "Trailers From Hell" video, which you can also watch below.

Jan-Michael Vincent was the studio's choice to star, in view of his recent ascendancy in the wake of supporting roles in Michael Winner's action-thriller The Mechanic, opposite Charles Bronson, (which I wrote about in 2018 and Richard Brooks' Western epic Bite the Bullet (more on that film by yours truly here), as well as his star turn in Southern period romance Buster and Billie. Even though he was not necessarily director Kaplan's first choice, Vincent manifests emerging, potent dramatic force as returning Vietnam veteran Carrol Jo Hummer.

All Carrol Jo wants to do is marry his hometown sweetheart Jerri Kane (Kay Lenz, in only her second feature film, after Clint Eastwood's Breezy and a slew of television appearances), make a little money, and then start a family of his own in the small Arizona town where he was raised. (His beloved father died in the recent past, and he never knew his mother.)

Toward this end, Carrol invests nearly his entire savings into a tractor truck, figuring he can trade on the good reputation established by his late father and his own distinguished military service to make a living as an independent trucker. Carrol Jo quickly gets a load to haul, but soon learns that he's expected to ignore the illegal cargo that he's expected to carry in the trailer, which he rejects out of hand.

First, Carrol is ostracized, then blackballed entirely for his integrity. He fights back, and is treated in an increasingly harsh manner by the lords and demigods, first locally, and then nationally, steadily incurring the wrath of the entire trucking business, or so it seems.

Director Kaplan marshals an array of forces against Carrol, who struggles to maintain an even keel as his friends, family members, friendly supporters, and then his devoted wife Jerri are picked upon by the criminal truckers, who act like rapacious vultures eager to devour a man who they are seriously underestimating. Meanwhile, everyone around him must decide whether they will take a stand, too, either besides him or against him.

I've never seen White Line Fever before, though the television commercial from the 1970s remains jammed comfortably in my mind. So I jumped on the chance to watch it when I realized it was available as part of my streaming package, thinking it was something that it is not. Thus, I too was guilty of seriously underestimating the film's impact.

Grabbing the viewer by the throat early and often, without ever feeling cheap or unfair in its methods, White Line Fever is an enthralling experience. The film consistently steps quickly and convincingly through a morass of morality, arriving at a conclusion that is entirely satisfying. Even reductivist elements that smack of the typical 1970s playlist are rendered in lively tones that belie traditions; Kaplan and company keep on trucking in an immensely entertaining manner.

It's no wonder that White Line Fever resonated with audiences and became a hit. Sad to say, this was also the film on which Jan-Michael Vincent became acquainted with cocaine, according to director Kaplan, leading to many personal issues for the actor. Before his career was derailed, though, he gave very winning performances in an amazing string of films, including Vigilante Force, Big Wednesday and Hooper.

Director Jonathan Kaplan's succeeding project was, in his own words, "my biggest failure," Mr. Billion (once again, Kaplan talks about this experience in a "Trailers From Hell" video, which you can watch below.) He rebounded, though, helming great films like Over the Edge (1979), Hearts Like a Wheel (1983), and The Accused (1988). Eventually, he even got to direct a true western: Bad Girls (1994).

In an age when most of us can only dream of roaming the open highways, White Line Fever drives straight into the heart -- and rams right through it. 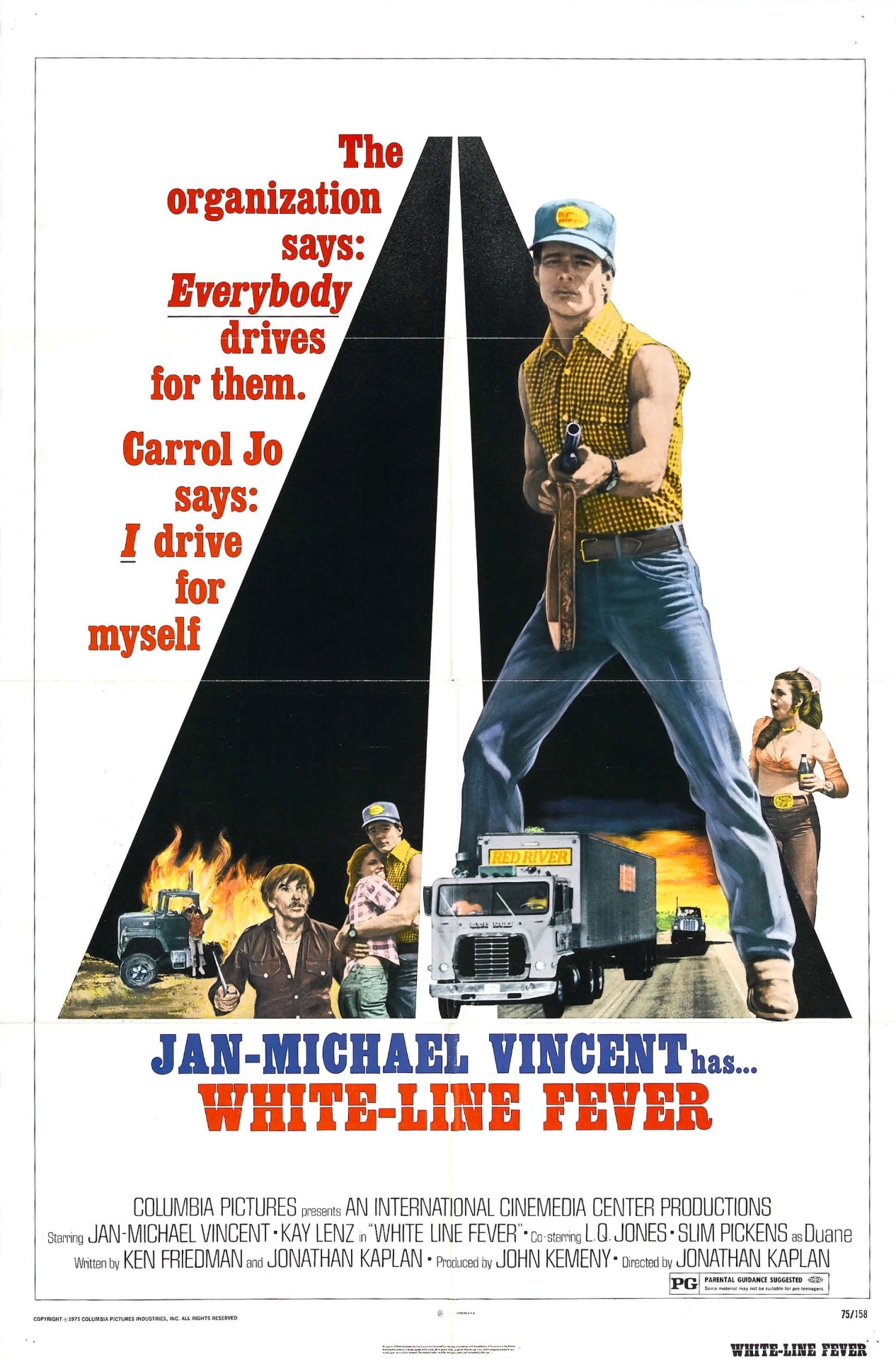 Do you feel this content is inappropriate or infringes upon your rights? Click here to report it, or see our DMCA policy.
Jan-Michael VincentJonathan KaplanKay LenzUS