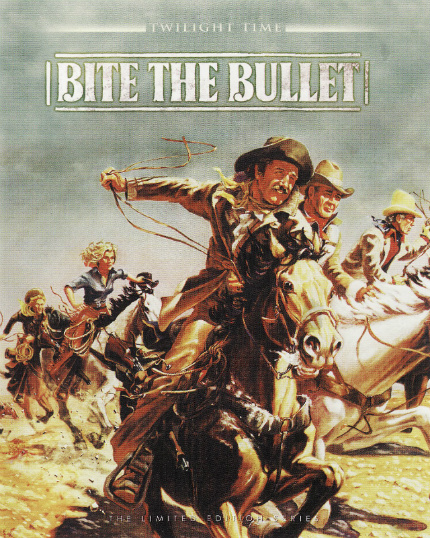 Gene Hackman is a treasure of American cinema. His role in Bite the Bullet is a good example of a less-heralded performance that nonetheless sheds light on his brilliance.

Born in 1930, Hackman served in the U.S. Marines shortly after the conclusion of World War II and then labored at various jobs before trying his hand at acting, both on stage and in various TV shows. His stage work led to his film debut in Lilith (1964), starring Warren Beatty, and that led to Bonnie and Clyde (1967) and his Academy Award nomination as Best Supporting Actor.

My first screen memory of Hackman dates back, I think, to seeing him when The Gypsy Moths or Marooned (both 1969) played on TV. He stood out visually with his face; he looked like he'd bitten something sour, which reminded me of some of my relatives. The command and weight and tone of his voice cut through any argument.

Picking out a few favorites from the first half of the 1970s -- The French Connection, of course; Prime Cut; Scarecrow; The Conversation, of course; Young Frankenstein, of course -- makes me realize how busy he was during those years. In 1975 alone, he could be seen in four new films: French Connection II (May) and Night Moves (June), which both feature extraordinary performances, as well as Lucky Lady (December), which I haven't seen yet.

In late June 1975, when Bite the Bullet was released, I was completely absorbed by Jaws-mania, which was cresting at the time. I was overjoyed to be able to see Jaws in a local theater, thanks to my older brother, and it was an incredibly satisfying film for my young self.

As for Bite the Bullet, it didn't have the same appeal for me as Jaws, The Return of the Pink Panther or Love and Death, all movies I saw in theaters that summer. (Of course, summer was pretty considered a dead time for movies in that era, which is part of what made Jaws so unexpectedly great.) I don't remember being particularly interested in Westerns at the time, or in any of the stars. (That would come later.) 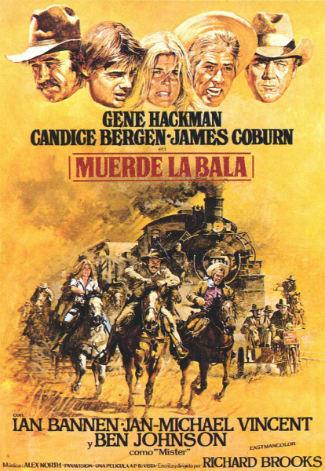 How wrong I was. The film itself is oddly paced; the characterizations are, at times, truly bewildering; and the tone veers unpredictably from one sequence to the next. [That may be explained by the report that production began before the script was completed.) It's more of an ensemble adventure than I had anticipated, following a cross-country horse race in 1906 that attracts a cross-generational group of riders. Yet Hackman's performance, especially, raises it above the noise.

Inspiring by a real-life race, Richard Brooks wrote the original screenplay, produced and directed. Born in 1912, Brooks began writing for newspapers, radio stations, and then films (the latter in the early 1940s) before serving in the U.S. Marines for a couple of years during World War II. His directorial debut came in 1950's Crisis, and he enjoyed great success for years, right up through his independently-made Western The Professionals (1966) and In Cold Blood (1967).

Like his other, later films, Bite the Bullet features certain sequences that are strongly compelling, mixed with scenes that feel slipshod and unscrewed. In view of Brooks' many years of experience, it may be that he wanted to shake off audience expectations. In this case, we have a much more dramatic and adventurous cross-country race than, say, Blake Edwards' purely comic The Great Race (1965).

Hackman arrives to the race after the other leading contestants, namely, James Coburn (as an desperate old friend and fellow Rough Rider under Teddy Roosevelt), Candice Bergen (a woman with an unsavory past and mysterious motives), Ben Johnson (an old-timer), Ian Bannen (a Brit who just wants to have a good time), and Jan-Michael Vincent (a young, arrogant kid). Hackman is positioned as the favorite to win the race but, in perfect 70s throwaway style, he never seems to evince any desire to win.

Instead, he just keeps helping the other contestants, even if it appears to hinder his own chances at victory. And this where Hackman shines: he's not playing an anti hero or an intense protagonist driven by inner demons, he's portraying a good guy! With no ulterior motives! Bursting with kindness!

Of course, this is Hackman, working from a script by Brooks, and so the character is not a stereotypical "good guy," but someone whose deepest motivations remain hidden throughout. Is he sincere in wanting to help others? What is it that truly drives him? What made him into the man he is in the film? We'll never know.

His calm, reserved positive spirit spills over whenever he appears on screen, and when he's not present, I found myself wondering, 'Well, what's he doing now?' It all leads up to an ending I did not expect.

The limited-edition Blu-ray release of Bite the Bullet appears to have gone out of print, unfortunately, but it features a fine transfer, showcasing awesome photography by Harry Stradling Jr. and an Academy Award-nominated musical score by Alex North. In the accompanying print booklet, Julie Kirgo notes Brooks' claim that the script wasn't completed before production; instead, he "wrote feverishly" during production!

I'm glad to have caught up with Bite the Bullet, especially so that I could allow Gene Hackman's performance to fully sink in. He may be retired from acting, but the characters he brought to life remain vividly memorable and worthy of careful study.

70s Rewind is a biweekly column that allows the writer to explore his favorite film decade.

Do you feel this content is inappropriate or infringes upon your rights? Click here to report it, or see our DMCA policy.
70s RewindGene HackmanJames CoburnRichard BrooksTwilight TimeWestern