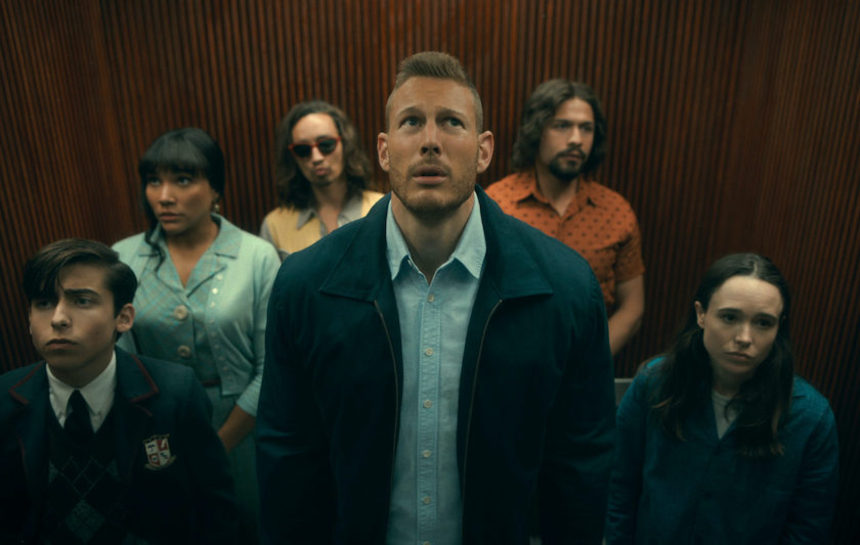 It’s a common issue faced repeatedly by Marvel Comics’ mutant X-Men (see, e.g., the Dark Phoenix storyline) and in Gerard Way and Gabriel Bá’s comic-book series for Dark Horse Comics, The Umbrella Academy, and the Netflix series heading into a second season (i.e., different season, same or similar apocalypse). That executive producer Steve Blackman, his writing staff, and actors manage to deliver a fresh, almost endlessly engaging, entertaining riff a second time around on tried-and-true (and tired) superhero tropes is something of a minor, if no less welcome, miracle, flawlessly combining drama, humor, and action in impressive fashion.

When we last left the Umbrella Academy’s titular members, the Hargreeves’ clan, seven dysfunctional siblings, at the end of season one, they not only failed to stop or forestall a world-ending apocalypse, caused in no small measure due to their mistreatment, if not outright abuse of the seemingly non-powered Vanya (Ellen Page), their space-warping, time-traveling brother, Number Five (Aidan Gallagher), made the equivalent of a desperation play, hurtling the entire clan back in time to avert the world-shattering catastrophe they themselves caused.

Number Five erred slightly, however, sending the Hargreeves far back in time, depositing the members of the Umbrella Academy clan across early 1960s Dallas, Texas, forcing the scattered siblings to make new lives for themselves without the superhero costumes, expectations, and respective reputations that defined and constrained their lives as teens and adults.

For Allison (Emmy Raver-Lampman), that meant leaving her mind-control superpower behind, working in a beauty salon, getting married, and more importantly, becoming a civil rights activist. For former No. 1 Luther (Tom Hopper), life without his siblings, especially long-time crush Allison, meant taking a job as a bodyguard, bouncer, and fight club participant (he’s still working on his Ph.D. in Brooding), while the more recently arrived Diego (David Castañeda), leans into his messiah/savior complex, attempts to warn the local authorities of John F. Kennedy’s pending assassination, and promptly gets thrown into the local mental hospital.

Despite ending the world in the original timeline, Vanya arrives in the past, almost immediately runs into oncoming traffic, and runs into a car driven by a local housewife, Sissy (Marin Ireland), blissfully minus the memories of her superpower or the world she destroyed in the future. For the egotistical, narcissistic Klaus (Robert Sheehan) and his superpower (he can communicate with the dead, a blessing/curse, etc.), he starts a proto-New Age hippie cult with himself at the center with only the ghostly presence of his long-dead brother, Ben (Justin H. Min), to counsel Klaus through his worst excesses.

For Number Five, fresh from briefly seeing a second, earlier apocalypse, a nuclear exchange between the United States and the Soviet Union starting two days after the presumed assassination of President Kennedy, there’s no time like the present time to scoop up his errant siblings and convince them to save the world (again).

For all of its standout strengths, quirk-filled tone, and earworm-worthy needle drops, the first season suffered from an all-too-common comic-book problem: Writing for the arc or series rather than individual episodes (in comics, it’s called “writing for the trade,” the six-issue collection of a specific story arc). Too many episodes lost momentum in repetition and over-explanation.

Rather than letting the relationships between the Hargreeves grow and develop, they stagnated in circular recriminations and slights. At least in part, though, the first season was meant to explore how bad parenting ― thanks or rather no thanks to their now-dead autocratic, authoritarian father, Sir Reginald Hargreeves (Colm Feore) ― can leave long-lasting, personality-warping marks on the individual and collective psyches of the children, made all the worse by the revelation that the elder Hargreeves adopted the seven super-powered siblings primarily as an experiment in superhero parenting. Still, the first handful of episodes felt both overlong and underwritten, at least until Vanya’s long-suppressed superpower finally began to assert itself over both the story and siblings.
Thankfully, the second season doesn’t suffer from pacing problems or momentum issues. Forced to depart from the source material (the first season combined elements from the first and second trade collections), Blackman and his writing staff give every member of the Hargreeves clan a compelling, standalone arc of their own. Even when the larger “let’s get together and avert the apocalypse again” storyline slips into the background, the individual stories of the time-lost siblings keep moving forward.

Vanya seems to find peace and possibly romance living with Sissy and her family. Much to his surprise and disappointment, Klaus discovers that the role of self-appointed cult leader has its costs and consequences, while Diego surprisingly discovers a kindred spirit in Lila (Ritu Arya), a fellow inmate at the asylum with curiously advanced fighting skills. Luther, still burdened by his late father’s outsized expectations, wallows in self-loathing and self-abnegation through bare-knuckled, sadomasochistic fighting in underground clubs, while Allison, more than any other Hargreeves character, finds meaning, purpose, and community in the struggle for civil rights (as relevant today as it was in early 60s Texas).

Of course, for fictional superheroes, living normal, non-superhero lives isn’t meant to last. However content or happy the Hargreeves are, we know and they know that events will conspire to end that happiness or contentment. That realization runs through practically every scene when the Hargreeves aren’t together and/or deciding how or whether to stop the next apocalypse (like the first apocalypse, it could be self-fulfilling, directly due to the Hargreeves intervention, not the opposite, a discussion that can lead everywhere and nowhere at once).

On its own, it might seem cliched or banal, but over the 10 episodes of the second season, the “all good things must come to an end” realization adds a level of poignancy and dimensionality to the Hargreeves missing from otherwise standard superhero fare. For all of their superpowers, they’re filled with doubts and frustrations, anxieties and desires, making them recognizably, fallibly human. And with an ending that raises more questions than it answers, a third season of Netflix’s best superhero series should be inevitable, if it isn’t already.

The first season is now streaming on Netflix. Season 2 will be available to stream on Friday, July 31, 2020.

Do you feel this content is inappropriate or infringes upon your rights? Click here to report it, or see our DMCA policy.
Ellen PageNetflixThe Umbrella AcademyTom HopperUS