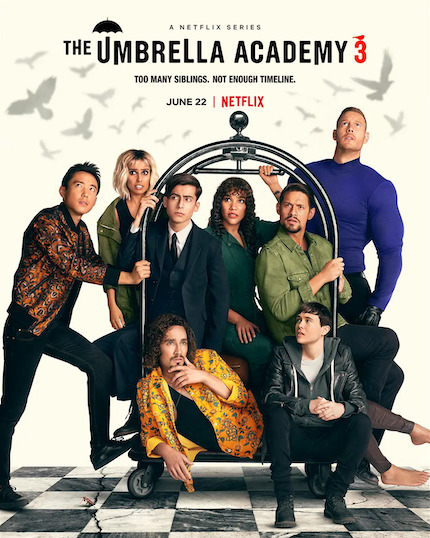 Almost two years after the second season of The Umbrella Academy, Netflix’s multi-season adaptation of Gerard Way and Gabriel Bá’s award-winning, comic-book series for Dark Horse Comics, the third season arrives on the struggling streaming platform not a moment too soon (or too late).

That's especially so, considering that the second season, like the first, ended on a supremely tantalizing cliffhanger setting the title characters, a dysfunctional superhero family adopted by an eccentric billionaire with a dubious agenda, Reginald Hargreeves (Colm Feore), against an alternate timeline version of the team filled not with alternate selves (one exception notwithstanding), but an entirely new, different superhero team, the Sparrow Academy, less superficially dysfunctional and far more efficient than their deposed contemporaries.

Given the set-up of strangers claiming ownership over their mansion home, it’s also entirely predictable that the first episode’s opening scene begins with a superhero team on superhero team throw-down with our familiarly ill-fitting superhero team getting their rears handed to them. It’s hard, if not impossible, to imagine a better start for the third season of The Umbrella Academy.

In just one scene, the third season sets up the premise of displaced, disoriented superheroes, their slightly fascistic replacements, and a season-long conflict between the two teams. Not so fast, of course, as once again, there’s a Big(ger) Bad for the Umbrella Academy and their superhero competition.

And just like seasons one and two, the new, overarching problem remains the Umbrella Academy’s repeated inability to come together, set aside their considerable differences and differing worldviews to defeat or overcome the latest, potentially catastrophic event. It’s no longer the world or a timeline that’s at stake, but the entire universe. (Talk about upping the existential threat.)

In a lesson members of the Umbrella Academy refuse to learn, going back in time to change history can lead to expected and unexpected consequences, the latter often far worse than they (or the audience) could have imagined.

For Allison (Emmy Raver-Lampman), aka “Rumor,” leaving 1963 Dallas meant leaving the love of her life. Returning to an alternate present also means that the other love of her life, her daughter, doesn’t exist anymore.

It’s enough to flip Allison from flawed, if sympathetic, superhero, to borderline villain status as she tries to manipulate the people around her, including her immediate family, and events to get what back what she’s desperately lost. It’s both a recipe for personal and collective disaster and for the Umbrella Academy itself, par for the apocalyptic course after two self-fulfilling, season-long prophecies in a row the team attempted to prevent after causing it themselves.

Taking a comic-book page from Amazon Prime’s The Boys, the Sparrow Academy represents the commercialized, corporatized side of the superhero game. Giant banner ads proclaim “Crime is the problem and the Sparrow Academy is the solution,” suggesting that the best, only answer to crime in all of its vaguely defined manifestations involves violence or the threat of violence (hello, fascism).

Not surprisingly, the initial episodes paint the Sparrow Academy in clear opposition to the Umbrella Academy, but as the season-long arc moves forward across another 10 episodes, moments of nuance slip into the central plotline and the related, interwoven subplots.

That does mean, unfortunately, that essentially doubling the central cast necessarily means reduced time for the regular members of the Umbrella Academy itself. Still, they remain a welcome sight, from Klaus (Robert Sheehan), perpetually tripping on himself, to Luther (Tom Hopper), the lunkhead muscle with a heart, to Diego (David Castañeda), the knife-wielding, rage-filled vigilante who always chooses violence, to Five (Aidan Gallagher), the nominal, time-traveling leader, and on through Victor (Elliot Page), the seventh and most powerful member of the Umbrella who almost caused the end of the world twice.

While the third season has its usual share of tangents, switch-backs, and cul-de-sacs story-wise, it re-finds its footing in the last two or three episodes and just as, if not more, importantly, handles Victor’s transition (mirroring Page’s own real-life transition) as a trans man with admirable delicacy, subtlety, and respect. Victor’s transition is handled in a handful of brief, if no less effective or effectively moving, scenes, culminating with the ever-earnest, well-meaning Luther suggesting they throw Victor a party (less because Victor needs one than Luther’s desire to throw one).

As a template for handling a character’s in-series transition, The Umbrella Academy gets it just right, embedding Victor’s transition in another well-made, engagingly memorable season that feels less like an ending than a new beginning.

The third season of The Umbrella Academy begins streaming Wednesday, June 22 on Netflix. 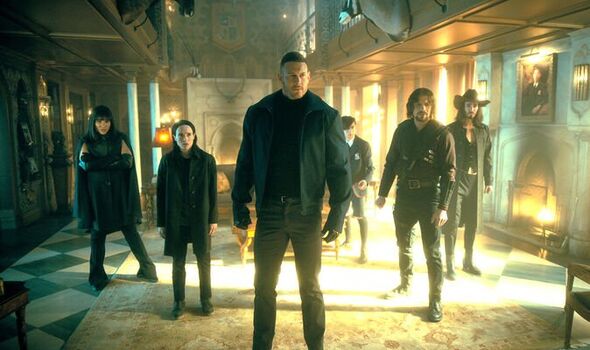