Many, many people die in the masterful anime series from Science Saru (Yuasa Masaaki and Ho Pyeon-Gang), now streaming on Netflix. 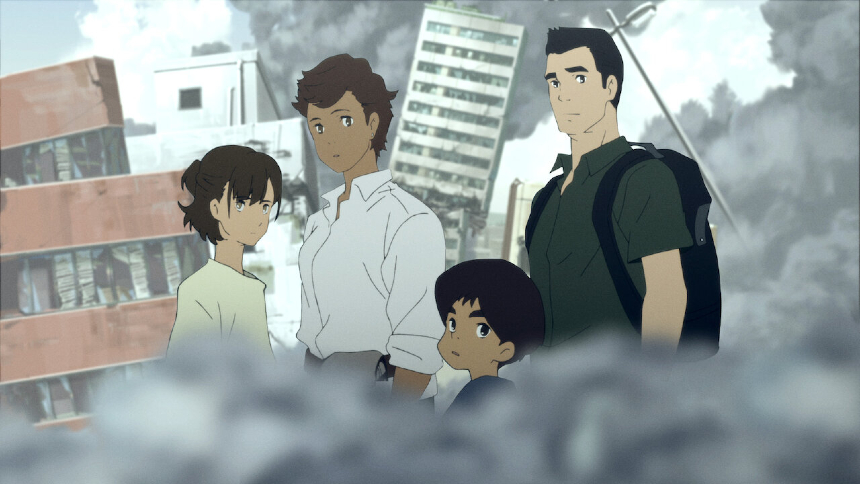 My heart nearly burst. And that was just the first episode.

Netflix is trying to kill me.

The idea of watching all 10 episodes of a new adaptation from Science Saru straight in a row became overwhelming after I watched the first episode of Japan Sinks 2020, which introduces multiple members of a family who come together as Japan is struck by one massive earthquake after another within the span of a few hours.

Announced in October 2019, the series was intended for release so to coincide with the Olympic Games, originally scheduled to begin on Thursday, July 23, 2020. The games have been postponed until next year, but the return of the worldwide event to Tokyo, Japan, for the first time since 1964 (see also Ichikawa Kon's magnificent Tokyo Olympiad) inspired a flock of anime shows this year, meant to capitalize on the increased attention and interest.

Except it's Yuasa Masaaki.

Within the past three years alone, his credits include the feature films Lu Over the Wall and Ride Your Wave, and the anime series Keep Your Hands Off Eizouken!, the latter a particularly joyful endeavor, and so it was with this in mind that I sampled the first episode of Japan Sinks 2020, even though I was frankly wary of venturing into anything approaching a disaster series.

As noted above, my heart nearly burst from the first episode, and I resolved not to watch anymore, and I considered mounting a campaign to criticize Netflix for daring to suggest that I binge-watch a show of such devastating emotional crescendos that I was left in tears. And then, the next day, I watched the second episode, which left me an emotional wreck.

From my personal standpoint, Japan Sinks 2020 is definitely not for children. It may not be for most adults. It is self-rated TV-MA, which often warns me away, due to the tendency of some creative types to indulge in profanity, disturbing and violent imagery, and/or sexual situations, just because they can, not for any purposeful creative intent.

Except it's Yuasa Masaaki, and so when disturbing and violent imagery appears, it is always for a specific purpose. (For comparison's sake, it's not quite at the heights achieved by Grave of the Fireflies (1988) for emotional disturbance, but it came close for me.)

A survival tale, a disaster series, an adventure, a thriller, a love story, Japan Sinks 2020 is most of all about a family and what happens to them when the worst thing they could ever have imagined happens to them, their friends, their neighbors, their country, and the world where they live.