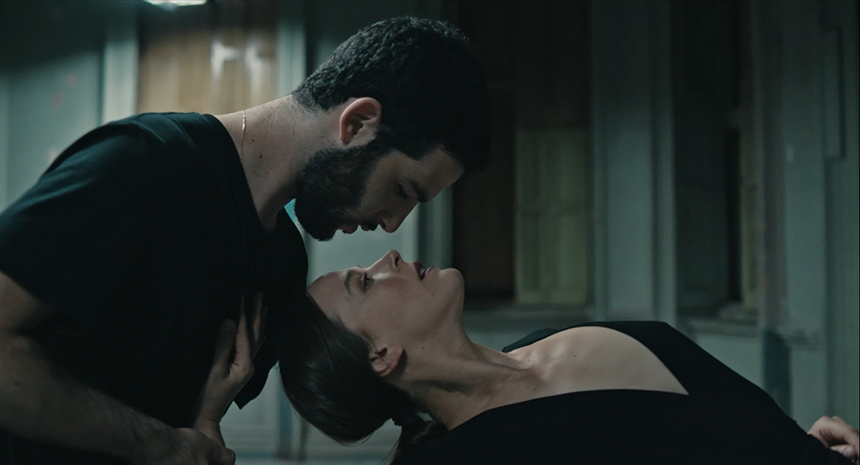 It seems dance movies are in vogue again as of late, with Gaspar Noé's Climax, Luca Guadagnino's Suspiria, Levan Akin's And Then We Danced and Luka Dhont's Girl, among others. Writer/director Boaz Yakin (Fresh, Remember the Titans)'s new film Aviva is a stunning new vision about gender fluidity, in close collaboration with dancer/choreographer Bobbi Jene Smith.

The film starts with Eden, or a part of Eden, played by Smith, in bed and naked, directly looking at the camera, telling us she is indeed playing a part in a movie we are watching. She states the movie is written by a man, and for all intended purposes, she is playing a man named Eden (also played by Tyler Philips). She says it's about her best friend, Aviva. Aviva also is played by a woman (Zina Zinchenko) and a man (Or Schraiber). Confused yet? Yakin plays around with our society's perception of the typical man/woman dichotomy and polysexuality within us all, in an exuberant, sensual, free form filmmaking with the help of the all-professional dancer cast.

Eden (Philips) is a New Yorker recovering from a devastating breakup. He is introduced to Aviva (Zinchenko), an ambitious Parisienne by a mutual friend in Europe. They start their email correspondences and hit it off and they both feel that they are a great match. Aviva takes a leap of faith and decides to come to New York and meet Eden. He is happy about the news of finally meeting Aviva in person, but his expectations are so high, he is somehow afraid of disappointing her or himself.

After they get together, and Aviva decides to permanently move to the US, Eden has a hard time truly connecting with her. He avoids eye contacts while having sex with her, and he'd rather hang out with his buddies at the bar by himself than inviting her in to the fold.

At the same time, with the male part of Aviva (Schraiber), Eden has great time sexually, even though he feels ambivalent about not being on top. In order for Aviva to stay in the US, they have to get married and after a considerable persuasion from his feminine side (Smith), Eden reluctantly marries her. Aviva pursues her ambitions in being a film director and starts exercising her creativity.

If the above description of Aviva's plot is a little melodramatic, that's because it is. The film's strength lies in its daring physicality and energy. To be honest, even though there are plenty of beautifully choreographed dance scenes in the backdrop of New York and Paris streets, in bars and empty warehouse spaces, I still wanted less talking but more dancing. It could've been a little more abstract just seeing graceful human bodies moving in close-up and let them convey the all the meaning.

Using 2 compact, highly mobile Canon C300 high-resolution cameras, Yakin succeeds in capturing those moves in fluid motion. Sensationally choreographed, Smith and co.’s dance interpretations of the push and pull of gender politics, heartache and loneliness, triumphs and soul searching that reside within all of us are all exhilarating to watch and at times, extremely moving.

The traditional notion of gender roles is still a hard concept to let go for many, because of centuries of social conditioning. The dominance of male gaze in mainstream media is well-documented facts. Male nudity, depiction of nude bodies and gay sex are still very much taboo. But as Aviva says with a hopeful smile, at the end of the film that things are changing. Yakin seems to want to challenge these evidently uncomfortable notions with Aviva.

The film's free flowing style doesn't always work - like the scene where little white kids break out rapping in the streets and subways, or male Eden thinking out loud if he wants to spontaneously start singing even though he hates musical are too precious and too self-conscious to work. But its bold, energetic and progressive representation of gender and body politics is sure to be a modern classic in the making.

Do you feel this content is inappropriate or infringes upon your rights? Click here to report it, or see our DMCA policy.
Boaz YakinBobbi Jene SmithFranceTyler PhillipsUSZina Zinchenko