70s Rewind: ESCAPE FROM ALCATRAZ, We Gotta Get Out of This Place

Clint Eastwood stars in Don Siegel's muscular drama, based on a true story and now streaming on Amazon Prime Video. 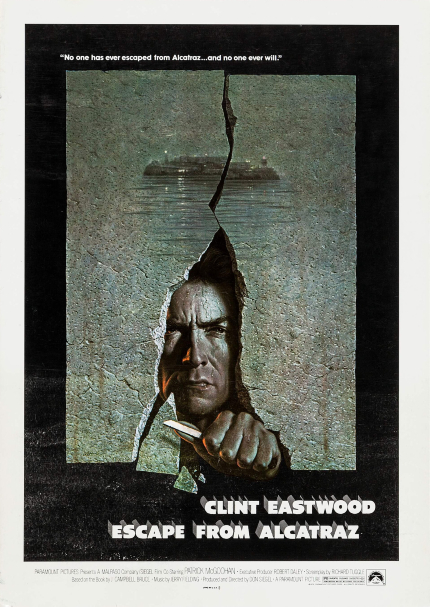 Maybe it's the pandemic, maybe it's just me, but I empathized more than ever with a convicted criminal, locked up in an impregnable prison facility.

What timing! Recently, I revisited John Sturges' The Great Escape, which pits good vs. evil in a grand, military adventure. Based on a true story, producer/director Sturges' film follows heroic Allied soldiers as they strike back against evil Nazi forces.

For a change, please, consider producer/director Don Siegel's muscular drama. Based on a true story, it follows convicted criminals as they endeavor to escape from the fabled Alcatraz Federal Penitentiary, located on an island a mile away from San Francisco, California.

Released in June 1979, the film featured the final teaming of Siegel with Clint Eastwood, a partnership that began in 1968's Coogan's Bluff, right after the actor scored worldwide box office hits, thanks to his partnership with filmmaker Sergio Leone. As I've written before, "Siegel's riveting, mid-tempo style of action suited Eastwood well," and they then made the off-beat, unpredictable Two Mules for Sister Sara (1970) and The Beguiled (1971), before capturing the cultural zeitgeist in Dirty Harry (1971).

For Eastwood, Escape From Alcatraz was sandwiched by populist comedies Every Which Way But Loose (1978) and Bronco Billy (1980). As it happens, the former was the first Clint Eastwood film I'd seen in a theater, and so the prospect of seeing him in a drama was very appealing in the summer of 1979.

Revisiting Escape From Alcatraz, which recently became available on Amazon Prime Video, was a complete pleasure, though I'd forgotten how much of the film unfolds with very little action, per se.

The prison, operated from 1934 until 1963, was known as a maximum-security facility where troublemakers were held (shades of The Great Escape). Unlike John Sturges' film, however, the protagonist here, Frank Morris (Eastwood), is no hero.

Instead, he's a career criminal who has escaped from other prisons before, which is why he was transferred to Alcatraz. The steely-eyed, stiff-jawed warden (Patrick Magee, also in Siegel's Telefon) lays down the law to Morris, who steals a fingernail-clipper right off the warden's desk during their brief meeting.

Clearly, Morris has an instinctual desire to escape. The film supports that notion, showing guards who are not entirely monstrous and featuring fellow prisoners who are sympathetic and supportive. Naturally, the warden is evil -- Magee makes for a smug, villainous figure -- as well as some of the guards and a few fellow prisoners.

For the most part, though, it feels like the prison is pulling for Morris to defy all the odds and escape with his life. Morris makes, if not friends, then comrades among the other men, including Paul Benjamin, Roberts Blossom, Frank Ronzio, Larry Hankin, plus, later, renews his acquaintance with newer transfer-ees Fred Ward and Jack Thibeau. Those empathetic chords reach out and embrace the viewer; we know that Frank Morris is a criminal, but it's Clint Eastwood, really, and we pulled for him in the 1970s.

Displaying his subtle, supreme mastery of the craft of filmmaking, director Don Siegel employs superb control of the frame, constantly inviting the viewer into the action, even when that action is expressed entirely on Eastwood's face. The power of the film is not diminished, even when watching on a small screen.

Do you feel this content is inappropriate or infringes upon your rights? Click here to report it, or see our DMCA policy.
70s RewindAmazon Prime VideoClint EastwoodDon SiegelFred WardPatrick Magee