Review: THE GRAND BUDAPEST HOTEL, An Ode To Joy 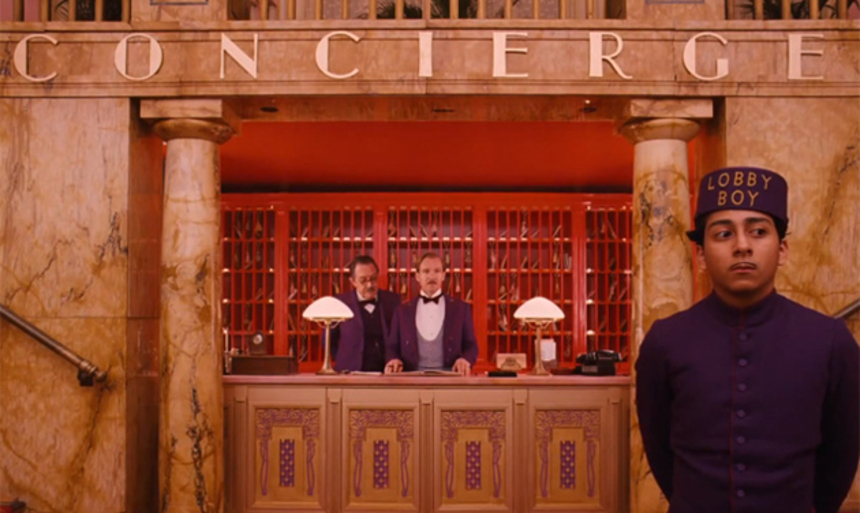 Regrettably, Beethoven got there first. In another world, The Grand Budapest Hotel, a celebration of wit and style and class, an example of a technical master working at the top of his craft, a work as warm and genuinely funny as its director or any of its stars have made, in another world it could just easily have been titled "Ode to Joy".

I don't know if this is the film Wes Anderson has been building towards, or if it's simply an example of the planets aligning in just the right way, but there is something The Grand Budapest Hotel that feels valedictory. Maybe valedictory isn't the right word. Though I doubt Anderson is kissing his particular style goodbye (safe to bet he's not going mumblecore any time soon), there is something in the way he employs his very unique voice that feels different here, that feels right.

It is certainly his most stylized film to date, and that says a lot. Make a mental list of all the things you think of as Wes Anderson-y and then turn it up to 11, you'll get an idea. But at no point does the film feel suffocated by all that affect. It is remarkably nimble, light on its feet. Which is due in large part to Ralph Fiennes' work as M. Gustav, in a performance soon to be considered one of his very best.

Let's back up for a second. M. (that's French for monsieur) Gustav is our film's hero. It is 1932 and he is the chief concierge at the opulent Grand Budapest Hotel, located atop a snowy mountain in the country of Zubrowka (a fictional place, though a real and wonderful vodka). He runs his luxury resort as a benevolent prince, going out of his way to see that his guests want for nothing. One responsibility he takes particularly serious is in, shall we say (for M. is nothing if not discreet), comforting his elderly, female clientele. And things are going just swimmingly until one of them is found murdered, and Gustav stands accused. There is also a brewing war, and those colorlessly homogeneous Fascists (The Zig Zags, or ZZ), who seem to grow more and more powerful each day...

That is as bare-bones a description as you can get for a film that has a lot more going on in the narrative, and a hell of a lot more in the frame. But the what and the why are less important in this case than the how. While Gustav is our protagonist, he is not, however, the film's subject.

The film is told through a Russian nesting doll-like series of perspectives. It begins with a young girl reading a book, title same as the film, at its author's grave. We then flash back to the 1980s, when the then-living author reflects back on his writing of said book, and how it was inspired by a meeting he had many years before at the titular hotel. Flash back to that, where the hotel's older proprietor greets the younger author and tells him of his time as a lobby boy under the tutelage of M. Gustav during its heyday. Cue 1930's, cue Ralph. 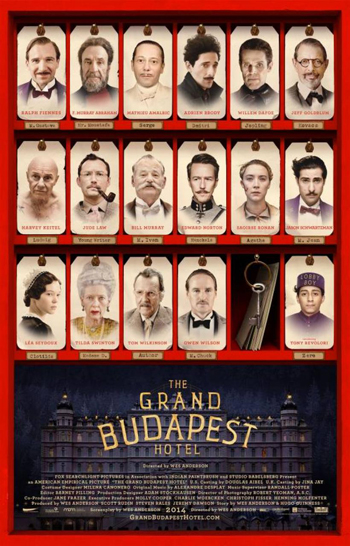 Some are quick to critique the film's dense through-line as yet another example of Anderson's unnecessarily, and self-consciously, Baroque style (each perspective, for example, is shot in a different aspect ratio), but they are totally missing the point. Anderson himself gives the game away at the very end, where a title card states that the film was heavily inspired by the work of Austrian writer Stefan Zweig. Which is to say nothing of the film's very first line of dialogue, (cribbed, as it were, from one of Zweig's books) where the unnamed Writer categorically states that authorship is not a matter of creating/imagining stories, but of simply paying attention and transmitting ones that already exist.

That the director with the world's most easily recognizable style should open his latest work with a direct strike against the heroic ideal of 'go-it-alone' auteurism is provocative enough. What then follows is his most directly referential film. That famous carpeting from The Shining? There as wallpaper in the background. Those WWII-era Technicolor fantasies from Powell and Pressburger? Quoted directly in the script. The closing note of the film? Devoted to the promotion of another artist. There are a lot more.

I said before that despite going full on twee, there's something about Anderson's touch that works differently here, and I think the foregrounding of his influences has a major part to play. There is a generosity at hand that is quite touching to behold. A generosity that Anderson's star-filled cast and crew offer him, and that he in turn offers to his influences. For all its incomparable technical finesse (and believe me, it is fucking beautiful to look at) it never becomes a paean to Wes Anderson's unique talent.

Rather, The Grand Budapest Hotel is a film about listening. About learning, about paying attention to whom and what came before, about getting lost in stories and getting lost in art. I invite you, when it comes out, to get lost in it yourselves.

Review originally published during the Berlinale in February 2014. The film opens in select theaters in the U.S. on Friday, March 7 before expanding nationwide in the coming weeks. Visit the official site for more information.