Rotterdam 2020 Review: MEANWHILE ON EARTH, Art and Rites of the Funeral Industry

Carl Olsson's spellbinding documentary blends the banal, the comic and the pragmatic. 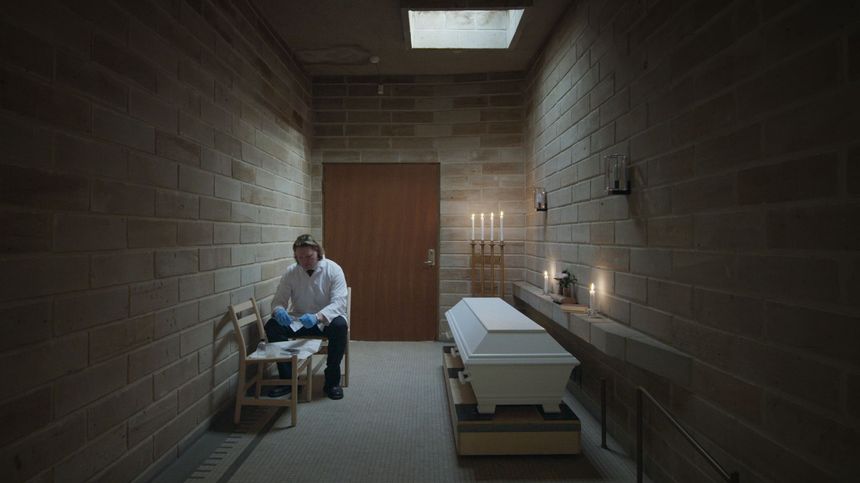 Meanwhile on Earth is a perfectly satirical title for a documentary exposing the practicalities of the funeral industry in Sweden, though it can be accepted as a standard in the majority of the occidental world.

Yet, Carl Olsson, the young Danish director working in Sweden, does not milk the material with the cynicism the topic baits, especially the intersection of capitalism and existentialism that Meanwhile on Earth partially touches; from afar, it appears to be, basically, a Disneyland for dark humor. Comic jabs there are, yet Olsson takes a sober and distanced stand with a certain delicacy approaching the rites of the last goodbye.

Olsson's sophomore docu-pic is a behind-the-scenes exposé, minus the sensationalism and spectacularity usually associated with the process of revealing something controversial or shocking. Really, there is nothing shocking or controversial about it; the procedures are familiar to anyone visiting a funeral. 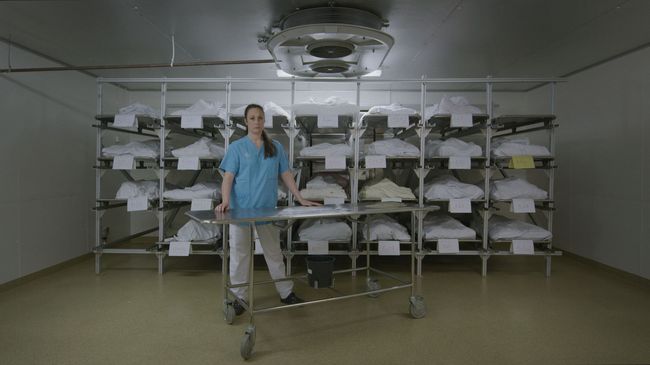 Quite the opposite, Meanwhile on Earth is pretty sanitized and sterile regarding the biology of human demise -- some scenes unfold in the pathology department, though no liquids appear on-screen and nothing merely abject -- as the director focuses on the practicalities of carrying out a funeral.

Meanwhile on Earth is basically a highly aestheticized corporate video, or a kind of tutorial, on standardization and formalization of processes and operations in the Western canon of obsequies' conventions. Even so, the docu-pic touches upon bigger themes than just capturing the production line of burials.

The topic of death is still fairly taboo in current Western society. Death is a big moment in everybody's life and a funeral offers a pseudo-theatrical spectacle to deal with that moment, engineered for survivors channeling ceremonial dignity, even though the last years before the demise are in many cases quite undignified (think Ulrich Seidl's geriatry scenes in Import/Export). 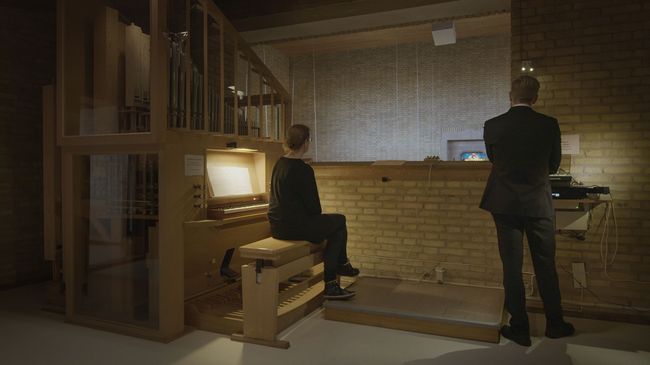 Meanwhile on Earth depicts the other side of the carefully orchestrated spectacle. castrated of any pathos and sentimentality, dealing with the currencies of a funeral. Banality prevails, and it is the amusing kind of banality, in the face of such a grand theme.

Carl Olsson's methodology focuses on the technicalities and practicalities, keeping a strong emphasis on the human aspect, the human resources carrying out all those menial tasks behind the ceremony. Olsson passes all the stations of dea(d)th as a sort of funerary supply chain. Besides the banal, Olsson exposes the mundane and profane side of the ritualistic disposition of a body. Without desecrating or violating the decorum around a man's physical husk, there is actually no explicit shot of an actual corpse.

The manner Olsson chooses to approach the topic is not so banal: a series of snapshots with an almost photoshoot composition for a magazine's centerfold. Each of these stations of death carves out its proper autonomy in aesthetic terms. Each scene could have been printed out on a single large print and hung in a gallery. 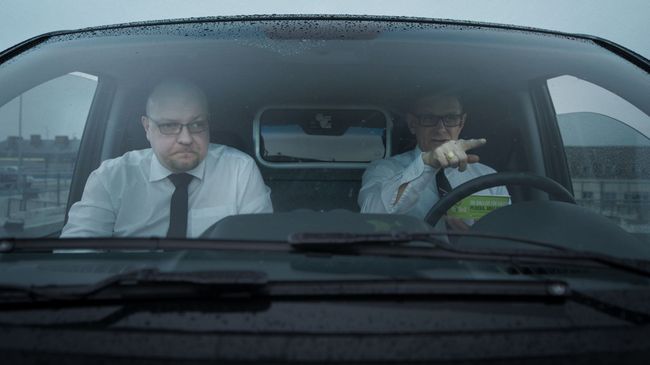 The symmetrical layout, the static precision it is shot with, and the intrinsic, almost subliminal comicality evoke the trademark infusion of Ulrich Seidl's poetics. The color palette and tonal rendering of the documentary, on the other hand, stems from Nordic aesthetics. Some scenes even feel like an homage to Roy Andersson.

The cross-over of Seidl and Andersson's formal and stylistic aspects forge an inspiring blend for Olsson's personal formalism. In this sense, Olsson over-aestheticizes on one hand the banality and profanity of death, while on the other hand the technicality and practicality of its ceremony.

Do you feel this content is inappropriate or infringes upon your rights? Click here to report it, or see our DMCA policy.
Carl OlssonIFFRMeanwhile on EarthRotterdam 2020Documentary