Review: PORTRAIT OF A LADY ON FIRE, Painted With a Queer Female Eye 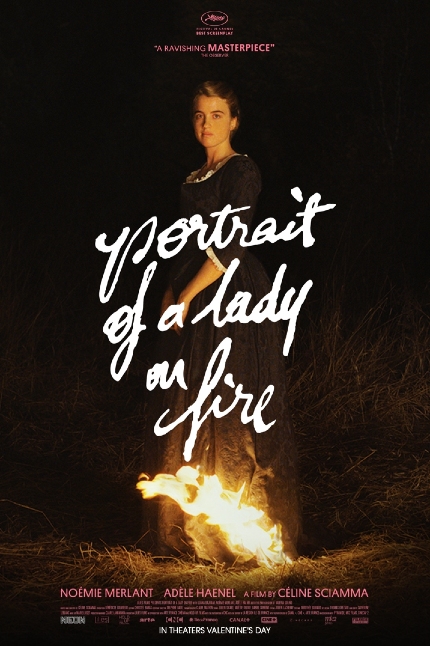 Rarely has there been a film title that was so apt in describing a film, and its maker. After contemporary social dramas on queerness and gender identity (Tomboy and Girlhood), writer/director Céline Sciamma's star continues to rise as she deftly handles a classical period film with her eye, again, to identity and presentation, at a time and in a class system where certain loves could definitely not speak their name.

In 18th century Brittany, Marianne (Noémie Merlant), an artist, makes most of her limited earnings from painting portraits of the wealthy aristocracy. Her services an engaged by an Italian noblewoman (Valeria Golino), who needs an official portrait of her daughter Héloise (Adèle Haenel) before the daughter's marriage. Except that it was originally Héloise's sister who was supposed to marry this much older stranger (purely for monetary and political reasons at the desire of her family), and her recent suicide has forced Héloise to take her place. Héloise is refusing the portrait (which means refusing the marriage), and so Marianne must keep her true work a secret, and instead pretend to be Héloise's companion, and draw only from memory.

As a woman not of the upper classes who either cannot or has no wish to marry, Marianne must earn her living or starve. Luckily she has a talent to sell. Even when she learns she must secretly watch her subject, she rises to the challenge. But watching a moving object, one that walks by the sea, runs across fields, indeed, rarely remains still as if she is a wild animal waiting to be caught. Héloise, in turn, watches the woman watching her, finding a portrait of her own to paint in her mind. These portraits become richer as the two women become closer, until their passion ignites, and their mutual portraits become a fire for each other.

This is an isolated world they occupy, if not at the moment lonely. Sciamma and cinematographer Claire Mathom present a classical styled visuals, imitating period dramas, and then turning those tables to show these women's passion, not only for each other, but for supporting each other as women whose circumstances overrule their desires. The minimal score keeps us in the realm of what these women experience: we see what they see (mainly each other), and hear what they hear (each other's voices, in love and pain). Again, this is the portrait being painted for us of these ladies, a term used both in the formal sense (given Héloise's status), the literal sense (these are women), and to emphasize that they are indeed together as ladies.

This is a world in which men only exist on the sidelines, and as shadowy figures whose power still exists, but whom, at least for a time, women can ignore. Héloise and Marianne also assist with the housemaid, whose unwanted pregnancy they find help with; indeed, they find more in common with working women who can be more open in their bonds with other women. This essential fire, maintained by women through domestic duty, artistic drive, or passionate love, is seen through the various portraits painted by the camera, and by the characters towards each other.

And Sciamma keeps a decidedly queer female eye on Héloise and Marianne's love and lovemaking (including a very sensuous moment with body hair that would have never been done by a male director). There is no doubt or artifice between them; they know that must be reserved for the outside world, in the form of Héloise's marriage portrait, as beautiful as it will be mysterious, its hidden messages only for the lovers.

The end of their story is known from the beginning, but Sciamma infuses it with such beauty and sadness that our hearts break with theirs as we watch them part ways. Portrait of a Lady on Fire is about portraits and the secrets they hide, those hidden in plain sight, only accessible to those who follow the clues.

Do you feel this content is inappropriate or infringes upon your rights? Click here to report it, or see our DMCA policy.
Adèle HaenelCéline SciammaFranceLuàna BajramiNoémie Merlant