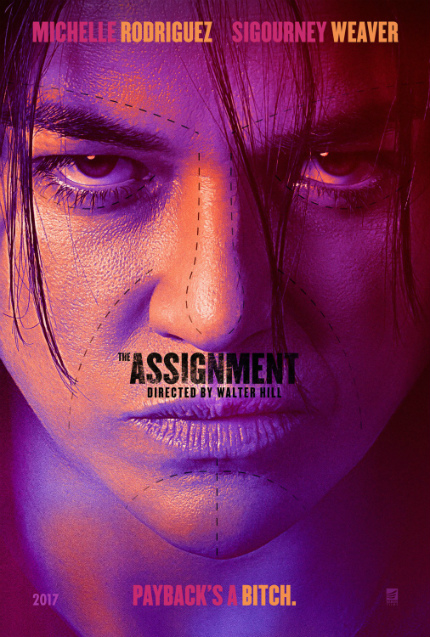 Impeccably made and persuasively acted, The Assignment is a thriller that's a throwback to director Walter Hill's prime period in the late 70s and 80s. It never throws off the stink of its odious premise, but it's so otherwise entertaining that it makes for a discomfiting watch.

The outlandish premise, which understandably drew condemnation and scorn when taken out of context, appears to be that the greatest punishment that a man can ever receive is to be transformed into a woman. It's the kind of idea that two men might cook up while drunk in a bar late at night: 'Hey, you know what would be worse than death?'

In context, however, within the confines of the film's story and its characterizations, it becomes apparent -- eventually -- that the "punishment" is more a reflection of a certain villain's extremely twisted, comic book perspective. Because the entire film reflects the same skewed, possibly offensive, perspective, some viewers may be able to swallow their objections and accept The Assignment on its own terms.

It's meant to be provocative and it certainly delivers on that intention.

Journalist Denis Hamill wrote the first draft of the original screenplay (then titled Tomboy) in 1978, which is the same year that Walter Hill's superb, moody action-noir The Driver was released. Hill told Rolling Stone that he optioned it about 10-12 years after he first read it but couldn't make it work. Some 15 years later, he read the script again and figured out how to do it, influenced by a graphic novel that he'd recently written.

Back in 1979, Hill's The Warriors hit hard during its theatrical release, igniting its own controversies for its depiction of colorful gangs of warriors seeking vengeance in New York City. Hill's original intention was to include transitional "panels," comic-book style, but that didn't happen, though the framing devices were finally included in "The Ultimate Director's Cut" on home video a few years ago.

The transitional, comic-book panels are a minor but notable feature of The Assignment, which reinforces a graphic-novel style with its bold visual scheme, emphasizing darker-toned primary colors. That extends to the script. The dialogue is snappy and pulpy; it's easy to imagine it written in comic-book bubble style, all in uppercase with a plethora of exclamation marks.

Michelle Rodriguez stars as professional hitman Frank Kitchen, who is a lethal weapon operating in the shadier confines of San Francisco's seedier side. One night, Frank is taken by force and knocked out. Frank wakes up in the morning to discover that gender reassignment surgery has been performed and "he" is now "she." Frank is none too happy about this development and vows revenge. 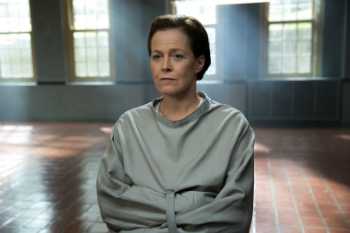 The performances carry an exaggerated, tough-guy edge; even the prison psychiatrist, Dr. Ralph Galen, is embodied by Tony Shalhoub with faux menace, standing at the edge of mockery of anything "Doctor" Jane (Sigourney Weaver) says. (It's similar to the way Tommy Lee Jones refers to Doctor Richard Kimball in The Fugitive.) It's only in Shalhoub's superb delivery that the faint sarcasm and disbelief of his character truly comes alive.

Again returning to the late 70s, Hill, David Giler and Gordon Carroll came on board Alien as producers; Hill and Giler revised the script by Ronald Shusett and Dan O'Bannon, though ultimately without screen credit. The film jump-started Sigourney Weaver's career, and she quickly began nabbing substantial roles in the likes of Eyewitness and The Year of Living Dangerously.

It was widely reported that Alien was written without indicating the sex of the characters, and so Ripley is a far tougher character than women in genre films usually had the opportunity to play in the 1970s; Weaver made the most of Ripley's strong personality and made her, in essence, immortal.

Thus, it's quite wonderful to see Weaver making the most of her "evil doctor" persona; she plays it broadly yet with great authority. She spends much of her screentime in a straitjacket, with a relative minimum of physical dexterity allowed to her character. But she's a roaring presence, reeling off psychiatric jargon and medical terminology and intellectual posturing, all while adapting a superior tone of voice that exhibits her contempt for those around here.

Watching Rodriguez as a man, it's impossible to shake off the knowledge that she's a woman playing a man, no matter the beard, body hair, and prosthetic penis. Her movements are exaggeratedly in the style of a stereotypical man, to the point that it's about equivalent to how Jack Lemmon and Tony Curtis pretended to be women in Some Like It Hot.

But there's also a sleek elegance to the character's movements, whether a man or a woman, a surety in her practiced skill as an assassin, the way she moves around rooms, always looking for the best angle and never hesitating to pull the trigger first without ever asking questions.

Rodriguez started her screen career as a boxer in Karyn Kusama's Girlfight and she's been battling sexual stereotypes ever since. She quickly landed a key role in The Fast and the Furious, and the franchise has turned into a good showcase for her talents over the years, but I think it's safe to say she's never had an opportunity like this before. And she nails it, bringing a convincing confusion to Frank, who may not be that bright, but has the smarts to know what needs to be done.

The film reminded me of Hill's 48 Hrs. (1982), which was also set in San Francisco and also takes full advantage of neon lights and bruising action and dead-aim shooters. Like Alien did for Sigourney Weaver, 48 Hrs. made a bona fide star out of Eddie Murphy by showcasing his strengths. Rodriguez deserves a career boost because of her performance here, but it doesn't look like that's going to happen.

The Assignment trades in outright hostility rather than hard-nosed humor, but it shares a sense of bravado with 48 Hrs. that is reflective of Walter Hill's best films, which practically shout out what should be his enduring philosophy: 'This probably isn't a good idea, but I'm going to do it anyway, because I believe I can make an entertaining picture out of it."

The film, also known as Revenger and (Re) Assignment, is now available on a variety of home video platforms. Critical Distance is a regular feature.

Do you feel this content is inappropriate or infringes upon your rights? Click here to report it, or see our DMCA policy.
Denis HamillMichelle RodriguezSigourney WeaverTony ShalhoubWalter Hill