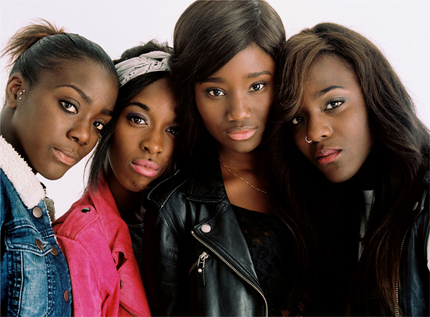 Girlhood (Bande des Filles) quite literally kicks off to a running start.

In the first second in the very first shot, a rush of decked-out football players come hurtling head-on directly at the camera. Backed by thumping, synth-heavy electropop, we follow them in slow-motion as they blitz, tackle and score, pumping themselves and the audience up with this high energy overture. It ends when the gridiron gladiators leave their helmets and padding on the field to reveal... long hair and soft skin. These are all teenage girls. Cut to title card: Girlhood.

The opening nimbly sets up this remarkable film's intentions. For the two hours that follow, it will continually challenge what's expected of its characters, both by their peers and by us, the viewers. The gender switch is not even the only counter-intuitive element.

The football is of the American variety, though it is played in a suburb just outside of Paris. If the image of swaggering sports heroes was not immediately conjured when considering teenage girls in France, you're not the only one. As the all-girl team makes their way back, their boisterous energy dims noticeably upon coming into contact with the neighborhood boys. By the time they reach home, all are soft and sweet. Bravado is fine just among us girls; in public there's an expectation to be demure.

Ah, yet another constriction. The team splinters girl by girl, and eventually we're following only one: Marieme (Karidja Toure). We'll stay with her the rest of this film, exploring the many she encounters navigating her world. The story is roughly divided into four chapters, each separated by an indeterminate period of time. In each, Marieme is presented with a constriction or an expectation or a decree, and will rail against it, respond to it by changing the terms and transforming herself.

One of the very first ones can reasonably be seen as girlhood's end. Marieme is told, due to her poor grades, that she will not be allowed to enter high school. France is a top-down bureaucracy; there's no contesting the decision. She should take up vocational school and accept being marginal, move towards the future decided for her. The girl is shy but self-confident and not willing to lay down. Not going to find success as Marieme? Fine. She leaves school, joins a girl gang, becomes Vic (short for Victory). It may not be the quote unquote best decision, but it is her decision. 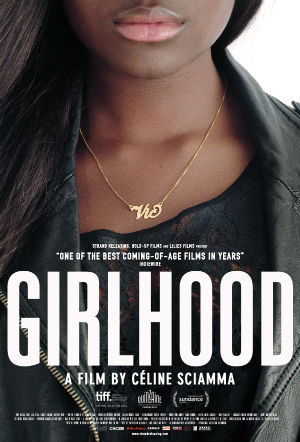 The film is very effective in contextualizing the decisions of its characters within their social setting. Vic is from the underprivileged suburbs, the slums basically, and as such the films shares many similarities with those 'hood movies from the 1990s, the ones both French (La Haine) and American (Boyz N The Hood). But the film has a more nuanced take than its predecessors. Being in a kind of gang is not some all or nothing proposition. The film does not exist on some Manichean plain, where there's the right way (Stay in School, kids!) and the wrong way (Gangs = Violent death) and not much air between.

Vic and friends Lady, Fily and Adiatou, do shoplift, do get into fights, but the film never paints them as bad eggs. They're girls, making due with what was given. They assume an air of outer aggression, but it's just as much a product of social conditioning as the wilting flower routine at the film's beginning. Behind closed doors, it's all about eating candy and singing Rihanna.

Director Celine Sciamma burst onto the scene in 2007 with her debut Water Lilies, and followed it up with Tomboy four years later. Both films dealt with gender, social conditions and the tricky relationships between growing girls, which makes Girlhood a fitting cap to that informal trilogy.

As a director, I think the sky's the limit for her. She depicts social realism with a formally interesting edge. She knows that an expressive camera and an agile soundtrack are not the enemies of deeper truth (after a week of handheld cameras and natural soundscapes, for which I am deeply grateful). She's smart enough to know that no transformation, no social reconfiguration will ever solve Marieme/Vic's problems.

But she's generous enough to leave us with a powerful last shot, assuring us that whatever complications arise, Marieme has the strength to push forward and push through. We may leave Marieme/Vic at the end of the film, but I can't wait to see what Sciamma does next.

Review originally published during the Cannes Film Festival in May 2014. The film opens in select theaters on Friday, January 30. Visit Strand Releasing for more information.