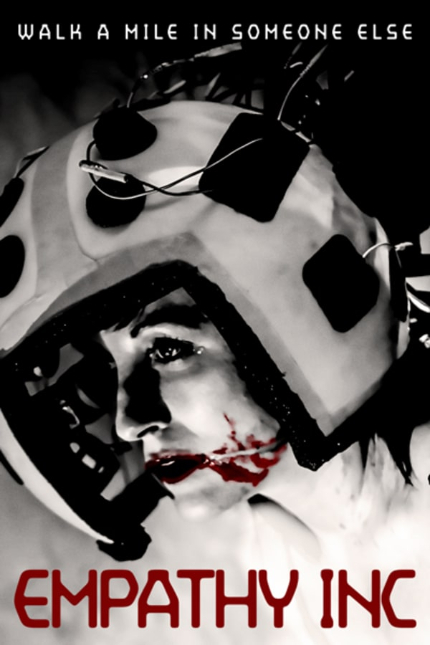 Can you ever have too much fellow feeling for somebody else?

We've been covering the visually striking Empathy Inc. since it debuted at Cinepolcaypse 2018. Following its festival run, the film hit theaters and VOD last fall, and has now made its debut on the Shudder streaming service.

Presented in black and white, the film utilizes a small number of locations to maximum effect. Directed by Yedidya Gorsetman from an original screenplay by Mark Leidner, the drama begins on a low-key note.

After his high-profile startup company crashes and burns in Silicon Valley, venture capitalist Joel (Zack Robidas) crawls back to the New York area with his still-supportive wife Jessica (Kathy Searle), moving in with her parents, Ward (Fenton Lawless) and Vicky (Charmaine Reedy), as he licks his wounds and resents his in-laws for their thinly-disguised disapproval.

Quickly dispatching himself to a neighborhood bar for a little quiet time, yet still fraught with anxiety, Joel meets old friend Nicholaus (Eric Berryman) and is soon hooked by the latter's sales pitch for his fledgling company. Joel becomes fully convinced after he meets Nicholas' tech partner, Lester (Jay Klaitz), and tests the concept, a revolutionary Virtual Reality (VR) service that supposedly makes its users more empathetic to other people.

Soon, Joel is talking to his father-in-law about investing his retirement savings in the company. Surely, disaster will follow!

And, yes, the slow-buildup gradually leads to things going wrong -- or, "not as expected/hoped," in startup talk -- and the pace of the film picks up. Clever twists and diabolical turns also figure into the story, which becomes more gripping as it goes.

The lead performances bolster the story in ways that I could not anticipate, and to surprisingly good effect. As certain things are revealed -- no spoilers! -- the depth of those performances kept me glued to see what might happen to those characters, even if they are not all terribly likable on the face of it.

Modest as it is, Empathy Inc. becomes increasingly rewarding, embracing certain, more obvious cliches as it coils more tightly and stretches forward toward a fateful finish.

Do you feel this content is inappropriate or infringes upon your rights? Click here to report it, or see our DMCA policy.
Eric Berryman. Yediya GorsetmanJay KlaitzKathy SearleShudderUSZack Robidas