Review: PARASITE, Complex and Seamless, A Triumph Through and Through 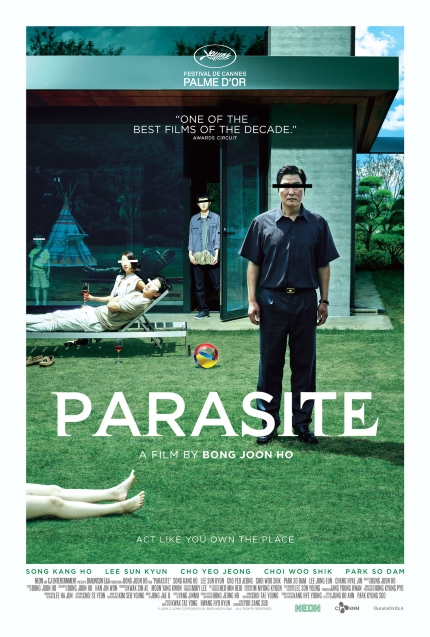 For every Host, there must be a Parasite.

Since his debut Barking Dogs Never Bite 19 years ago, Bong Joon-ho's works have always resisted easy classification. Within stories that stray from one genre to the next, surprising things tend to happen, sometimes horrific, occasionally even fantastic. Disparate elements abound, but a rigid degree of control and an ever-present sense of humor have given us something approaching a stylistic aesthetic we have come to expect from him.

Similarly, the thematic array of his work, not only from film to film, but even from scene to scene, moment to moment, is equally vast and unpredictable. Yet here too we find a common thread, never more richly explored than in his latest work, Parasite. Social inequality forms the pulsating heart of Bong's blindsiding Palme d'Or winner, which is sure to rank among the director's most impressive, and certainly darkest, films to date.

Bong teams up for the fourth time with the great Song Kang-ho, who portrays Ki-taek, the genial patriarch in the poor Kim family. When his son, Ki-woo (Choi Woo-shik), lands the job of English tutor for the daughter of wealthy CEO Park (Lee Sun-kyun) and his wife (Cho Yeo-jeong), the two families collide in the most unusual ways imaginable.

This devastating social parable intersects these two wildly different families, one eeking out a lowly existence in a dank basement apartment, the other living it large in a designer home high in the hills of Seoul. The film opens with a street view, as seen from the Kim family's grimy, underground dwelling, and cranes down into their subterranean hovel.

The WiFi signal the Kims have been mooching has vanished, prompting son and daughter (Park So-dam) to pace around their cramped abode, phones held up to the ceiling, while Ki-taek and his wife (Chang Hyae-jin) direct them from the floor. Eventually they find a signal, but only while crouching beside the toilet bowl, curiously perched atop a small flight of tiled stairs in their yellowing bathroom. Beyond introducing the wonderful interplay of this resourceful and curiously jaunty family, this bold opening sequence playfully presents symbols and thematic devices that will recur throughout Bong's film.

While the Kim's home sits half-buried at the dead end of a twisted alley, the Park residence clings to a hillside, nestled within its own protected oasis at the apex of a sleekly paved road. The lone light source for the Kims, a rectangular window no more than a foot high, is routinely urinated on by drunken middle-aged men who've reached the end of the road. Meanwhile, the Parks sit in their living room, looking out through a similarly-shaped but infinitely larger window, into a small landscaped forest, hidden from the rest of the world.

These windows highlight the different circumstances of the protagonists, but also the vastly different ways they view the world. While most tales exploring social divides might demonize the greed of the haves or the corrupting ambitions of the have nots, Bong's approach is far more empathetic. He shows the quick-witted Kims as survivors with a loose moral code, while the Parks are generally decent people, who care for their children and have grown somewhat aloof within the trappings of their social class.

If there is a villain in Parasite, it's the top-down social structure in which these characters exist, symbolized by an array of staircases and various props, such as a special stone given to the Kims, said to bring its owner wealth and prosperity. Though the Kims are all unemployed, they seem comfortable with their station, and indeed any other, as they adapt easily to whatever situation they find themselves in. The unquenchably optimistic Ki-woo constantly marvels at objects and situations, calling them 'metaphorical', including this rock, but his interpretations, such as his evaluation of a piece of art drawn by the Parks' young son, sometimes prove false. Throughout the film, things are rarely as they seem.

Though Parasite is very much an ensemble piece, and features uniformly impeccable performances, a pair of roles do stand out. Unsurprisingly, Song Kang-ho shines as Ki-taek, employing his brilliant comic timing and intonation to tease out side-splitting laughs. His delivery swerves up and down, halts and flows, even as his delivery rarely edges above a breathless whisper. Then we have Lee Jung-eun, a bit part player from many Korean films (including Bong's Mother and Okja), who is a revelation here, masterfully cool and composed as the prim Park housekeeper.

Bong's complex, seamless script, the less known about prior to viewing the better, is brought to life by a stellar production crew, which includes the pristine photography of his Mother and Snowpiercer cinematographer Hong Kyung-pyo, and the contrasting and richly symbolic spaces designed by Lee Ha-jun (Okja). Where Parasite lands within Bong's filmography will depend on the viewer, but there's no doubt that his return to Korean filmmaking after a decade away is a triumphant one.

Review originally published during the film's South Korean theatrical release in May 2019. Paraside will open in select U.S. theaters on Friday, October 11, 2019, via Neon Releasing and will expand in the coming weeks. It will also be opening in more territories over the next few months.

Do you feel this content is inappropriate or infringes upon your rights? Click here to report it, or see our DMCA policy.
Bong Joon-hoPark So-damSong Kang-hoSouth KoreaYeo-jeong Jo