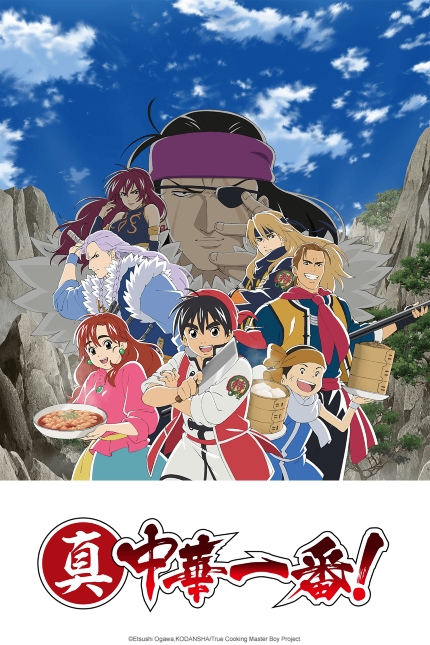 A cooking-themed show that takes a more measured approach to its subject, at least in its very enjoyable first episode, makes me eager to see more.

Set in 19th century China, we are introduced to three very hungry characters. Mao is the evident leader of the small group, which includes his friends Shirou and Meili. They encounter a young property owner who kindly offers them hospitality. It seems that her brother recently died; he harbored a dream of raising rare black chickens as stock for their restaurant, which never got off the ground and became a failure, this in a town with many successful, acclaimed restaurants.

Mao, who appears to be a budding cook, strikes on an idea for a meal so they can enter the annual cooking competition. The young owner agrees, and Mao's full identity is revealed, along with a sterling pot of rice.

What the show shares with Food Wars! is the ecstatic reaction to good cooking, though it doesn't follow the fan-service approach. The backgrounds are more detailed, the pace is more deliberate, and it becomes clear that the motivations of the characters will be revealed in due course. There is still plenty to stir intrigue and interest, though.

Summing up: The show is very much 'my cup of tea.' More, please!

Food Wars! The Fourth Plate
Now streaming on Crunchyroll and VRV. New simulcast episodes will be available on Friday. All three previous seasons are also available to stream.

Now in its fourth season, Food Wars! The Fourth Plate is fast, frenzied, frenetic and filled with fan-service.

Before watching the first episode of the new season, I was not familiar with the show, so I back-tracked and watched the first episode from the first season, which introduces Soma Yukihira, a teen who is about to graduate from his middle school. His father owns a small, beloved restaurant, and Soma has grown up with the goal of replacing his father as chefs. He's already developed his skills and daring nicely, when his father shocks him by abruptly selling the restaurant so he can go to Europe and cook there, enrolling young Soma in Japan's top culinary school as a parting gift.

The official synopsis picks up the series from there: While at the school, Soma encountered various other chefs and continued to grow, but things changed drastically as soon as Nakiri Azami took over as the school's new director. He establishes Central, and the students become unable to cook freely anymore. Soma and his friends decide to fight back against how Central is handling things, which turns them into rebels.

And now, the time for their 2nd-year exams have arrived. Despite being put into one unfair situation after another, Soma and his friends keep pushing through, but Central also refuses to stop. Some of Soma's friends end up expelled from the school. To try to turn things around, Soma and his friends challenge the new Totsuki Elite Ten to a Group Shokugeki.

Soma's team have a huge victory in the first match, but things have only just begun. Enter the 2nd bout! Will Soma and his team be able to take the Elite Ten's spots and save their friends?

The new season kicks off in full force, and I suspect I will need to catch up with more episodes to enjoy the flavor of the show. It is a definite pick-me-up, however, and fits in well with Crunchyroll's Friday lineup.

Summing up: Chances are, you already know if this is your kind of dish.

Do you feel this content is inappropriate or infringes upon your rights? Click here to report it, or see our DMCA policy.
animeCrunchyrollFood WarsJapanStreamingTrue Cooking Master Boy