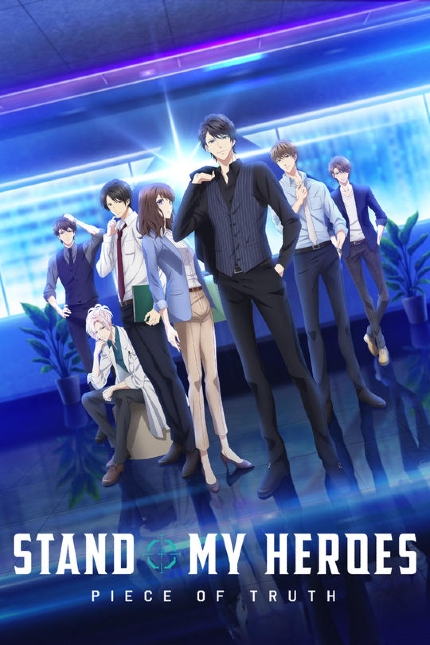 Learning about anime can be fun ... and awfully confusing.

Stand My Heroes: Piece of Truth
Now simulcast streaming weekly (every Monday in the U.S.) on Funimation and Hulu.

The most immediately appealing of a trio of adaptations, Stand My Heroes could be programmed easily alongside Babylon and Special 7 (as covered here), following a new recruit assigned to a special unit of the police force.

Izumi Rei is not warmly welcomed to the newly-created unit, which is tasked with investigating major narcotics offenses. She has a unique talent, however: she is not affected in any way by drugs. They simply have no effect upon her.

This would seem to make her ideal for undercover work, but the more experienced men in the unit begrudge her very presence (and there are other reasons for that as well). To start, though, she is assigned as a scout for the unit, meant to recruit new agents and investigators, as well as informants.

The first two episodes have featured traditional, very masculine teamwork among the new unit members -- i.e., much bantering and insulting -- but Rei quickly demonstrates her willingness to do whatever it takes to prove that she belongs. The show is based on a mobile game, which surprised me, only because it feels like a fully fleshed-out concept, beyond the action, which is already plentiful.

Summing up: So far, a good hook, decent action, and the promise of more secrets to be unveiled merit further viewing.

As a long-time fan of science fiction, I was immediately intrigued by the concept.

Two new recruits meet on board a spaceship hurtling toward a new planet, whereupon they disembark and barely survive an onslaught of bug-creatures, which kill all the other members of their new (and equally green) team. From there ... they continue killing creatures and try to survive?

Frankly, I am not sure. As the title indicates, this is a sequel of sorts to an adaptation of an online game, and it feels very much like a game: solely focused on the action. I haven't caught up yet with the first anime adaptation, which was released in 2016, and perhaps it delves further into the characters.

The action is fine, but in the second episode, more characters were introduced, and I had trouble keeping track of them. If the show will be mostly consumed with action scenes, that's OK, but I wish I had some idea where the narrative might be going, and a better definition of the characters themselves. Maybe in future episodes?

Summing up: I'm 50/50, though willing to give it a further shot, in view of the rather furious action.

Z/X Code Reunion
Now simulcast streaming weekly (every Tuesday in the U.S.) on HiDive and VRV.

The basic mechanics of this story are appealing.

Young Azumi enrolls at a new school academy that teams each student and their Z/X partner. Azumi has just become acquainted with her Z/X partner ... and yes, I was completely bewildered by what was going on, and then I realized that I really need to research shows before I begin watching them. Originally created and released as a collectible card game in 2013, which was then adapted into an anime, Z/X Ignition, in 2014, the current show is a sequel to that, and is based on a manga series.

In the near future, five different races from different planets have invaded Earth with the intention of wiping out every other race in order to ensure their own survival. A peace treaty has somehow been established, however, and one super-powered race in particular, known as Z/X, decides to partner with humans.

Into this environment, Azumi is enrolled at a top-flight academy and realizes that her new Z/X partner has amazing powers. She is also taller, much stronger, and, well, much more adult, leaving young Azume a bit bewildered herself at the turn of events.

I'm still trying to get a bead on the series. The default mode is fan-service, especially in its distorted views of female anatomy, which I suppose is intended to be accepted because ... aliens? That continues to creep into far too many series for my personal comfort. If the show focuses more on the potentials of the story and the characters, it could blossom into something special.

Summing up: The idea of aliens protecting their humans, and the general sci-fi premise, will keep me on the line, for the next episode or two, at least.