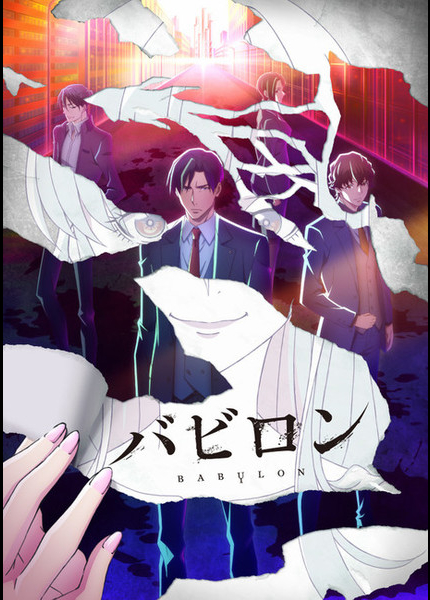 Let's call this our catch-up edition for animation, as the Fall 2019 anime simulcast season launches in full earnest.

I'm glad the first three episodes of this adaptation have been made available all at once, because ... wow.

Based on a novel series, written by Mado Nozaki and illustrated by Zain, that was first published in 2015, Babylon follows public prosecutor, Seizaki Zen (voiced by Nakamura Yuichi, Fruits Basket) who investigates a pharmaceutical company. The company has made drugs available that are supposedly for insomnia, but the investigation reveals that the tests were falsified and the drugs may be far more dangerous than initially suspected.

The story is set in Shiniki, a "newly-created district west of Tokyo," per the official synopsis, and Zen believes he should be prosecuting organized crime cases in the district, to root out evil before he has a chance to flourish. Very quickly, however, he comes to realize that politics are playing a major role in the new district.

The first mayoral campaign is underway, and the forces behind two candidates, in particular, are very powerful indeed. As Zen investigates, he comes up against that power, which is demonstrated in the conclusion of the third episode, as we learn who won the mayoral election, the evil lurking behind the new 'wonder drug,' and the possible identity of a woman who is evidently playing a key role in what looks very much like a sinister conspiracy.

Animated by Revoroot and produced by Twin Engine (Vinland Saga), the series looks properly dark in its atmosphere and character designs (by Goto Keisuke), and it moves at a good clip (directed by Suzuki Kiyotaka).

Summing up: I only wish I knew when more episodes will be coming.

Special 7: Special Crime Investigation Unit
Now streaming via simulcast on Sundays via Funimation and on Hulu.

In a world where elves, dwarves and vampires are open and acknowledged citizens, newly-graduated police detective Nanatsuki Seiji (voiced by Shimono Hiro) gets immediately involved in a bank robbery gone wrong -- he's a customer -- and soon finds himself assigned to Special 7, a unit that includes an elf, a dwarf, a vampire, and a seasoned human cop, voiced by Tsuda Kenjiro (last season's Cop Craft).

The original series, written by Higashide Yuichiro and directed by Kosaka Harme, is lively and features an abundance of interplay between the unit's officers, which also suggests an abundance of story possibilities. The overall tone, though, appears to be that of a serious police drama with plenty of action, which is right up my alley.

Summing up: Two episodes down, and Special 7 has been added to my watchlist.

Genndy Tartakovsky's Primal
First episode is now available to watch without cost on Adult Swim. Four more episodes are available for cable subscribers, while future episodes will air on Saturdays.

A human known as Spear and a T-Rex known as Fang team up, fighting for survival against other cavemen and dinosaurs. That's it!

Except that the two creatures have a very special relationship, and the action is nearly continuous and extremely brutal. The violence is quite explicit; we're talking intestines spilling out of bodies, limbs getting ripped off, and blood splashing everywhere.

Frankly, it's a bit too extreme for my more delicate sensibilities nowadays, but the animation is bold and striking. It's also hard not to admire the decision to restrict the dialogue to groans, moans, and shrieks. Overall, it's a very boldly-animated and exciting show, if you have a taste and/or tolerance for the violence.

Also extremely violent -- not for kids! -- is an English-language animated series that is set in Mexico.

Created by Brad Graeber and Alvaro Rodrigues, and made in collaboration with Viz Media, the 8-episode first season revolves around a small town that is ruled by a drug overlord known as El Balde (voiced with great menace by Danny Trejo). Three orphans (voiced by Aislinn Derbez and Jonny Cruz; the third is silent) who were raised by a martial arts master must forge a new path in life after El Balde begins flexing his outsized, artificially-inflated muscles over the formerly peaceful little town.

Untold numbers of people are slaughtered in the initial episodes, which also introduce Brister, a cop from the US (voiced by Mike Colter), and the town's first female sheriff, Garcia (voiced by Angelica Vale). From the politically-incorrect dialogue and the artificial aging introduced in the animation, it appears that the series is set in the 1970s.

What's most refreshing is the mixture of diverse characters among the good and evil sides in the battle for souls. If you're OK with the R-rated (or, in TV terms, TV-MA) level of profanity and explicit animated violence, it's quick-witted and filled with action scenes that tend to be eye-popping, in both the literal and figurative senses of that description.

Do you feel this content is inappropriate or infringes upon your rights? Click here to report it, or see our DMCA policy.
animationanimeBabylonGenndy TartakovskyJapanPrimalSeis ManosSpecial 7US