Fantastic Fest 2016 Review: DOWN UNDER, Not a Land of Racial Wonder, But Maybe It Should Be 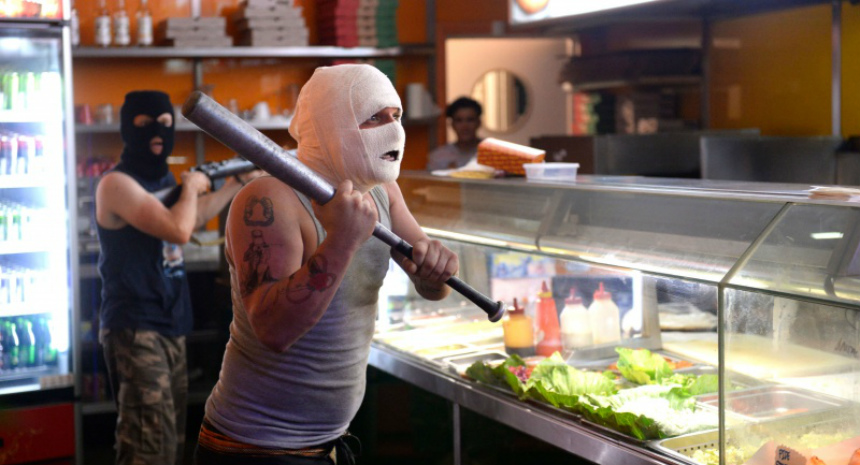 The day after massive race riots in Sydney, Australia some 10 years ago, two carloads of impassioned and perplexed characters are moved to respond, calling upon deeply felt emotions that surge out of their bodies like cascading waves. What could possibly go wrong?

Written and directed by Abraham Forsyth, Down Under perfectly captures the foolish pride and misplaced anger of racism. Having heard that "Lebs" and "Wogs" plan to storm Sydney beaches in protest of the race riots the day before that primarily victimized immigrants, the very white Jason (Damon Herriman, TV's Justified) gathers his mates to defend their land. First, though, he needs a car.

On the other side of the racial divide, Nick (Rahel Romahn) feels properly steamed and is ready to start cracking some white heads. He justifies it as a necessary thing; he reasons that if they don't defend themselves and assert their rights, they will never regain their moral high ground. He wants to team with his best mate Hassim (Lincoln Younes), but Hassim just wants to study and carry on with his life. It's only after he thinks about his younger brother -- not yet accounted for after the previous day's madness -- that he decides to join Nick. They end up with their mate Ibrahim (Michael Denkha) and Hassim's uncle, a devout Muslim who is outraged when he hears about what happened.

Simultaneously, Jason is struggling to convince Shit-Stick (Alexander England) to join him in their battle for white supremacy -- although those words are never used -- or at least to give him the keys to his car. Shit-Stick is a hardcore stoner who is looking forward to spending time with his cousin, a friendly young man with Down syndrome, and watching the Lord of the Rings trilogy. As Jason is trying to put his troops together, he's also fielding phone calls from his pregnant girlfriend; they have two other kids and she's become quite demanding in what she needs from him now!

Eventually, of course, we know these two carloads will collide, but their journeys to that collision point are filled with episodic incidents that shed light on the characters and also how unprepared they all are for dealing successfully with little challenges in life, much less something major with no precedent, such as the race riots. They are old enough to think they know better than their peers, or even each other, yet not sufficiently mature to realize how little they actually know about life, much less their own individual identities, and how they will respond when under severe pressure.

Writer/director Forsyth keeps pushing the narrative forward, filling the frame with little details that are quite illuminating -- and very, very funny. Yet he's not solely concerned with ridiculing racism and the impulses that lead to it, but also in examining the results. The whiplash effect certainly comes into play; sometimes an incredibly funny, laugh out loud scene is followed immediately by one that is gravely serious.

The movie sucked the air out of my lungs, either from laughing at the absurdity of the characters or gasping at the violent actions that are motivated by their fury, sometimes within the same sequence. Down Under demands attention, not only because of its passionate views on the subject matter, but also because it's damn enjoyable to watch the characters try to think their way out of a paper bag of self-righteous indignity.

Down Under enjoyed its international premiere at Fantastic Fest. It screens again today.

Do you feel this content is inappropriate or infringes upon your rights? Click here to report it, or see our DMCA policy.
Abraham ForsytheAustraliaDamon HerrimanFantastic Fest 2016Rahel Romahn