Now Streaming: ELI, Who Is Forsaken 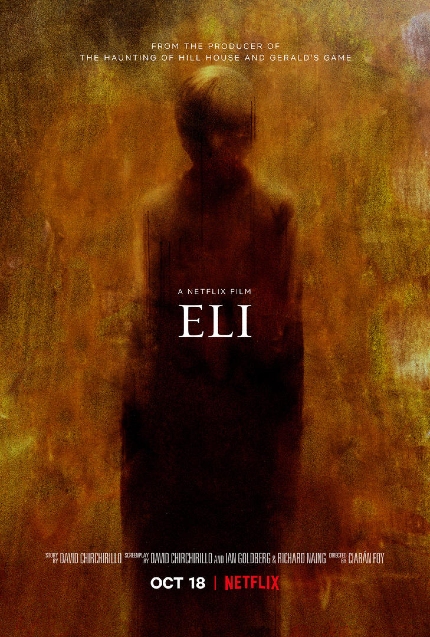 It's rare for me to see a film that I don't want to tell anyone about for fear of spoilers.

Young Eli, 11 years of age, feels like a forsaken child.

His mother Rose (Kelly Reilly) is a kind, loving and affectionate person; his father Paul (Max Martini) is more distant, a stiff sort of fellow. Both parents have the same goal, however: to help Eli find a cure for his auto-immune disorder, which restricts him from human contact and traps him within a protective bubble.

His order lies at the heart of why Eli feels forsaken. That, and probably the manner in which his father treats him. Paul is not exactly brusque, and he is considerate of his son, yet without the modern intimacy that might be expected.

In pursuit of a cure, Rose and Paul accompany Eli to an isolated facility where Dr. Horn (Lili Taylor) promises a solution to all their problems. The facility is housed within a grand mansion, which itself is situated on a huge property, remote from any contact or unwanted interference.

It's a perfect setup for a horror movie, especially in view of the slightly off-kilter lighting and slightly off-kilter production design, as captured by cinematographer Jeff Cutter and production designer Bill Boes, not to mention the slightly foreboding, swirling musical score composed by Bear McCreary. So when Eli catches sight of ghostly figures in the empty hallways of the mansion, the story's path forward appears set, especially when Dr. Horn reassures everyone that Eli's sightings are simply a side-effect of the experimental medication.

As well-orchestrated by director Ciarán Foy, based on an original screenplay credited to David Chirchirillo, Ian Goldberg and Richard Naing, the film proceeds to demonstrate vividly that some cliches, such are 'appearances can be deceiving,' deserve to be demolished, and those narrative turns do not twist as might be expected.

In his debut feature, Citadel (2012), Foy created a creepy atmosphere in which frightening real-life terrors could pop off the screen. His next horror feature, Sinister 2 (2015), followed the original visual template, to a degree, but also slanted into different geographic territory for Foy, with a wider variety of settings to unsettle.

Initially, Eli appears to be a carefully-composed mood piece about the crumbling boundaries between experimental medical treatments and unending nightmares. Blatant, irritating contrivances are eventually revealed to be something else entirely, and it all feels like a plot to throw any viewer off the track.

Like a jigsaw puzzle broken apart all at once, not all the pieces fit back together into a cohesive whole. At a certain point, however, I gave up trying to make it all fit, sat back, and enjoyed the remainder of the ride.

Summing up: Revel in the sheer audacity on display; the film is a rather clever and diabolical chiller.

Do you feel this content is inappropriate or infringes upon your rights? Click here to report it, or see our DMCA policy.
Charlie ShotwellCiarán FoyhorrorindieKelly ReillyLili TaylorMax MartiniNetflixUS