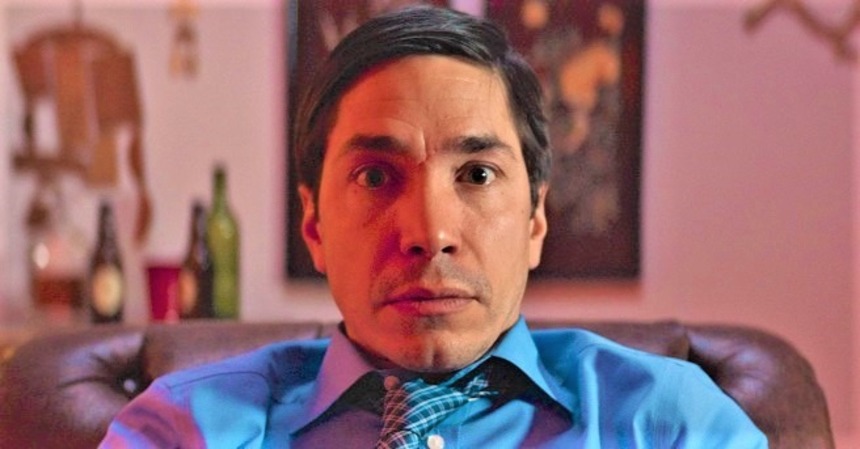 The Wave is the sort of movie people will encourage you to watch while high.

This is a bad idea. As movies featuring bad drug trips go, it ranks with the most jarring. But it also uses that premise to craft a very funny and insightful story, and it would be a shame if you missed any of it.

Justin Long plays Frank, a young man in desperate need of clarity about what an awful human being he is. While the way he finds it is largely the stuff of fiction, the movie does such a good job of setting up his character you'll be able to recognize people you know -- maybe even yourself.

He's a lawyer and he's just discovered a loophole that will prevent the company he works for from having to pay out on a huge life insurance policy, putting him one meeting upstairs away from a major promotion. Never mind that it's liable to ruin the lives of the family involved. Luckily for Frank help is on the way. A last-minute decision to surreptitiously celebrate with co-worker Jeff (Donald Faison) leads him to a series of poor life decisions that culminate in taking a designer drug that seems to actually alter space and time. In no time at all, his life is falling apart and he's racing to understand why.

Long is predictably perfect for the role of the would-be golden boy and he's supported by an able cast that includes Donald Faison as his bad influence work bestie and Sheila Vand as the girl of his literal dreams. Vand is luminous, every bit as scene-stealing in her impact as she was in A Girl Who Walks Home Alone At Night (2014). But the show is almost stolen by Tommy Flanagan and Ronnie Gene Blevins. Flanagan exudes a strong mystical presence as the purveyor of the drug that starts Frank on his journey. Blevins is, simply put, hilarious as a psychotic paranoid whose own drug dealing becomes the source of even deeper trouble for Frank.

The strong performances, sure pacing and visual flair are what carry the film, underlining what it has to say about self-reflection and becoming. In fact, viewers are liable to have so much fun watching Frank try to cope with the constant shifts in reality that the less surprising ending of the story will work just fine. To call The Wave frenetic, action-packed, might give readers the sense it exists simply to inspire genre thrills, but it sings with the desperation of Frank's character in-between moments of visual madness and hilarity.

It's worth noting that The Wave deals in known narrative quantities. It's liable to remind you of other movies despite an original visual approach. But it doesn't feel stolen, or ersatz in any way. It emanates a sincere desire to provoke thought about something universal and important. Hitting rock bottom, it says, isn't just for alcoholics and drug addicts. Hitting rock bottom can be about pride, wrong-headed ambition, letting go of bad relationships, or, even about understanding why doing the right thing matters so much.

The film enjoys its world premiere at Fantastic Fest.

Do you feel this content is inappropriate or infringes upon your rights? Click here to report it, or see our DMCA policy.
Fantastic Fest 2019Gille KlabinJustin LongUS