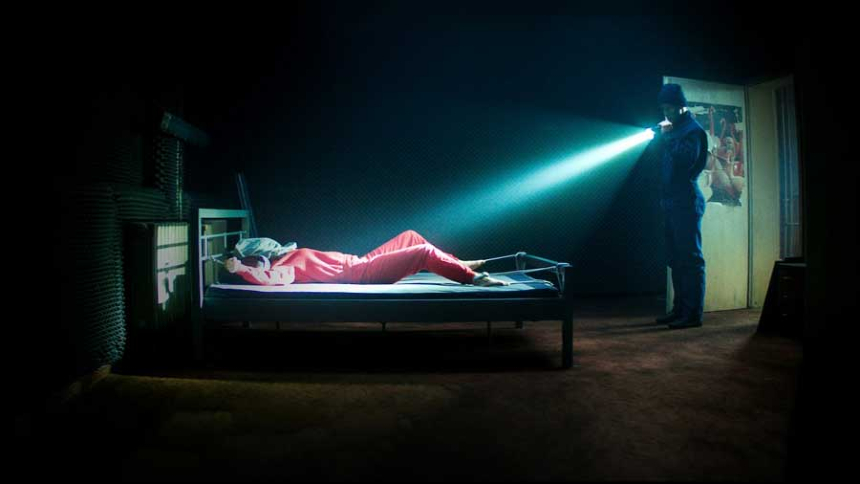 Inspired, this is not.

As the opening scenes of Thomas Sieben's Kidnapping Stella unfolded, I was instantly reminded of J. Blakeson's The Disappearance of Alice Creed (2009), in its crisp style, brisk editing, and story content. Two men prepare a vehicle without talking about what they are doing, and then their purpose becomes clear when they don masks and snatch a woman off the street, bind her up, and deliver her to a bed in an empty room in an otherwise deserted building, where they lock her up, demand information, make further threats, and then retreat into another room.

(The end credits of Kidnapping Stella reveal that it is, in fact, based on Alice Creed. Of course, Netflix always strongly suggests that viewers skip the end credits and watch their next recommendation.)

In any event, I waited for the inevitable new twists and turns that had been cooked up for this official remake. And ... nothing.

Oh, a certain twist is revealed right when it should be, and then ... nothing. The next twist is omitted. (Sorry, I'm trying to avoid spoilers if you're curious about this film and haven't seen Alice Creed.)

Instead, we are subjected to more and more noxious behavior, in attitude and dialogue, by the kidnappers, with the victim allowed almost no agency. Neither is any insight provided into the characters, beyond what we've already seen, so certainly no empathy, and precious little understanding, is permitted.

The contrivances, which are part and parcel of the original, become eye-rolling in this treatment, as much as anything because the ugly, nasty, unsympathetic tone becomes unbearable without the cleverest narrative thread of Alice Creed. The original also benefited immensely from the performances of Eddie Marsan (as the more dominant kidnapper) and Gemma Atkinson (as the victim).

The remake is cool to behold on a visual level, and that's the most positive thing I can say about it. The trio of actors here -- Max von der Groeben, Jella Haase and Clemens Schick -- do their best to bring their characters to vivid life. Unfortunately, they are hamstrung by the decision to omit what made the original truly different.

Summing up: Compares unfavorably with the 2009 original. Help yourself.

Do you feel this content is inappropriate or infringes upon your rights? Click here to report it, or see our DMCA policy.
Clemens SchickGermanyJella HaaseMax von der GroebenNetflixThomas Sieben