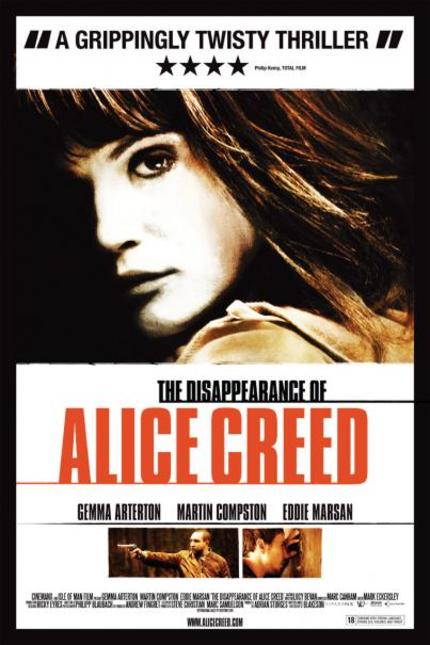 [Another consensus pick around these parts, and you'll be hard pressed to find a tighter or leaner thriller chamber-piece.  It makes a stop on its festival circuit at Fantasia before it gets a full commercial release.  Here is James' review from the archives, although there are many others, all positive.]

The Disappearance Of Alice Creed is a model of film-making efficiency, a low-budget kidnap thriller as lean as it is tense. The debut feature from director J Blakeson, Alice throws us headlong into the lives of ex-convicts Danny (Martin Compston) and Vic (Eddie Marsan - the memorably unhinged driver instructor from Happy-Go-Lucky), as they line the inside of a van with plastic, then go shopping for tools, a mattress and various other worryingly suggestive supplies. The seemingly mismatched duo meticulously prepare an innocuous flat, fitting extra locks to the doors and lining the bedroom with foam padding. They then kidnap young Alice Creed (Gemma Arterton) and bundle her into the van. Back inside the flat, Alice is tied down and stripped in a brutally efficient manner that implies all sorts of torture porn-esque misdeads are to follow, with the spectre of sexual deviancy alarmingly close. It transpires that their intention is not to chainsaw their abductee into small pieces, but rather to hold her wealthy father to ransom in an ostensibly well laid plan...

What develops is a character-driven thriller, where allegiances are frighteningly unstable and the controlling party is in constant flux. Starring only the three leads, and with the action confined almost exclusively to the fortified flat, Blakeson has crafted an admirably claustrophobic piece, with the growing paranoia palpable and your moral compass flicking back and forth with considerable uncertainty. The multiple twists are handled with aplomb, and even in its more audacious developments Alice remains gripping entertainment. It worth noting there's much to spoil here, so beware coverage of this one.

Arterton is superb, demonstrating a remarkable line in self preservation, both of the fight and flight variety. Marsan's Vic meanwhile is genuinely unnerving, at once both in resolute control of events and on the verge of total breakdown. Balancing him out is the subordinate Danny, a younger, slimmer and slightly mysterious accomplice, shifty and clearly not at peace with the plan. It's as well these actors are as capable and committed as they are -  given the intense focus on the dynamic between them throughout, less convincing performers would have killed this project at birth.

Whilst arguably the ending represents something of a cop out, for the vast majority of the running time Alice is a triumph of low-budget Brit cinema that deftly exploits its tight premise to the full, and points a disapproving finger at many a big budget effort.