Notes on Streaming: I AM MOTHER, Remain Calm, Don't Panic 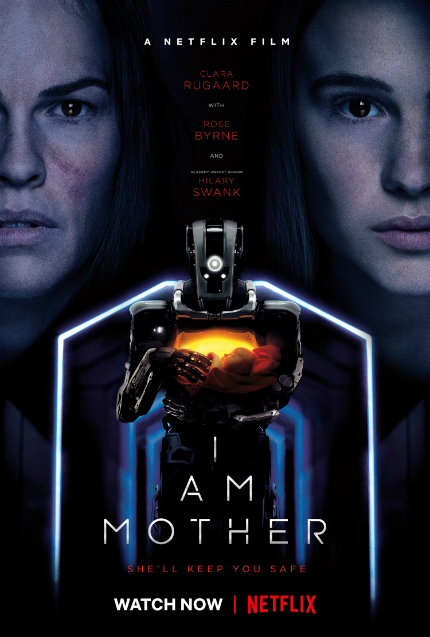 On a spaceship in flight from an "extinction level event," a robot mothers a human child.

I Am Mother
Now streaming on Netflix.

Like an illicit joint, someone passed me a paperback copy of Isaac Asimov's Foundation in 1972 and I quickly became addicted to science fiction. Screen adaptations were few and far between in quantity and quality at the time; I was happy to stick with the printed page and take advantage of everything I could find in the school and public library system.

My tastes were initially drawn to the great ideas that lay behind many tales, even if the writing itself was sometimes clunky. As my personal taste changed over the years, I began to appreciate stories that were more philosophical than action-oriented, and the same proved true when I was exposed to films.

Nowadays, though, it's rare to see science fiction on screen that is more interested in philosophical ideas than anything else. Perhaps that's why I enjoyed I Am Mother so much.

On a spaceship, a robot cares for an embryo that grows into a child with many questions and then into young Clara Rugaard, who looks to be in her mid to late teens and obeys the robot she addresses as "Mother" (voiced by Rose Byrne) with few reservations. One day, a stranger (Hilary Swank) arrives, complicating life and likely bringing danger, as well as an alternate story about what is going on outside the spaceship.

Written by Michael Lloyd Green and directed by Grant Sputore, the film is deliberately paced and thoughtful. As always with science-fiction screen adaptations, I question why the spaceship is so blasted large with such wide corridors -- a rant for another time -- but overall Hugh Bateup's production design looks very good, as well as Steven D. Annis' cinematography. Clara Rugaard rises to the occasion when needed and provided an exceptional lead performance.

Summing up: A pleasure to watch and think about.

More about I Am Mother