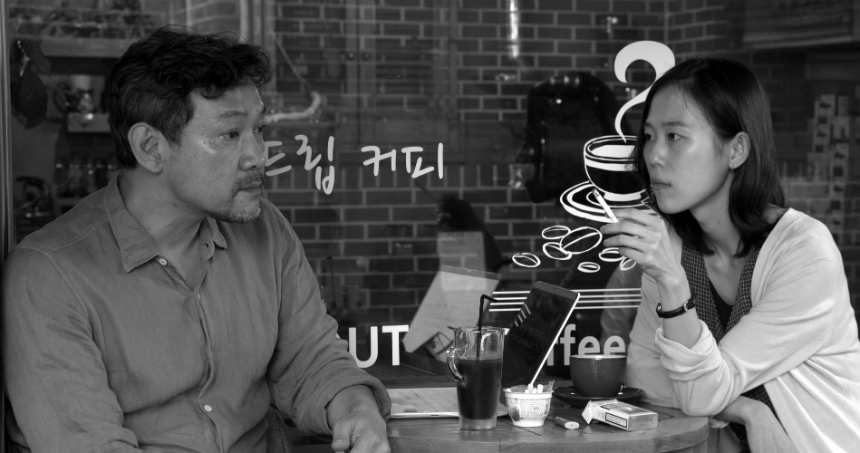 Yet another slight bunch of vignettes taking place in and around a coffee shop in Seoul, Grass is ever prolific Korean auteur Hong Sangsoo's latest film to be released in the U.S.

It sketches out in four different 'conversations.' Clocking in at a brisk 66 minutes, the film sees the director's ever-present muse, Kim Minhee, passively observing then participating in those conversations. Being in five of the last six Hong films, one can assume that Kim's contribution to his artistry is only growing.

Here, she is still a beguiling beauty, but shows that she can be merciless and downright nasty when she wants to be, even without the help of a usual, heavy consumption of soju. Grass is not groundbreaking or anything, but it's perhaps more cynical and darker than his other films. Still, Hong's human comedy continues with slight variations each time with delicious results. 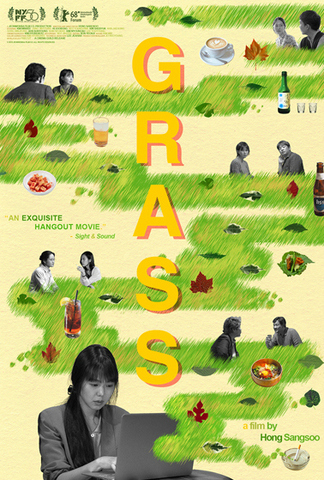 There is much discussion about death: the first conversation she eavesdrops on is from a young couple. Their chat starts harmlessly, then descends into emotional outbursts, the girl accusing the boy of their friend's death. Then there is an old stage actor, whose attempted suicide over a woman left him jobless and homeless. But his pupil can't bring herself to invite him to stay with her family. Areum makes assumptions and judges these people harshly in her thoughts.

What brings Areum's disdain out in the open is the presence of an actor/writer (played by Jung Jinyoung, pretty much a Hong stand-in), who is looking for a writing partner for his new script. After his request gets rejected by his writer friend (Kim Saebyuk), who chastises him by saying, "Writers write alone," he tries his luck on the beautiful stranger.

Areum outright says that she is not a writer. She just writes for herself. He insists that they collaborate. And in order to do that, he needs to move in with her and spend 10 days observing her. Saved by her younger brother's arrival, she excuses herself out of the conversation. On the street, she tells her brother with the tone of disgust how the actor came on to her.

Her nasty streak continues when she meets her brother's new girlfriend. She skewers the young couple for thinking about marriage without knowing each other too well: "You are already set up for a failure!" She then blows up on her brother for not picking up the check for their lunch and growls at him for being pussy-whipped.

It's no use to describe Hong's style here anymore: minimal long takes, goofy auto zoom and pan, two-shot long takes. He's obviously not interested in 'making a mark' with his 'style.' But with just one look at his films, everyone can recognize that they are his. No style has become his style. I heard him saying "because I ran out of things to name," when asked why the film is called Grass at Berlinale.

He tries different things here and there; notably in Grass, there is an extended over the shoulder shot where we don't see a man's face, then the camera pans to see his shadow on the wall gesticulating as the conversation heats up. The usual chicken scratch titles are gone and replaced by what looks like xeroxed title cards. Yet these (no) stylings don't add up to much, nor does dissonant classical music, that blares all over the dialog, which only serves more as an absurd comedic effect.

The later part of the film brings them all together back in the coffee shop, drinking a couple of soju bottles they sneaked in, thanks to the grace of the unseen, good-hearted shop owner. There you see Areum accepting an invitation to join the conversation. She's shown that she can take care of herself from unwanted and frequent men's advances, and when necessary, doesn't take shit from anybody. “Emotions are gullible and forceful, precious, cheap and alluring.” her voice-over says. Even if Areum looks down on everyone from her pedestal, at the end, emotions are what makes us human, Hong seems to say.

Review originally published, in slightly different form, during the New York Film Festival in September 2018. The film will open in select theaters in the U.S. on Friday, April 19, 2019, via Cinema Guild.

Do you feel this content is inappropriate or infringes upon your rights? Click here to report it, or see our DMCA policy.
Ahn Jae-hongHong Sang-sooKee JoobongKim Min-heeSouth Korea