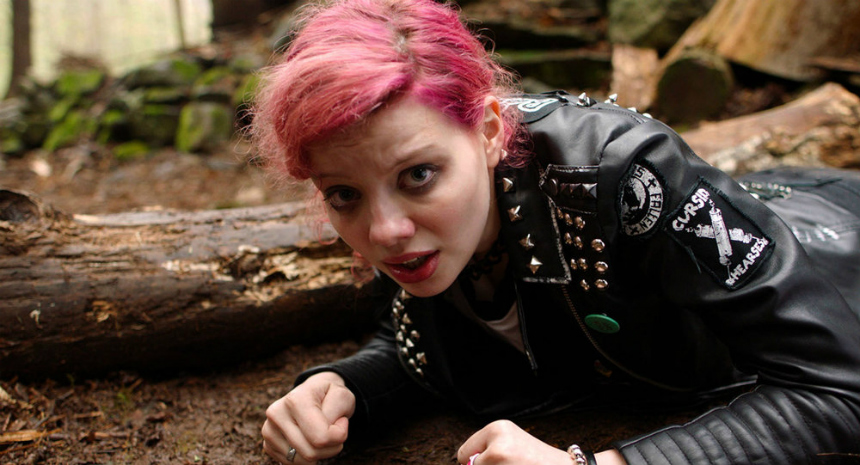 There is a deep and undeniable connection between punk music and horror films that goes back decades.

From the very beginning of the punk music movement in the '70s, bands and fans used horror imagery to separate themselves from those around them. In my own personal journey of discovery as a budding horror fan, punk music played a pivotal part in connecting the dots between my internal raging anger and its obvious violent expression on film. All of this to say that I've always been surprised at how infrequently this seemingly indisputable relationship has been exploited on film.

Director Jenn Wexler's debut feature, The Ranger, is the latest in a relatively small oeuvre of punk rock horror films, and it is one that takes the energy and explosive enthusiasm of the music and attempts to give it life on screen. It isn't entirely successful in putting a new classic on the table for fans to adore, it's definitely a heaping helping of bloody, obnoxious fun, and sometimes that's all I'm looking for.

Punk rocker Chelsea (Chloe Levine) and her snotty punk pals get caught up in a police raid at a show and go on the run to avoid getting picked up with a huge quantity of a new party drug called "echo." When one of the punks stabs a cop while saving Chelsea from certain doom, the crew decides it's time to go underground and they head into the woods of upstate New York. Chelsea's uncle had a cabin in the woods where they can hide, but these woods hold a lot of conflicting memories for her, and soon her past catches up with her in the form of a deranged ranger with an axe to grind. Literally.

The Ranger (Jeremy Holm, House of Cards, Mr. Robot) wants Chelsea all to himself, and will plow through her friends one-by-one to get to her. There's a complicated history between the two involving Chelsea's uncle, played silently by New York indie horror legend Larry Fessenden, and his unfortunate violent demise. She's not having it, though, so The Ranger goes on a spree, dispatching her friends in predictably violent ways, all to a frenetic punk rock soundtrack.

In punk terms, The Ranger definitely share the same kind of energy as the early '80s pre-hardcore music scene. A bit sloppy around the edges, the film at times trades enthusiasm for polish, resulting in a final product that is impossible to take seriously, but at the same time doesn't ask that of its audience. The film's characters, apart from Chelsea, are the kind of obnoxious cartoon punks that make normal folks uncomfortable, but the shallow characterizations reinforce the go-for-broke tone and allow the audience to identify more with Chelsea, though I would've loved to know her compatriots as more than just a bunch of irritating party kids.

I've stated publically on this site on more than one occasion that 1985 punk horror classic, The Return of the Living Dead, is my favorite film of all time, and while it's perhaps unfair to compare two films, it's also inevitable. The Ranger doesn't reach those heights by any stretch, but it's a competent, fun, bloody, and energetic addition to the canon of punk horror films that its creators can be proud of.

A lot of my issues feel like the follies of an excitable first time director, but then again, they didn't really detract from my enjoyment of the film so I can still give it a solid recommendation for fans of low budget indie horror, and not that hi-falutin' artsy fartsy stuff. This is a fun throwback with a killer soundtrack and enough solid kills in its 77 minutes (was that on purpose? if so, kudos) to sate spiky haired gorehounds everywhere.

Review originally published during the SXSW Film Festival in March 2018. The film will open in New York City at the IFC Center on Friday, August 17, and in Los Angeles at Laemmle's Music Hall on September 7. Visit the official site for more information.

Do you feel this content is inappropriate or infringes upon your rights? Click here to report it, or see our DMCA policy.
Chloe LevineJenn WexlerJeremy HolmLarry FessendenGiaco FurinoHorror