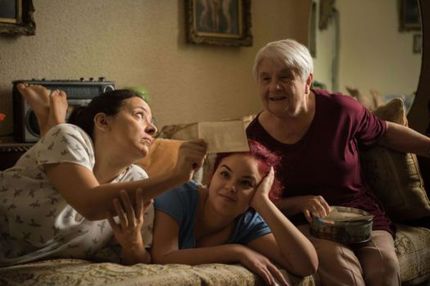 Contemporary Romanian cinema has established its steady presence in world cinema after the new wave boom. New talent emerged this year at Berlinale, where Ioana Uricaru introduced Lemonade, while experienced filmmaker Radu Jude netted the top honor at this year's Karlovy Vary International Film Festival for I Do Not Care If We Go Down in History as Barbarians. Locarno is no stranger to Romanian cinema; the Swiss gathering presented testosterone dramedy Charleston last year and brought the much expected, most recent effort by Radu Muntean, Alice T..

Following Tuesday, After Christmas and One Floor Below, the Romanian filmmaker returns on the festival circuit with a story co-penned by Razvan Ratulescu, the co-writer of the iconic The Death of Mr. Lazarescu and Child's Pose, and Alexander Baciu (Tuesday, After Christmas). Alice T. feels like a spiritual complementing piece to Calin Peter Netzer's Child's Pose, as a matriarch bends backwards to redeem her adult son from jail after he caused a fatal car accident.

Parental love, unconditional parental love, is one of the topics of Alice T., the eponymous protagonist being a 16-year-old girl whose feisty red hair foreshadows her feisty personality,  bordering on the pathological. Alice is a young-adult, non-occult counterpart of Rosemary's Baby.

Muntean opens his latest in a plain apartment, where Alice performs a Grand Guignol performance of child-parent relationships. The reason: a telephone. Temperamental Alice puts on a teenage angst drama combined with tantrums and a total disrespect of her mother. Right off the bat, the encounter plays almost comically as a hyperbole of sullen teenager.

Mom Bogdana found a message with a picture of stork carrying a baby, accompanied by the word "bummer" on her teenage daughter's phone. The exchange of opinions about the unwanted pregnancy goes on, back and forth, for some time, Alice pushing the envelope in an unacceptable behavior category every time. Once the cat is out of the bag, and Bogdana has to face the reality that while she could not have a child despite trying hard, her adopted daughter managed to do so without even trying to conceive in the first place.

The pregnancy is not the point; it is Alice's connection to her mother, peers and reality in the long run, through which she cruises as arrogantly and manipulative as she pleases. Muntean offers a portrait of a little Frankenstein who got all the love except for the tough one, a feat he achieves without being didactical or trying to school anybody on the ten commandments of being a parent.

On the contrary, Alice T. is a portrayal and examination of not only child-parent dynamics. The film  goes much deeper than an individual case, considering the widespread challenge of raising offspring in a welfare state as Romania transitioned from communism to capitalism, alongside a depiction of a generation that seems to be well equipped with narcissism and have no regard for consequences whatsoever, combined with an attitude that cries out, 'I do whatever the fuck I want'. Muntean just adds recklessness and shocking irresponsibility into the mix, while preserving the plausibility and remaining very convincing.

Alice's frolicking may be viewed as and defined by the lack of a parental figure, as the male influence takes a back seat and leaves the reigns of rearing in the hands of the mother. However, the casting of male role models draws attention in the intertextual level, as Alice's adoptee laidback father is portrayed by Serban Pavlu, the serious half of Charleston, while her mother's current boyfriend is depicted by Bogdan Dumitrache, the father driven to the brink of madness by the alleged kidnapping of his small daughter in Pororoca. Both gentlemen enjoy a tiny fraction of screen time compared to their outings in their previous lead roles.

The recent host of Romanian productions, such as the previously mentioned films, mark a new era in the Romanian New Wave, departing from the aesthetics that put it on the world map. Stylization replaces hand-cam, the bleak palette traded for brighter colors, as the films feel less like social realist dramas. One scene clearly embodies the transition, a callback to 4 Months, 3 Weeks and 2 Days. The gruesome scene the generated the buzz around Mungiu's film is tackled lightly, almost with a slapstick delivery. The director himself appears in the scene.

Alice T. is yet another proof that Romanian cinema is reinventing itself. Radu Muntean remained coy about the ultimate punchline of his latest offering that possesses certain ambiguity. It can be easily a comedy of a narcissistic child terrorizing a parent, a sort of generational portrait or simply about unconditional mother's love and the consequences. Whatever the version viewers pick, Alice T., similarly to Charleston, has a potential to reach a wider international audience.