Pretty Packaging: That Gorgeous STAND-ALONE COMPLEX Boxset Is Back, But Bigger And English-friendly

Ard Vijn
Editor, Europe; Rotterdam, The Netherlands (@ardvark23)
Tweet Post Submit
If you see the pictures in this article and think you've seen them before, you may be right about most of them. Last year, the French branch of distributor All The Anime released an absolutely kick-ass Blu-ray boxset of the seminal anime series Ghost in the Shell: Stand-Alone Complex, and I wrote a "Pretty Packaging" article about that release.

All The Anime's British branch is Anime Limited (yes, them), but they did not have the rights for the English-speaking markets, so the French set did not have an English dub or subs.

Well... the company that DOES have the publishing rights for Britain is Manga UK, and they have now released Ghost in the Shell: Stand-Alone Complex with that very same packaging. The stellar art-book has been totally translated to English, and the discs now carry English dubs and subs. There are differences though: the set is now on 11 discs rather than 12, yet the set now includes one extra film the French version lacked: the cinema-outing Ghost in the Shell: Stand-Alone Complex: Solid-State Society.

All in all this is splendid news for English-language anime collectors. I like the French subtitles slightly better, but... well, they're French, heh. Seriously folks, this is one splendid set. So even if it's a bit of a repeat performance, here is a gallery of shots. Click on the edge of the pictures to scroll through them, or at the center of each to see a bigger version! 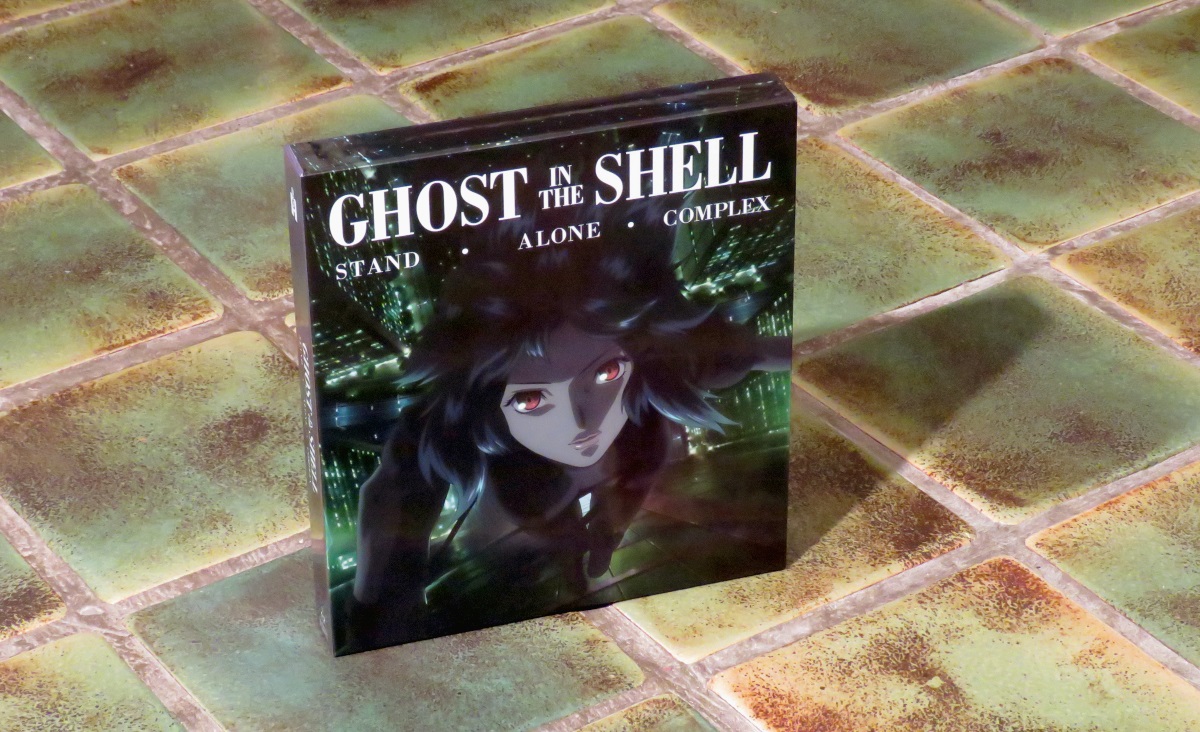 Here it is: a box consisting of a hard cardboard slipcase. This is a big one though, easily coffee-table-book-sized.

(Note: this is the French one, but both are exactly the same size) 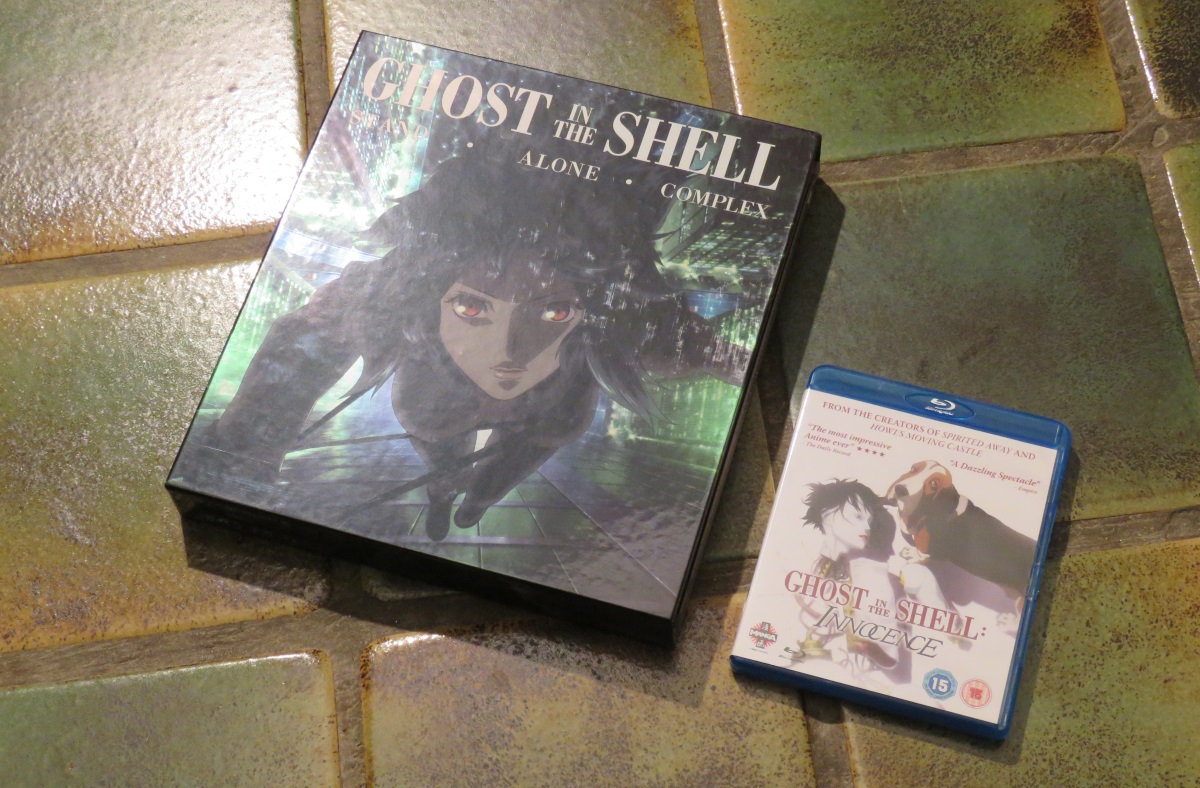 Nice and shiny, the whole package has a metallic sheen. To show the size I've put a regular Blu-ray next to it, so you can see just how big this baby is.

(Note: this is the French one, but both releases are exactly the same size) 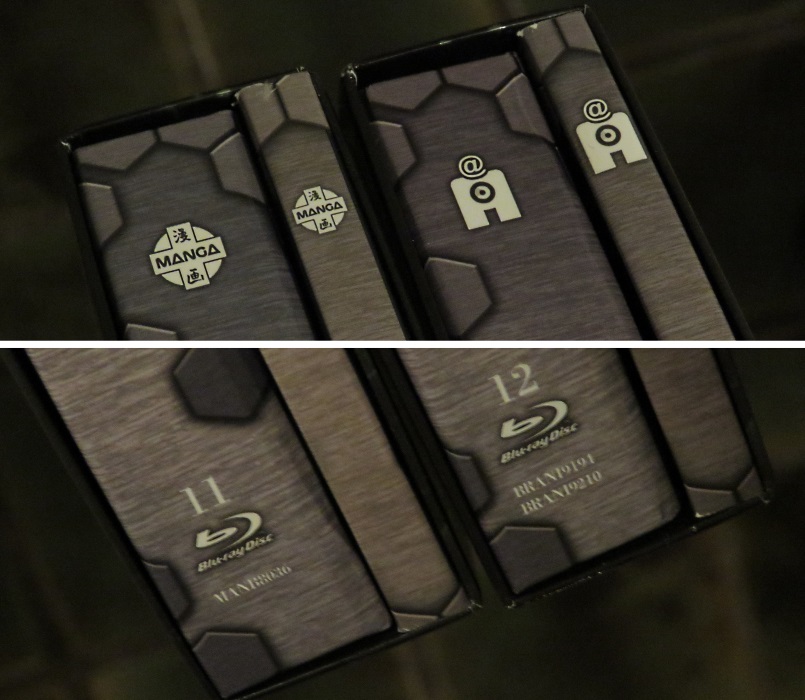 The spines of the slipcases and contents show the only difference in appearance: That's the English Manga UK logo on the left, and the French All The Anime logo on the right. 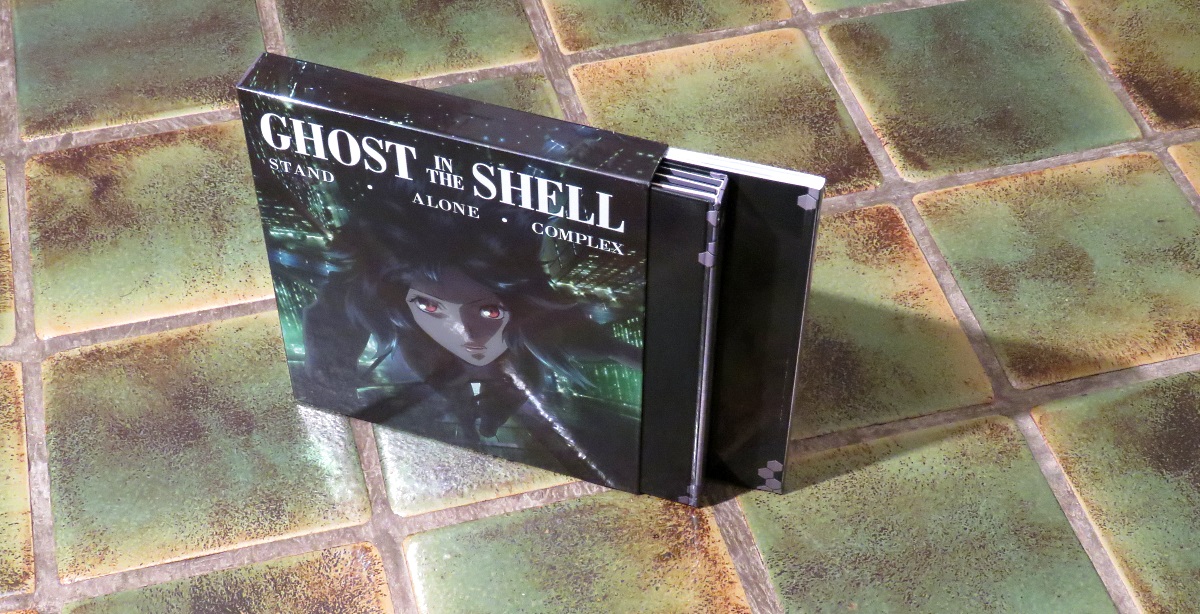 Inside the slipcase reside a BIG digipack and a BIG book.

(Note: this is the French one, but I can't spot a difference...) 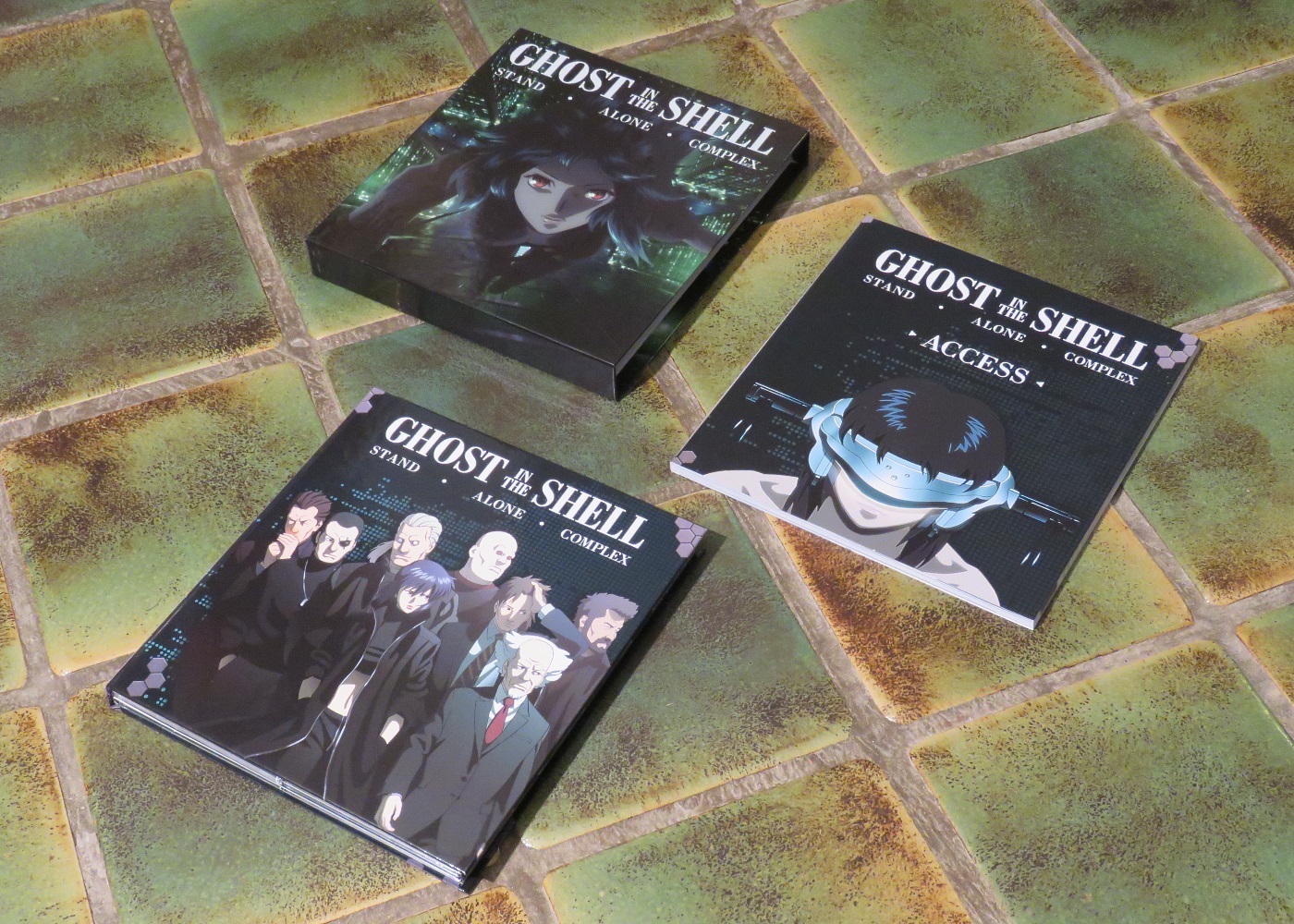 All contents on display.

(Note: this is the French one, but I can't spot a difference...) 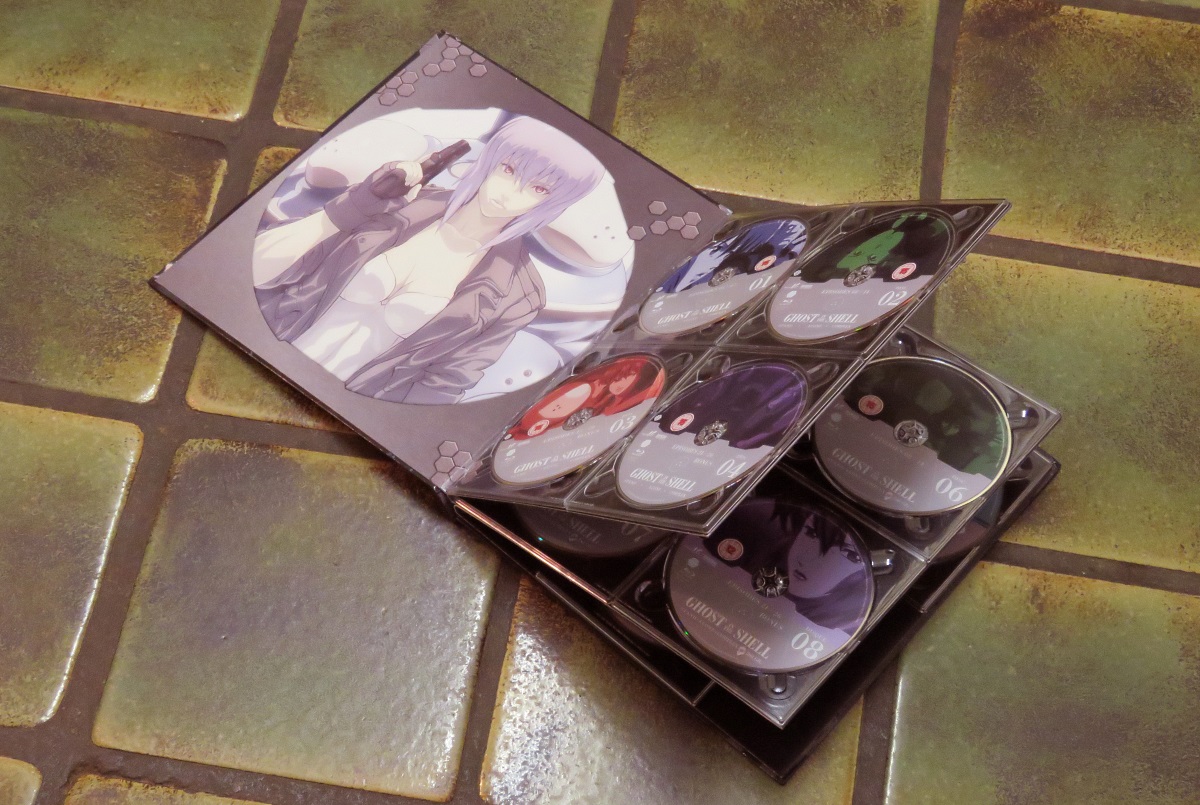 The digipack stacks eleven discs. The two series are in two layers of four discs, and each "page" is accompanied by some damn fine artwork.

Moving to the last page, which is the third layer... 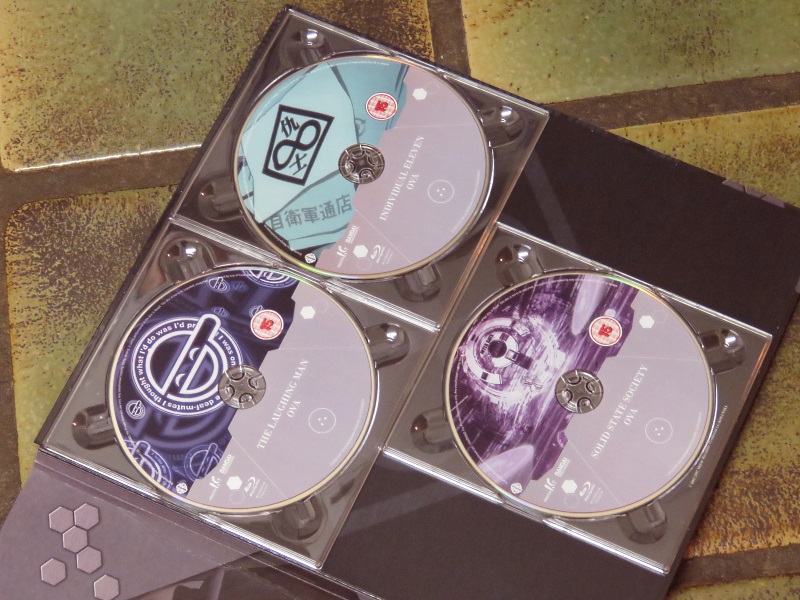 Yep. There are all the cinematic outings of the series. We get the two edited film versions of the two seasons, and now the one film-only feature Ghost in the Shell: Stand-Alone Complex: Solid-State Society is part of the set as well. 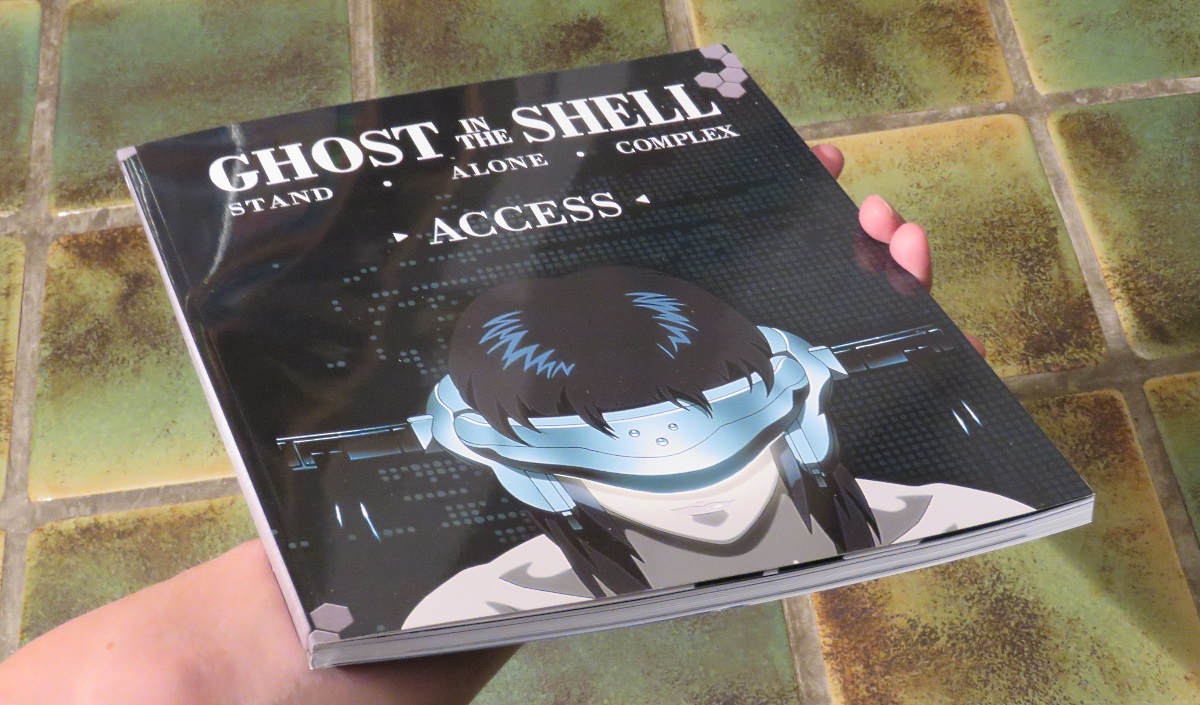 Here is the book. Normally I'd say "booklet", but this one is the size of a coffee-table book and is 144 pages thick, so...

(Note: this is the French one, but I can't spot a difference from this angle...) 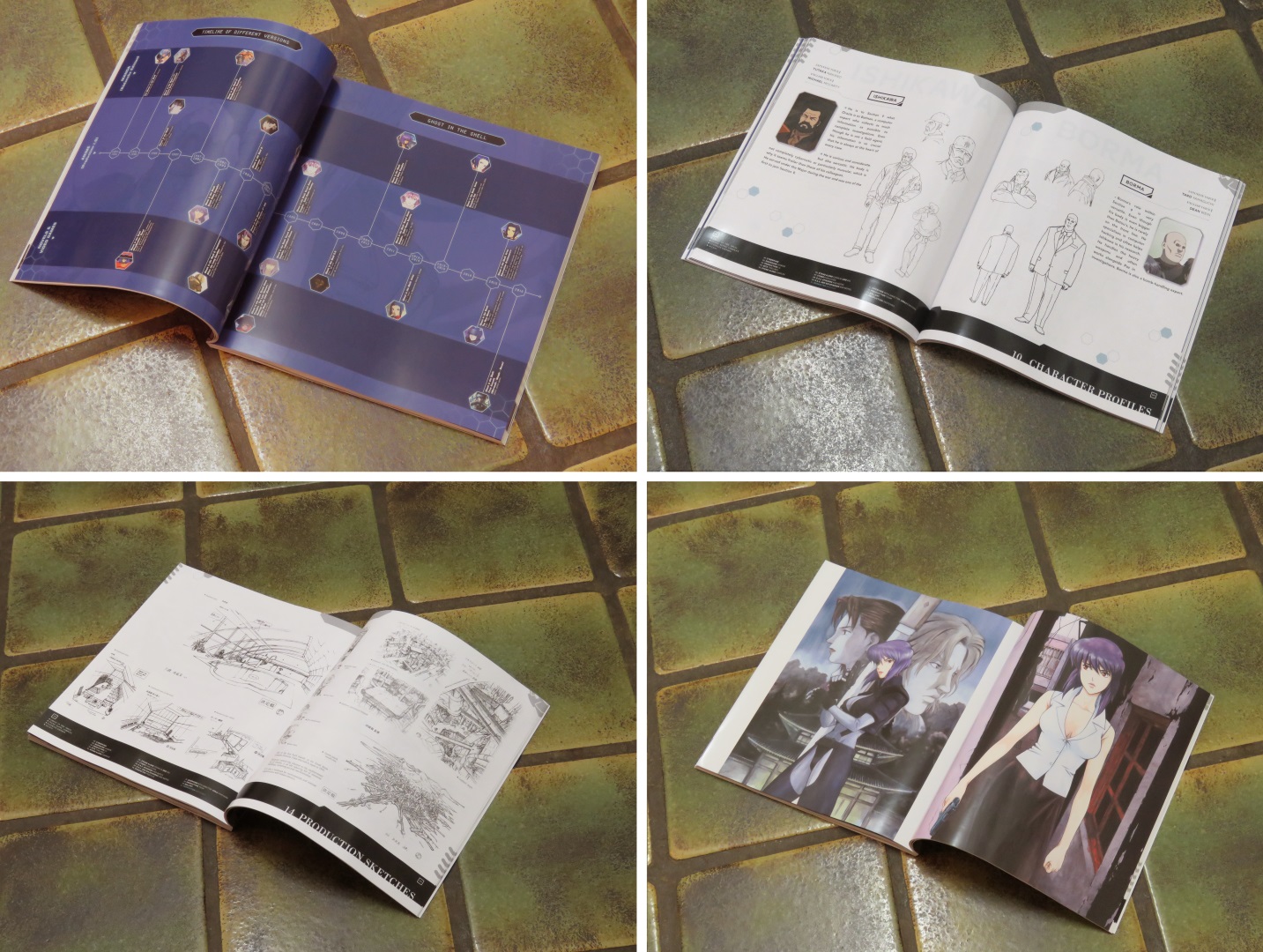 In it, there are some big articles including an interview with Kamiyama Kenji, episode overviews, designs, backgrounds, big glossy page-size versions of all the DVD artwork, a look at manga creator Masamune Shirow's impact on film and anime (including an impressive overview of all the titles he's been associated with), and a "universe" timeline which shows when all the different adaptations of Ghost in the Shell take place, including Oshii's films and the Arise series.

In short: it's a stellar companion piece to the series. I'm still impressed. And it's all been translated into English now, liner-notes and all.

The (back)end of another great Blu-ray release by distributor Manga UK.

I've given them some grief (cough-cough...) over some of their DVD releases more than a decade ago, but I haven't had any problems with their HD catalogue yet. And this release is a stunner. Much recommended!

(Note: this pic is of the French one, but if you noticed that you've got GREAT eyesight...)