PATH OF BLOOD: An Animated Samurai Film Created in a Kitchen 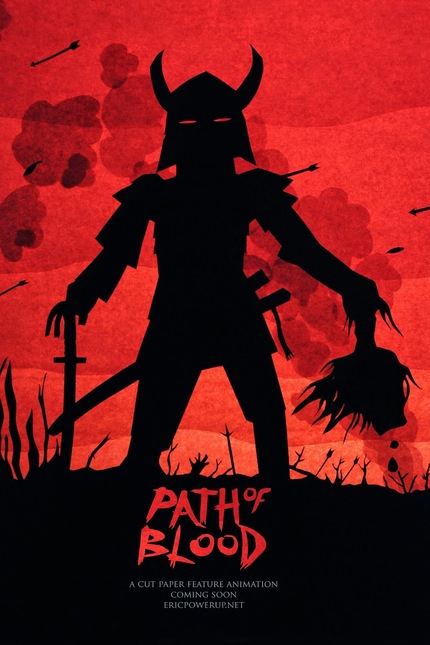 They say everyone now has access to the tools to make a film and Path of Blood is something of a testament to the romantic idea that anyone can make anything if they just put their mind and talent to good use.

A blood-spraying, sword-clanging, mind-blowing samurai epic, Path of Blood was made entirely inside the confines of one man's kitchen and resonates with the kind of singular artistry that only the rarest of DIY projects can offer.

Synapse Films has announced they will bring this one-of-a-kind slice of animated madness to Blu-ray along with an array of bonus features that take you inside the mind of its creator.

Path of Blood is the first animated film by Eric Power. Shot frame-by-frame in traditional paper stop motion (like the pilot episode of South Park), the film boasts a unique visual style paired with a visceral tale of samurai, bandits, and deadly ninja. Many years in the making, this film is a love letter to the Japanese samurai genre, as well as a tribute to the ultra-violence of the Lone Wolf and Cub series.

Synopsis: Japan, 1614. War is over. Samurai displaced through defeat or reform wander the countryside as Ronin, seeking work where they can find it. At the edge of a forgotten village lies a path leading deep into the mountains. It is rumored the brave few who make it down the path will be rewarded with a life of freedom and purpose. However, none who have entered the path have returned. When a lone samurai sets his course towards the Path of Blood, unknown danger and terror awaits. Will his great swordsmanship be enough to survive?

Do you feel this content is inappropriate or infringes upon your rights? Click here to report it, or see our DMCA policy.
AnimatedBlu-rayDIYDVDIndiePath of BloodSamuraiSynapse Films

More about Path of Blood