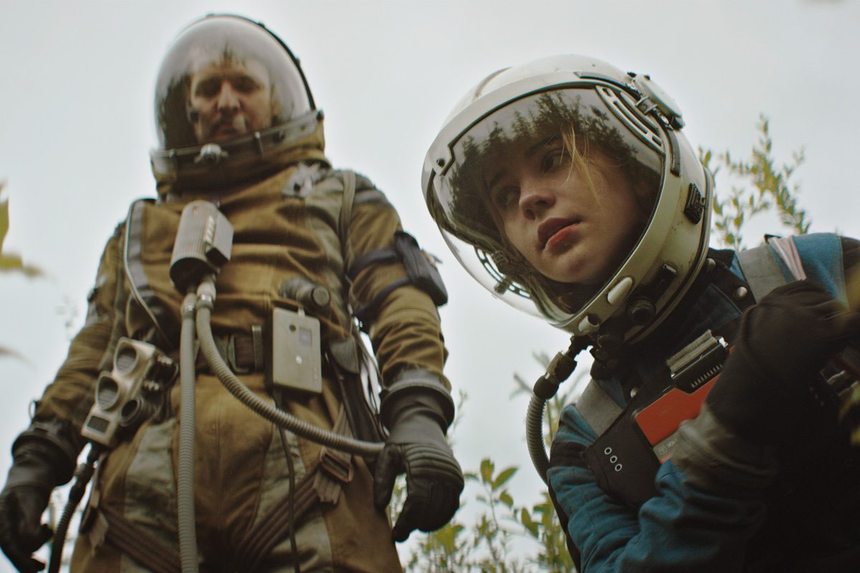 Prospect begins with an alien moon rotating through the grungy windshield of a massive orbiting space station.

But instead of the sweeping orchestral score you might expect -- one to signify the epicness of the moment -- an equally grungy garage rock song clatters over the soundtrack. It's jarring, but there's a point. Cut to our lead, Cee (played by Sophie Thatcher), focused on a notebook she's writing in, listening to the track on a pair of retro-chic headphones; she's a recognizable teenager if there ever was one.

The point of this anachronism is immediately clear. Co-writer/directors Zeek Earl and Christopher Caldwell are communicating something many science fiction films forget: that it doesn't matter the time one finds themselves in, human concerns remain the same and the prospects of coming-of-age are no less messy or full of hardship.

Prospect, which began life as a 2014 short film, is a lean sci-fi Western that oozes atmosphere. It's gorgeously realized with a sort of 70's production design so detailed it will make fans of Ron Cobb weep with joy. It also brings the astronaut-on-an-alien-moon art of Dan McPharlin to life in a way I never thought I'd see, so I wasn't surprised to learn McPharlin actually worked with the production on the development material.

But beyond aesthetics, the film's lived-in look also serves a purpose. Like many Westerns before it, this is a frontier story about people with nothing to lose, moving to savage territory to risk everything for the prospect of a better life. In this case, the goal of the prospectors is not gold but "Aurelacs", an alien precious stone (element?) that needs to be harvested from fleshy alien sacs through a dangerous and challenging procedure that requires deep skill. It's wonderfully weird...

As the film begins we see that the relationship between Cee and her father (played by Jay Duplass) is strained. They are of a lower class. Their equipment is faulty, or second hand. Their relationship is also complicated by drugs and resentment due to the death of Cee's mother. Duplass is tough in the film, a good look for the usually quieter brother of the more gregarious Mark Duplass, but not such a good look in the context of the film, as he seems willing to sacrifice Cee's well being for his own ends. He's like a gambler who doesn't know when to quit. And indeed the idea of parental sacrifice is a theme throughout the film.

Things are complicated when the scavenging duo make contact with a charismatic prospector played by the equally charismatic Pablo Pascal (Game of Thrones). You can tell the writers had fun with Pascal, bringing his character to life with period dialog right out of Deadwood . His mouth has clearly gotten him out of more than a few jams in the past (let's see that movie!).

Thankfully Pascal works gangbusters here, because much of the film's story hinges on the relationship that forms between him and young Cee; their character arcs intertwine in an intriguing way.

Prospect's overall story is definitely spare, and likely by design, but even if it leaves some audiences wanting more from the world it sets up, the film does an admirable job mining its most important element: humanity. Earl and Caldwell show they can balance building worlds and characters equally, while Sophie Thatcher stands out as a newcomer worth watching.

At the end of the day, I can't remember being as taken by a sci-fi newcomer since Moon and if we're lucky the filmmakers here will be given as many chances as Duncan Jones has to bring their worlds to the screen.

Do you feel this content is inappropriate or infringes upon your rights? Click here to report it, or see our DMCA policy.
adventureJay DuplassPablo PascalProspectreviewsci-fiSophie ThatcherSXSW 2018western