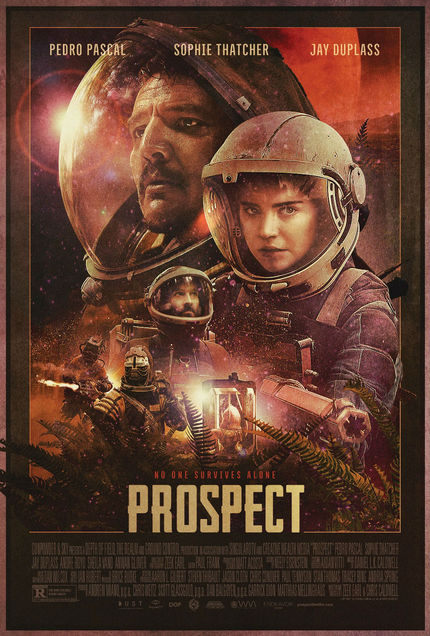 Written and directed by Zeek Earl and Christopher Caldwell (In The Pines), Prospect has been hailed as one of the strongest indie sci-fi films since Moon.

It is about a father and daughter who are following their path through the galaxy in search of the ultimate payday. They quickly fall prey to unknown terrain and dangerous encounters as their prospecting mission turns deadly.

Prospect stars stars Pedro Pascal (Game of Thrones, Narcos), Sophie Thatcher (The Exorcist) and Jay Duplass (Transparent). It is based on a short by Earl and Caldwell. It had its world premiere at SXSW 2018 to critical acclaim where the film took home The Adam Yauch Hörnblowér Award reserved "in honor of a filmmaker whose work strives to be wholly its own, without regard for norms or desire to conform."

Do you feel this content is inappropriate or infringes upon your rights? Click here to report it, or see our DMCA policy.
2018Ground ControlJay DuplassPedro PascalPosterProspectsci-fiSophie Thatchertrailer