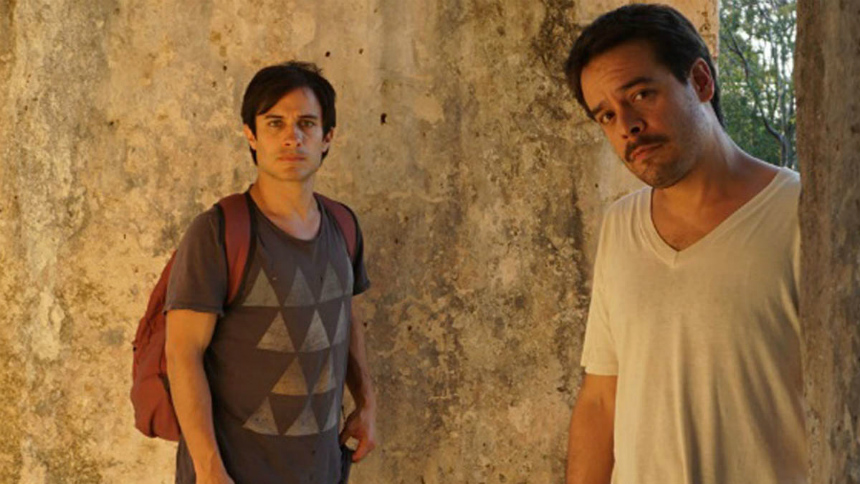 Having won the Best First Feature Award with his exquisite debut Güeros at the Berlinale in 2014, director Alonso Ruizpalacios now excitingly returns to the festival's Main Competition with Museo (Museum). This sophomore effort feels much larger in scale, and it stars rapidly rising actor Gael García Bernal (Neruda) - who also exec produced - so it could well be a great success.

Gone is the irresistible black-and-white cinematography of Güeros, but the director does continue his collaboration with cinematographer Damian Garcia; so what we get is a brightly colourful movie that loses little of its predecessor's playfulness. In fact, Museo is very much rooted in the same spiritual soil, exploring as it does the complicated divisions in Mexican society, and telling a similar tale of "good boys" doing stupid things.

This time we're drawn into the company of Juan Nuñez (García Bernal), a disaffected young mamma's boy who drags hapless, life-long friend Wilson (Leonardo Ortizgris) into a half-baked heist. Their plan? To rob Mexico City's invaluable anthropological museum, where Juan has been casually working to raise money for pot. That's right, we're in the realms of a playful, yet artsy Mexican heist movie, and the humour that creates is just as delightful as you might imagine.

There's all kinds of funny digs at Mexican (in)competence, on an almost national scale. For example, the museum's priceless collection isn't even protected by an alarm, and our soft-hearted amateurs constantly shush each other as they clumisly make too much noise robbing the place. Meanwhile, the cops searching for them manage to do little more than confuse Juan for a movie star (one of the Museo's particularly excellent meta jokes). Essentially everyone in the film comes to seem like a well-meaning, bungling idiot, and it's great light-hearted fun.

But being a Ruizpalacios' movie, Museo is never one-dimensional. Like Güeros, it's just as rooted in the ambivalences of modern Mexico, and in this instance that has a lot to do with how the director frames the robbery. The whole opening sequence builds up Juan's relationship with the museum - from faded memories of a school trip to recollections of when it first opened. Here, the movie switches into archival footage: we see a giant monolith of an ancient diety uprooted from an indigenous community, and unthinkingly transferred to the new exhibition.

Then Ruizpalacios' textbook voice over, which seems to constantly echo the humour and flourishes of Mexico's fine magic realist novelists, introduces questions of who is robbing who. Is the opportunistic theft of Juan and Wilson any worse than the cultural theft carried out by the Mexican government? And is stealing something that's already been stolen even theft at all? These questions may seem to have obvious answers, but when mixed with the very complex and well-studied humanity of Museo's characters, things rarely come to seem so simple.

This is particularly true for the motivations behind Juan's actions. As a well-educated, relatively monied member of Mexico's white society (a social group that seems to obsess Ruizpalacios), it becomes very unclear as to why an otherwise decent boy would feel the need to try to steal his nation's most prized objects for money. At times, he even seems deeply informed about cultural significance these objects have, and his actions then almost then take on the quality of a dissident act of reappropriation on behalf of Mexico's indigenous population. But at numerous other moments, it's as if Juan does what he does purely to do anything at all with his life.

So, just as with Güeros, we observe a generation of Mexicans who seem completely beholden to quests that could be seen as feckless. Or depending on the interpretation you choose to make, incredibly meaningful. Similarly to this previous film, Museo also contains another fictional idol (this time a porn star named Sherezada, rather than a music legend), and Juan seems just as taken with her as he is with his ambiguous crime. Ruizpalacios therefore manages to create yet another film where Mexican culture seems anxioulsy trapped between being deeply intelligent and profoundly daft, and it's quite the philosophical masterstroke when you think about it.

But even if that doesn't sound like your kind of thing, Museo is worth watching for its magic visual flourishes alone. Whether it's the incredibly unusual scenes of a group of school kids preparing for flute practice, the unexpected split screens, the sly upside-down footage, the unsteady running shots or the fleeting moments of birds-eye view, this is a feature that is constantly pushing the cinematic envelope, and it's a wonderfully playful twist on heist movie as a result.

Ruizpalacios' work is difficult not to love, but I guess I definitely cherish Güeros just a little bit more... That movie was just that bit more uncompromising; a bit more tangibly the vision of a creative who had clearly been waiting to unleash his stories for a lifetime. But even if that's the case, I strongly advise sampling anything to which this director lends his very distinctive humour and cynicism.

Do you feel this content is inappropriate or infringes upon your rights? Click here to report it, or see our DMCA policy.
Alfredo CastroAlonso RuizpalaciosBerlinale 2018Gael Garcia BernalLeonardo OrtizgrisMexicoManuel AlcaláCrimeDrama