Pretty Packaging: YOUR NAME Will Be Remembered

Ard Vijn
Editor, Europe; Rotterdam, The Netherlands (@ardvark23)
Tweet Post Submit
A year-and-a-bit ago, Shinkai Makoto's Your Name was released in Japan. It struck the box office like a meteorite, sending financial shockwaves all over the world. Depending on which (ac)counting method you use, it is either ONE of the highest-grossing Japanese film ever made or THE highest-grossing Japanese film ever made.

Its success unfortunately also made it hard to see it in certain areas of the world. Festival screenings were forbidden after the first of April, as the film had proven itself to be so popular internationally, that the rights-holders decided that Your Name could only be bought for regular distribution after that date. The one festival which was able to show it in the Netherlands (in March, mere weeks before the deadline) had two screenings which sold out in minutes. I wasn't in either of those. Grrr...

Meanwhile, Your Name became the highest grossing anime ever in the United Kingdom, courtesy of Scottish distributor Anime Limited. So I was following them with laser-vision, waiting for their eventual Blu-ray edition. It has now arrived, and as irony will have it, in the same week as when Your Name has finally been released theatrically in the Netherlands. Go figure. Nice one, fate! Regardless, I'm happy to say that the film is absolutely fantastic, one of the best I've seen this year.

Anyway, Anime Limited was kind and smart enough to also release a pimped Special Edition. Its packaging looks mighty fine, so here is a gallery of shots. Click on the edge of the pictures to scroll through them, or at the center of each to see a bigger version! 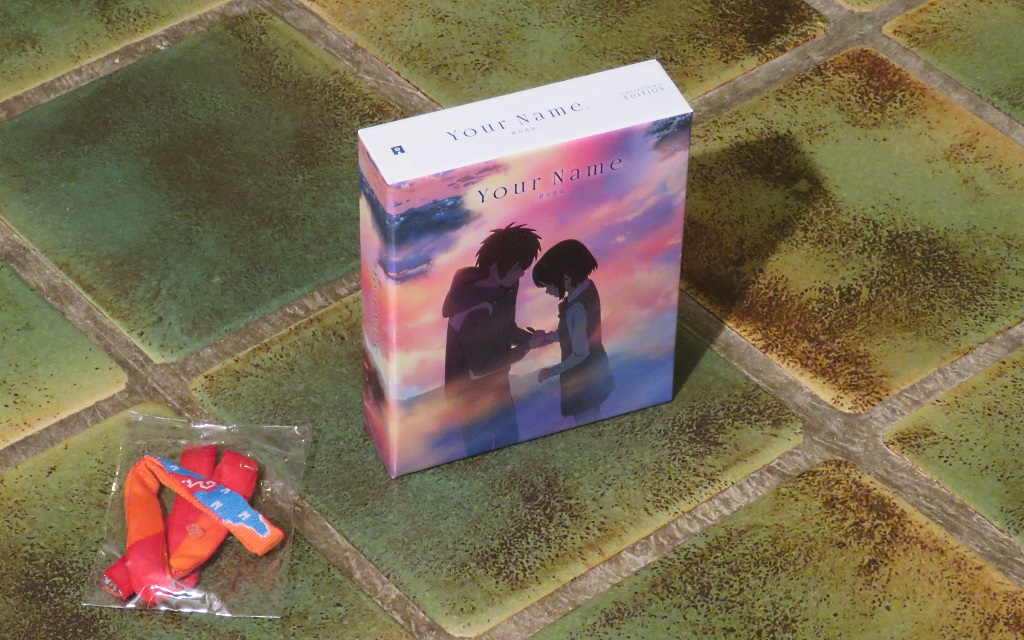 And here it is: a thick cardboard box, and a small plastic bag with a ribbon which didn't fit inside any more. 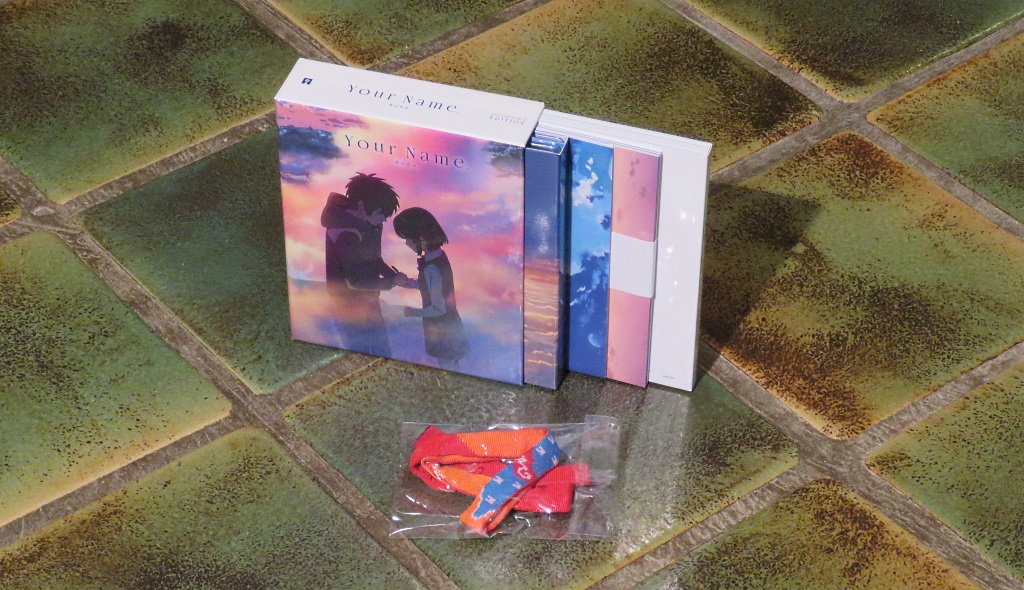 That's a good sign, and indeed: the box is stacked! Inside are a three-disc Digipak, a folded poster, art cards, and a book. 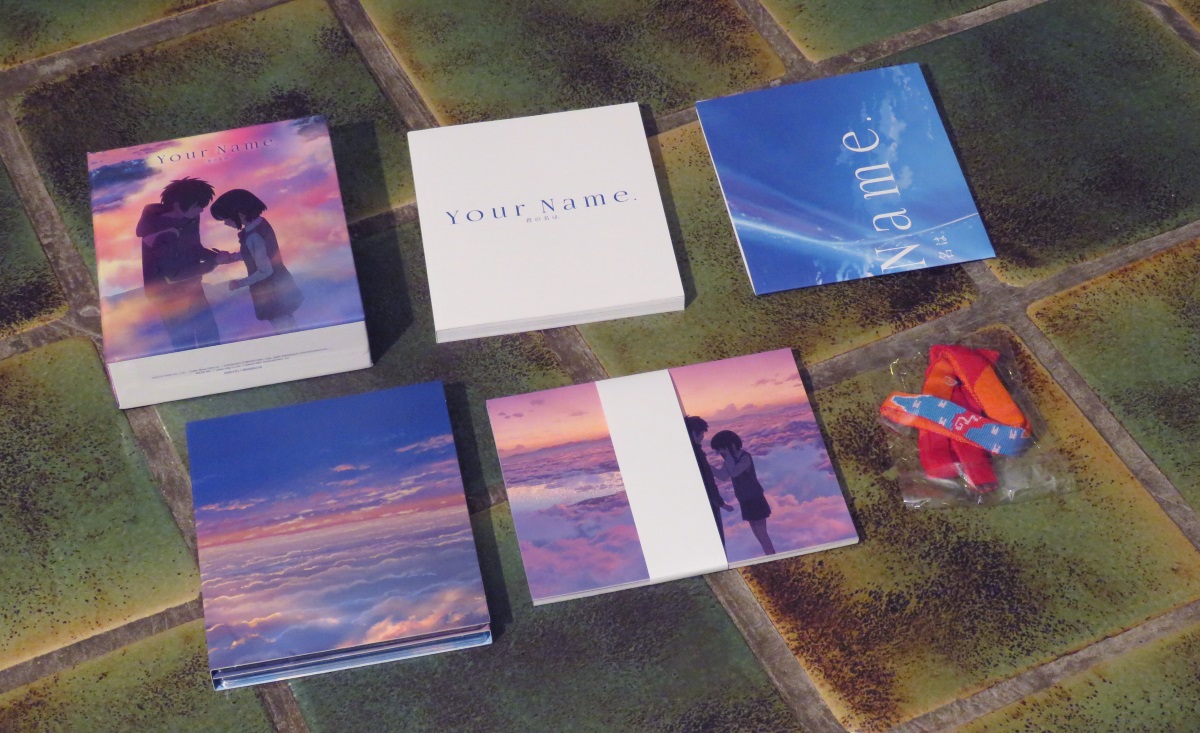 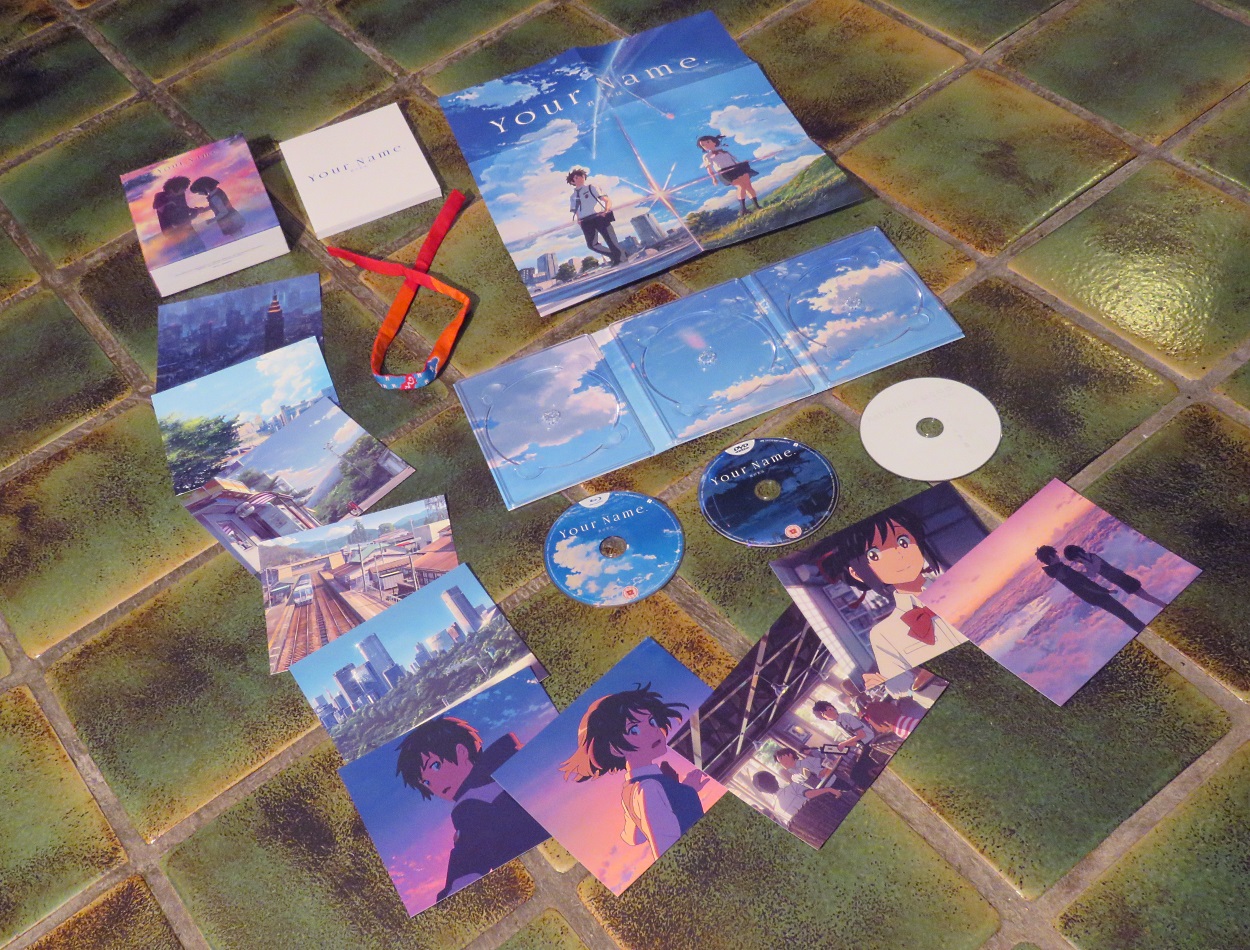 The discs contain the Blu-ray version, the DVD version, and the Radwimps soundtrack CD.

The backside of the Digipak, showing great yet understated artwork. 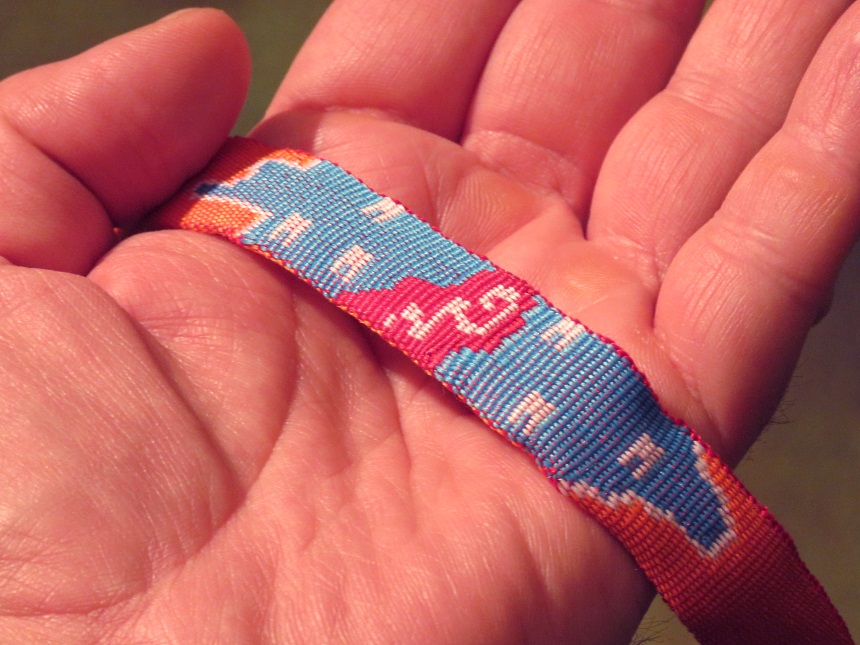 A close-up of the ribbon, I first wondered what the hell kind of extra this was, but after you've seen the film, it's the nicest trinket they could possibly have included. 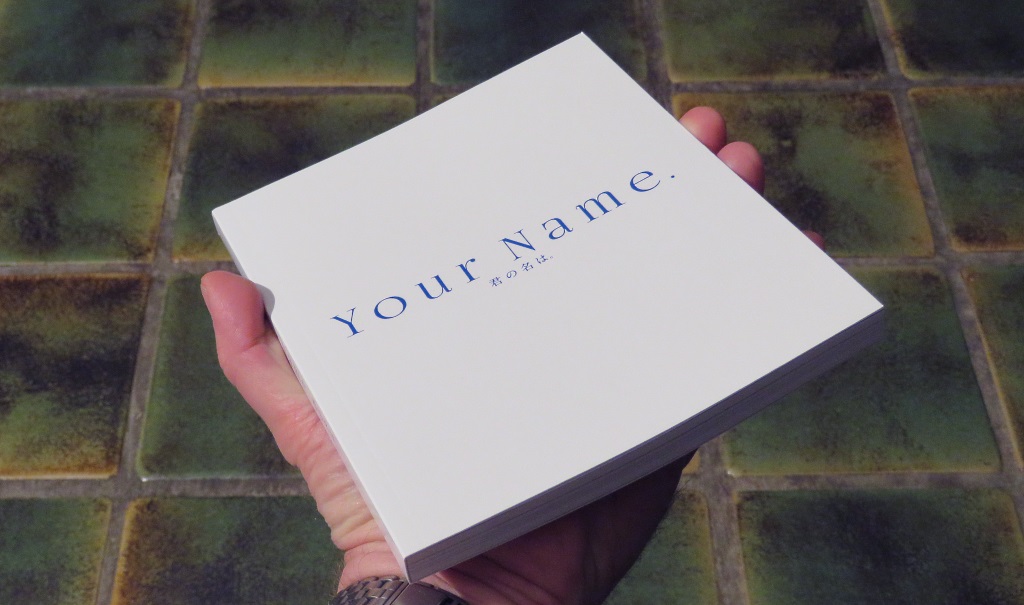 A closer look at the book, which is 128 pages thick. 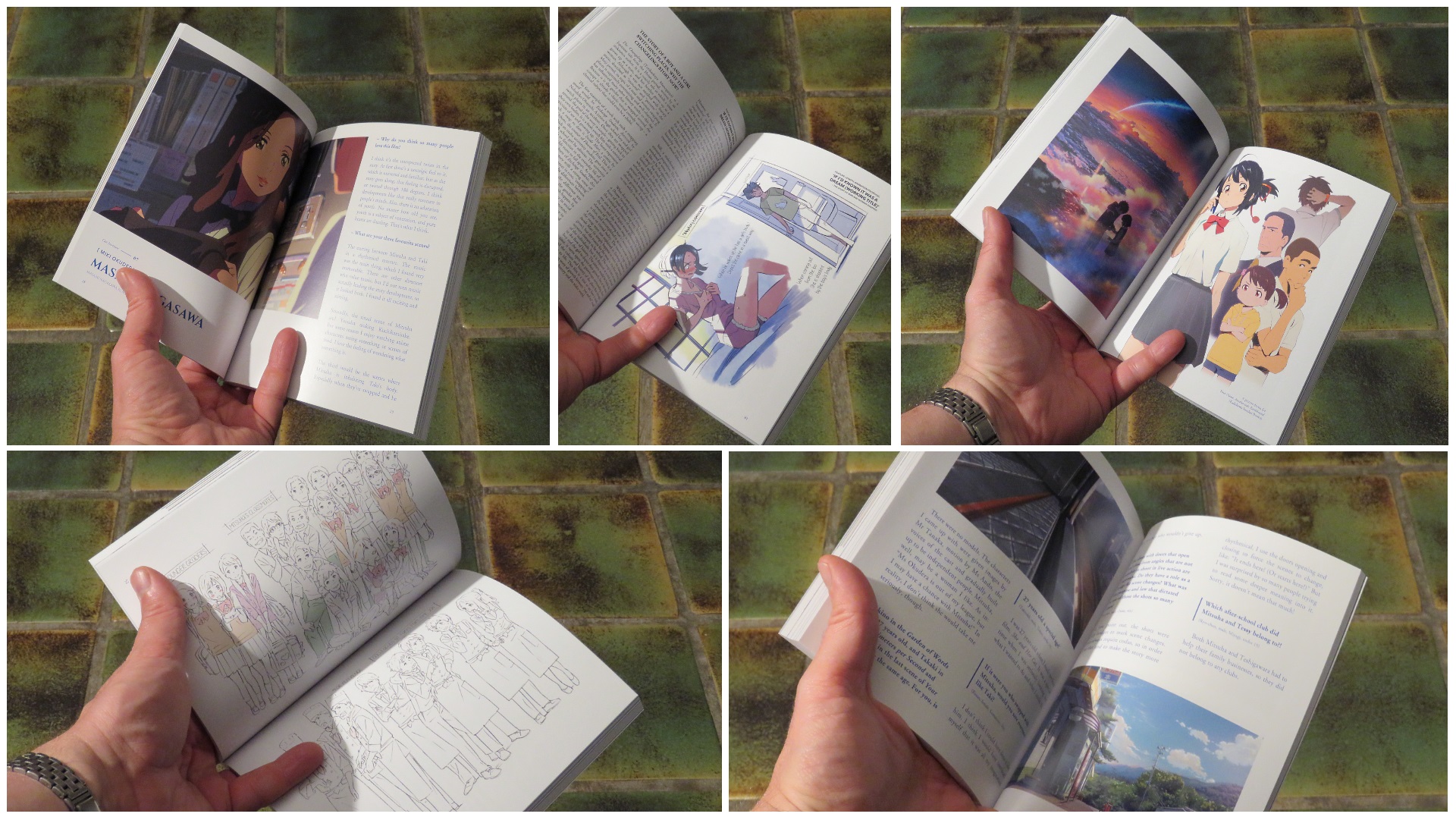 Inside you get interviews, designs, backgrounds, advertisement artwork, the lot! One interview is with Shinkai Makoto, taken after the film's phenomenal domestic success, and he discusses how this has affected him. Great stuff, and just about the perfect extra after seeing the film. 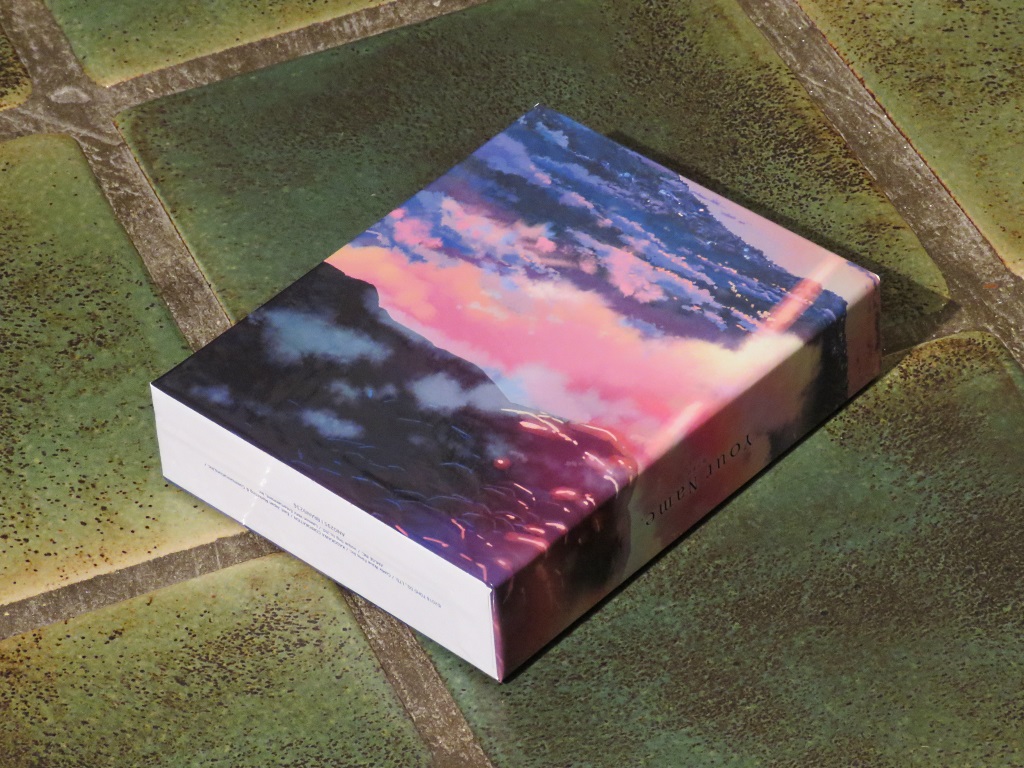 The (back) end of a great edition, of an utterly fantastic film.