Review: YOUR NAME, A Wondrous Delight From Start to Finish 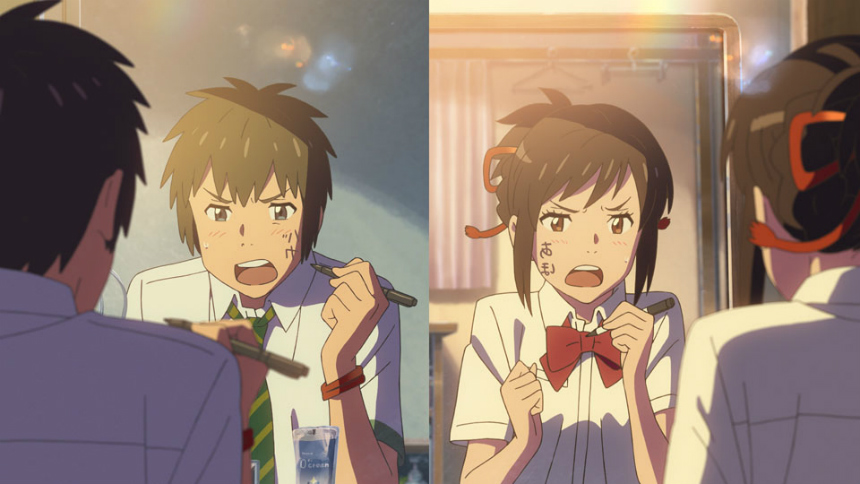 Body swapping, time displacement and comets of mass destruction all feature prominently in Makoto Shinkai’s heart-wrenching adolescent romance. Boasting an infectious soundtrack by RADWIMPS and luminous animation, Your Name proves a winning combination of laughter, tears and occasionally mind-bending concepts about the time-space continuum.
Mitsuha (Mone Kamishiraishi) is a typically awkward high-school girl in a small Japanese village. Living with her grandmother and younger sister, she longs to escape her simple life for the big city, and at night dreams she is a hip Tokyo schoolboy named Taki. What Mitsuha doesn’t realise at first is that Taki actually exists and her dreams are very real. Two or three times a week, Mitsuha inhabits Taki’s body and is forced to live his life - negotiating the bustling streets of Tokyo to get to school, hanging with his classmates, playing basketball, even working his job as a waiter at a busy restaurant.
Simultaneously, Taki (Ryûnosuke Kamiki) is suffering the same fate. Waking up inside the body of a pubescent schoolgirl, Taki must master how Mitsuha ties her hair, cooks for her family, copes with her bossy dad being the mayor, and participating in local village rituals. While everyone around them thinks they are going crazy, Mitsuha and Taki soon work out what is happening and begin communicating with each other, leaving messages on each other’s cellphone. As time goes on, they get the hang of each other’s lives, while developing an inseparable connection with each other. But then one day the body swaps stop and Taki's messages from Mitsuha vanish.
With only sketches drawn from memory to help him locate Mitsuha’s village, Taki sets out to find her - with his co-worker and potential girlfriend, Ms. Okudera (Masami Nagasawa), in tow. But when they do eventually track down the remote village of Itomori, Taki learns a devastating truth about Mitsuha and everyone he has come to know and love in the small, countryside community.
It is hard to know precisely how much of Your Name to reveal, suffice to say that the film’s second half evolves away from the playful humour of its opening hour, tackling some pretty substantial themes, both emotional and conceptual. It is a credit to Shinkai’s story-telling that he manages to introduce ideas as complex as intersecting timelines and heart-breaking natural disasters, while retaining the film’s magically romantic tone throughout.
Shinkai, whose previous celebrated offerings include 5 Centimeters per Second and The Garden of Words, is regularly cited alongside Mamoru Hosada as a worthy heir to Hayao Miyazaki’s title of Japan’s greatest living animator. His work certainly blurs the lines between fantasy and reality with as little effort as Miyazaki did in the likes of My Neighbour Totoro and Spirited Away. Similarly, he tackles themes including humanity’s relationship to nature and the cosmos, questions traditonal gender roles, and explores the volatility of adolescence, a period when everything, however seemingly insignificant, carries almost cataclysmic importance.
Your Name often recalls I Are You, You Am Me, the 1982 body-swap comedy from House director Nobuhiko Obayashi. In both films, the young male protagonist’s first reaction to realising he is in the body of a teenage girl is to play with her/his breasts. Both films also point to a freak occurrence relating to archaic Japanese folklore as the trigger for their bizarre situation. And of course, as we are talking about the antics of hormone-fuelled teens, both inevitably skew towards romance, as they open up to each other in ways none of their classmates ever could.
The film also evokes memories of the 2011 Fukushima Daiichi nuclear disaster, as well as Hiroshima and Nagasaki, albeit through the fictional, some might say magical, filter of an approaching comet. Shinkai forces his characters not only to face tragedy and death at a young age - a narrative device all too prevalent in Japanese fiction - but on a mass scale, with no forewarning. Taki and Mitsuha are kept apart throughout the film, initially by geography, but later by time and mortality itself, an idea Shinkai first explored in 2003's Voices of a Distant Star. But rather than wallow in the tragedy and scramble to find inspiration and encouragement in the ashes, Shinkai gives his characters the opportunity to change their fate and earn themselves a modicum of happiness.
Adapted from Shinkai’s own illustrated novel, which was only published two months before the film’s release, Your Name has proved a monster hit in Japan. Holding the top spot for 11 of its 12 weeks on release (losing out only momentarily to Death Note: Light up the New World), the film’s appeal stretches right across the demographic spectrum, and should even strike a chord with audiences inexperienced with anime beyond the likes of Studio Ghibli and Akira.
Featuring almost photo-real animated renditions of Tokyo and some insanely catchy songs from boyband RADWIMPS (not least "Sparkle"), the film is a wondrous delight from start to finish. Your Name might be the most essential animated event of the year.

Review originally published in November 2016. The film opens in select theaters in Canada and the U.S. on Friday, April 7, via Funimation. Visit their official site for more information.

If you in look for legit web based home business advertising opportunity however sick and tired of on-line scammers in that case this is really what you were searching for. I commenced working on this gig 2 yrs back and making $7000 or plus each and every mnth without difficulty. Start obtaining profit just like me... Take a look at the site >>>>>>>>>>> http://s.id/4vv

That is some slick animation. I've enjoyed all his previous endeavors and I'm sure this one will be no different. Looking forward to it.

Saw it last evening and 100% agree with the review. I've seen Shinkai's other films and always enjoyed his work, but this may be his best yet. From speaking with friends who saw it with me, this has mainstream appeal and both male and female friends (straight and gay) loved it as much as I did if not more so.

I loved how this movie looked, and was pleasantly surprised by how affecting it was emotionally. I wish it had a bigger release on this side of the pond.