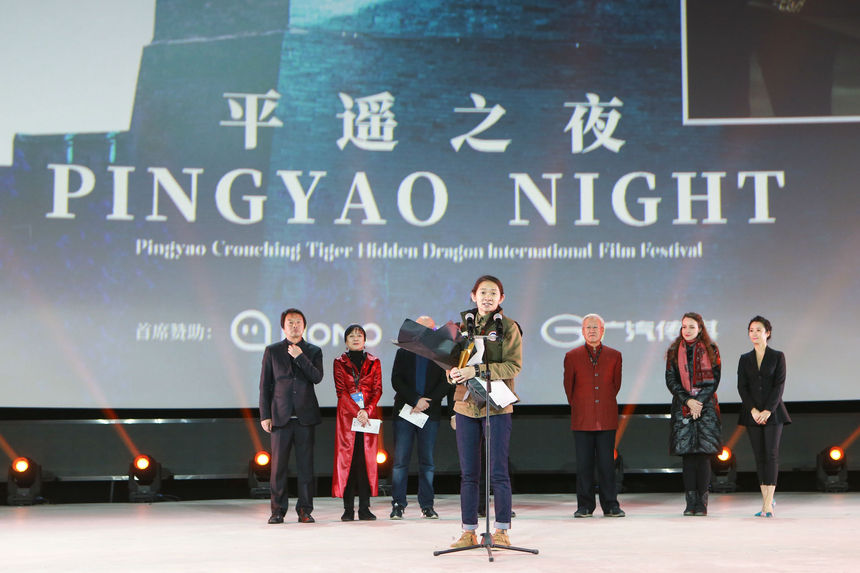 The inaugural edition of the new Chinese festival of independent cinema, Pingyao Crouching Tiger Hidden Dragon International Film Festival 2017 (read the news) under the aegis of its founders Jia Zhangke and Marco Muller, came to a close. The 2017 edition held in the ancient walled city of Pingyao is considered a success with 90% rate of attendance and proved a demand for a cultural event of this sort in historically industrial area.

As the custom goes, Pingyao celebrated films and their directors not only at dark rooms but also on the central stage of Platform, an open air theatre, where opening and closing ceremony took place. Two juries were assembled to spotlight talents, Roberto Rosselini and Fei Mu jury, honoring best film and best director.

Roberto Rosselini jury consisting of Indian director, scriptwriter, composer and producer Vishal Bhardwaj, Chinese writer and scriptwriter Liu Zhenyun, Japanese actress and director Kaori Momoi, Russian director and writer Aleksey German, Jr., French director and cinematographer Arnaud Desplechin and Chinese director and professor Xie Fei handed the Best Film Award coming along 10,000 USD prize for the director´s next film to Elizaveta Stishova´s Russian-Kyrgyzstan-Polish co-production of family road-trip drama Suleiman Mountain. „It’s made [the film] with great enthusiasm and with a real fascination for its incredible two women characters, with deep love for this young boy and all the characters and actors in this film. It’s worthy because of its true depth and emotion and mainly its deep belief in the power of cinema,“ stated the jury before giving away the award.

The 5,000 USD prize and the award for the Best Director went to U.S.-based Chinese filmmaker Chloé Zhao for her award-winning rodeo drama about broken dreams, The Rider (read the review), a reconstruction of a true story by its authentic participants. The jury explained its choice saying „It’s made [the film] with great enthusiasm and with a real fascination for its incredible two women characters, with deep love for this young boy and all the characters and actors in this film. It’s worthy because of its true depth and emotion and mainly its deep belief in the power of cinema“.

The Fei Mu jury was tasked to select the best film and the best director out of the Chinese-language films. Indian director, producer, writer and actor Anurag Kashyap, Chinese writer-director Song Fang, Hong Kongese producer Ivy Ho, Japanese producer Shozo Ichiyama, Chinese painter, editor and film critic Lin Xudong and French journalist, film critic and writer Jean-Michel Frodon honored the director Vivian Qu and her latest thriller revolving around a young victim of a brutal assault in a circle of violence, Angels Wear White. Qu took home also the prize of 30,000 yuans for her next film. The jury appreciated „the subtlety and strength of the directing, for the quality of acting, especially the non-professional actresses, for the intelligence in the way the film does address problems which have a Chinese specificity but are universal, and also for the various promises for a great career to come“.

The award for the Best Director along 30,000 yuans for the winner´s next film landed in the hands of Liu Jian and his animated feature, a Berlinale contender, Have a Nice Day (read the review). Taken from his own realistic experience, this movie has been very inspiring and creative for the language of animation. It has dealt with a very serious topic in a vivid and humanistic way and it is very simple yet strong and subtle and sharp film and it is not only the original animation but also an inspiring script. It opens the horizon for film industry,“ commented the jury.

The public got a chance to display its inclinations in People´s Choice Awards poll where Stishova´s clocked another win with Suleiman Mountain in the section Crouching Tigers, the section Hidden Dragon saw the Italian film L´Ora Legale praised by the audience while the winner in the section Galas ended in a tie with Aida Begic´s children refugee drama Never Leave Me where real-life child refugees reprise their unlucky fate and domestic romantic melodrama spiked with nostalgia for Chinese cinema, Please Remember Me directed by Peng Xiaolian.

People chose ambitious feature debut from Georgia, Scary Mother (read the review) by Ana Urushadze, as their favorite in the sidebar displaying créme de la créme of the festival season while the section rounding up the emerging domestic talent New Generation China got dominated by Peng Fei´s moving snapshot from the rural life combined with coming-of-age, The Taste of Rice Flower. The audience got to decide the best performances, Claes Bang charmed the audience in Ruben Ostlund´s satire The Square (read the review) while actresses Feng Wenjuan and Wen Qi did so in Please Remember Me and Angels Wear White respectively.

Do you feel this content is inappropriate or infringes upon your rights? Click here to report it, or see our DMCA policy.
AwardsPingyaoPingyao 2017Pingyao Crouching Tiger Hidden Dragon International Film Festival