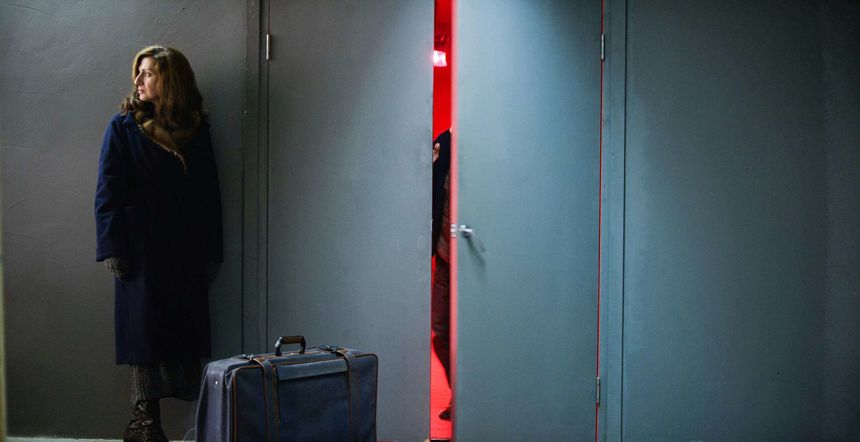 Both films share a similar space, stigmatized by a milieu of a slumbering post-communistic country, a block of towers rendered in brutalist architecture that outlived the regime itself and still stands as a proof of the time past. The bleak atmosphere and cold tone, the staples of Eastern European social realism, reign over the visuals of Scary Mother, as they did in Godless, although the Georgian oeuvre is more of a chamber affair. Furthermore, both films were shot by female filmmakers and revolve around female protagonists.

However, the films differ in topic and form. Where Godless is a full-blown, explicit social critique and indictment of a corrupt system, Scary Mother is constructed as a retracted and dimmed drama. The latter toys more with psychological matters, while not exceeding the threshold of the family unit. Still, both films bear the mark of emerging, resolved and self-confident filmmakers.

Urushadze uncoils the conflict at a slow pace, introducing 50-something Manana, a housewife, who happens to currently have a quirk of writing a novel. Spending time in a room alone echoes Virginia Woolf's 'a room of one's own' attitude, Manana's zeal for storybuilding is respected by all members of her family, who continue carrying out their own daily routines.

The delicately dosed backstory has it that Manana spent her life taking care of the family while neglecting her allegedly one and only passion, and decided to act on the need in a moment of now-or-never. The first signs of inner tension emerge in an ordinary talk between Manana and her husband when she, slightly confused and delusional, reveals to her husband that the new tilling in the bathroom triggered the reverie for her novel.

She soon slips into the skin of an eccentric and misunderstood artist, though she refuses to give up on the book even after her family insists she should return to be a mother and a wife, and stop being a weird and alienating novelist. The rather harsh feedback strikes Manana after she reads passages from her upcoming book, featuring gruesome and sexualized imagery that shocks her husband and children. The black hole of repression has been uncorked and poured over the pages of her "opus magnum," as described by an elderly sales clerk, who poses as her editor.

The general outline might suggest the archetypical story of visionary artist versus misunderstanding of his or her peers. Naturally, Scary Mother can be read this way. Urushadze´s debut can be easily perceived as an oppression by conventions, where the protagonist is forced to retire to an assigned role and dare not transgress its confines. As Ralitza Petrova did on Godless, Urushadze adapts a distinct narrative style, one that involves a formal approach to the story and spatial configuration.

Manana lives in a tower block standing on a gorge accessible by two bridges. Cinematographer Konstantin Esadze amplifies its height, shooting the building from low angles. Subsequently that produces a startling image of an ivory tower, given the protagonist's situation of being a housewife living a comfortable, though frustrating existence, in a golden cage, as it were, in complete isolation in order to write the novel. Interior shots from cramped apartment act as safe yet restricting space, while Manana spends time on the balcony and has visions in a bathroom, doubling as an unlikely oracle.

Due to rising pressure from the family side urging her to abandon the works on not so invented story, the exodus seems imminent and she finds refuge outside the tower, in a less cramped backroom of the stationery shop illuminated by piercing red, the color of flesh and lust, the two ingredients rotating in Manana´s book yielding decadent and almost surrealistic symbolism. Moreover, the acts of flesh and lust take place behind the red room in a backyard further elaborating the dialectics of interior versus exterior shots, imprisonment versus liberation topically brushing shoulders with Jan Speckenbach´s Freedom (read the review) in a bold gesture of deconstructing gender stereotypes of motherhood and conventions relegating to women in society.

As the titular scary mother, Nato Murvanidze portrays her character's inner turmoil as an emotional whirlwind of disorientation, combined with apathy while writing the story. Manana refuses to even entertain the thought of surrendering her effort. On the contrary, she ups the ante by blurring the boundary between fiction and fact, as her life and her storyline inevitably intertwines.

Besides the process of liberalization and emancipation from pre-designed (and anachronistic) social norms, Scary Mother depicts the mental and social metamorphosis as a lucid hallucination of reality being torn into two separate yet parallel universes, the one where Manana is a mother and a wife suffering from (maybe even justified) fear of transforming into a monster, and the other one where she is living without a regard to social codes and mores which soon proves to carry its own downsides.

Scary Mother is a bold debut enveloped in a transfixing style, preserving the ambiguity of borderline derangement. The overall tone results in the film's poetics marrying the rational with irrational, delusional and neurotic tendencies. It's a fever dream translated into the aesthetics of Eastern European social realism.

Do you feel this content is inappropriate or infringes upon your rights? Click here to report it, or see our DMCA policy.
Ana UrushadzebleakdramadreamGeorgiaLocarno 2017Scary Mother