Berlinale 2017 Review: Liu Jian Triumphs With HAVE A NICE DAY

An animated crime thriller from China in which a lot more is going on beneath the surface, directed by Liu Jian. 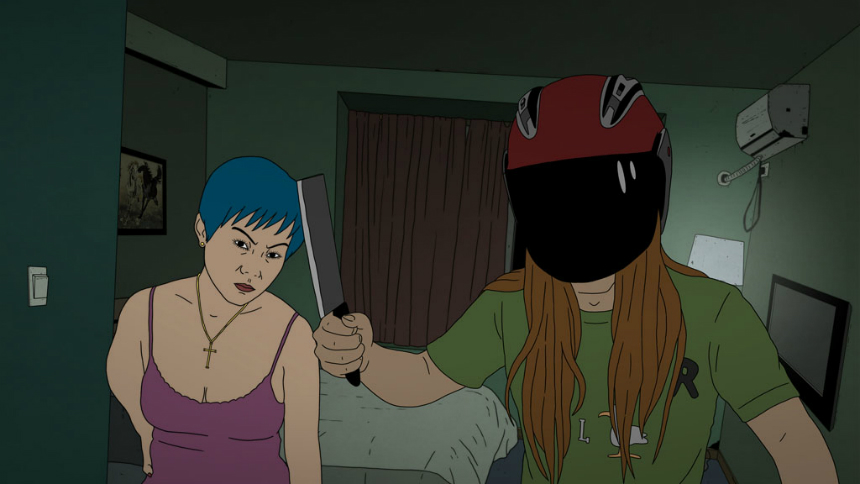 Animated movies for adults are painfully undervalued, both at a festival level and as an art form, but Liu Jian's Have A Nice Day is a title that could smash through those barriers. Certainly one of the more interesting features in Berlinale's Main Competition this year, Have A Nice Day may not have the philosophical depths of something like Richard Linklater's Waking Life, but it's definitely among a small group of animated crime thrillers in which you can tell that a lot more is going on beneath the surface.

Deeply Chinese in terms of its bathetic dark humour and social topics, this intense 75-minute labour of love nevertheless feels deeply (and unsurprisingly) influenced by Western culture. What's more, it also feels as though its perhaps Westernised style of animation might actually be subversive. It's a style that is difficult to pin down, but perhaps it might best be described as always feeling very two-dimensional, looking a bit more like a Chinese take on Mike Judge's and Greg Daniel's King of the Hill than a traditional Manga style.

There's a more advanced depth in the style that Jian and his team of animators create, though. The brightness of characters' clothes and faces are often tonally different from their backgrounds, giving scenes a wonderfully flat and yet at the same time simultaneously deep perspective. This allows characters to move within that space in an awkward, often staggered way, but it also adds a cool additional impression of where light is coming from within scenes. When mixed with a sound design that frequently makes voices or moving characters seem oddly distant or muffled, you get a real feeling that Have A Nice Day's world is weirdly out of joint.

Set against an epigraph of Leo Tolstoy's opening lines to Resurrection -- "Though hundreds of thousands had done their very best to disfigure the small piece of land [...] still spring was spring, even in the town" -- and a credit sequence made up of carefully detailed snapshots of modern urban Chinese life, what you receive early on is an impression of a damaged world full of harsh corruption and unexpected violence. In other words, a smart chase movie that is set in motion when construction worker Xiao Zhang (Zhu Changlong) tries to steal one million yuan from the mob to pay for his girlfriend to have her botched plastic surgery corrected in Korea. 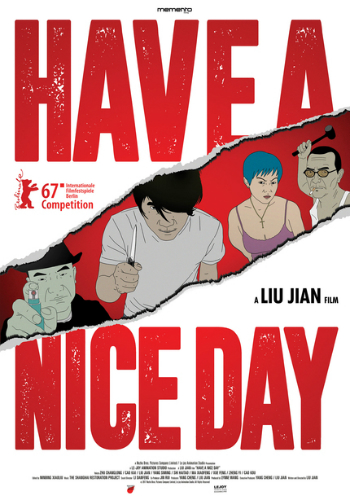 Unfolding a bit like a Quentin Tarantino movie, the animation is broken up into chapters, and at almost every stage every character feels expendable and none of their fates are easily predictable, either. So no sooner has Xiao Zhang set out with his precious McGuffin than he is being duped by a maverick inventor and his wife. Then a no-nonsense, clinical hit man bursts onto the scene and before long, even Zhang's opportunistic relatives are getting involved. By the end, there's a scene in a motel room that's resembles that one in Othello where all of the bodies just end up piled up on a bed.

What makes this film even more wonderfully unpredictable, however, is the fact that the characters don't always necessarily stay dead. The countless resurrections cause you to become almost completely unable to predict where the next power play for the money is going to come from, and it's damn fun! But as the quest for the bright red 100 yuan bills intensifies, you can't help but start to suspect that this film might well be making a pretty sharp dig at modern Chinese culture and the capitalist systems it has effectively embraced.

There seems a particular irony in the way the animators dwell on close up images of Chairman Mao's face on the bright red notes too, as people repeatedly try to kill each to get their hands on the money they need to be happy or successful. Perhaps this all starts to add up, because you slowly begin to make links between what seems to be a critique of modern capitalism, and this animated style which so smartly turns its characters into troubled, dehumanised automatons. In fact, an impressionistic animated style, and its ability to express things in a non-explicit way, is perhaps one of the smartest ways to (potentially) express dissent against the Chinese state yet.

At the same time, the thing which is always so wonderful about the Chinese New Wave is that you can never pin down exactly what their balancing acts are actually trying to say. So whilst I might enterain the above interpretation, it is entirely possible that I am completely misreading or overanalysing Have A Nice Day (and what's more, from a typically Western perspective). After all, depending on how you choose to look at it, the movie could just be an extremely talented and fun homage to the crime thrillers that so many of us have grown up on.

Either way, considering this only his second feature-length project to date and he is currently working on a project titled School Town, Liu Jian is certainly one director to look out for.