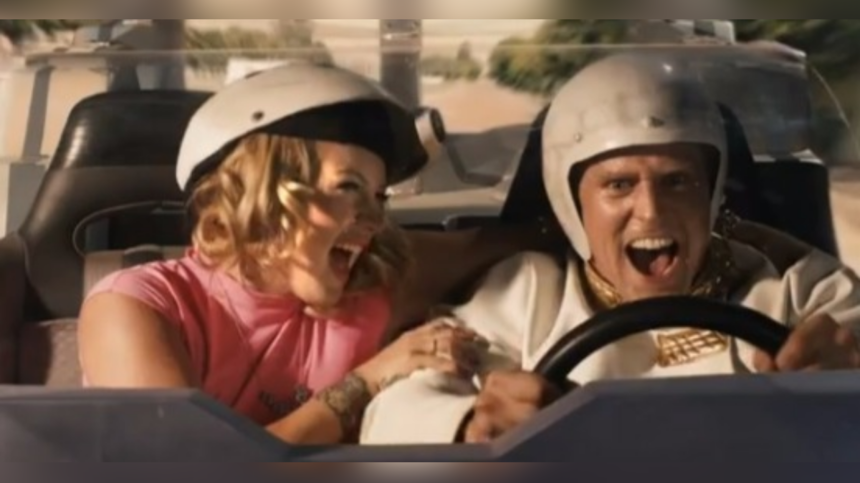 Much like another Roger Corman production I reviewed a couple of months ago —the ever-hilarious and generically-named Ultra Warrior—, Death Race 2050 is an apocalyptic, grim-yet-colourful action movie set in a futuristic United States, but shot in my native Peru. The main difference is that this is no longer talking about 80s cinema. No, Death Race 2050 was released earlier this year, meaning one can expect a little more polish —and a truckload of digital effects— from the movie, instead of mullets and cheesy dubbing.

This doesn’t make the film any less absurd or cheap-looking than Ultra Warrior. Or any less memorable than the original Death Race movie, for that matter. Actually, I found the movie to be quite refreshing, especially when compared to its bigger-budgeted brother, Paul W.S. Anderson’s Death Race, starring Jason Statham. This is a B-movie through and through, full of bad CGI, horrendous acting, hilariously cheap-looking sets, and quite a bit of gore. Forget everything you saw in the Statham flick —Corman and director G.J. Eachternkamp have abandoned Hollywood polish in favour of a ridiculous political satire, mixed with Hunger Games-style costumes, and exploitation to boot.

This insane movie is more of a reboot than a sequel to the original 1975 Death Race. It takes place in a colorful, cynical United States, now called The United Corporations of America (because everyone knows not to look for subtlety in a film like this), and under the control of private companies, instead of politicians. The dictator is played by an over-the-top Malcolm McDowell, sporting a ridiculous wig, and sort-of-parodying current president Donald Trump. Our hero, on the other hand, is current Death Race Champion Frankenstein (Manu Bennett), a leather-clad, muscle-bound and no-nonsense race car driver.

The premise is simple: he must race against such colourful characters as Jed Perfectus (played by Burt Grinstead, the best thing about Carlos Cirulizza’s Sebastian, a Peruvian gay drama), Lesbian rapper Minerva Jefferson (Folake Olowofoyeku), “religious” leader Tammy (Anessa Ramsey) and even an AI-controlled vehicle, earning points by running over pedestrians, and hoping to survive until the finish line. Along the way, there are “proxies” (co-pilots who accompany the racers via VR from their homes), as well as a couple of bizarre TV hosts (who look like the less-stylish cousins of Stanley Tucci and Toby Jones’ characters in The Hunger Games) shouting a play-by-play of the race.

I don’t know if today’s audiences, who prefer their B-movies to take themselves as seriously as possible, will get any enjoyment out of Death Race 2050, but I certainly did. Even though there’s blood and guts everywhere, and the concept couldn’t be any more cynical and exploitative, Eachternkamp shoots his movie like a cartoon: characters are two-dimensional and goofy, death scenes are unbelievable-yet-hilarious, and the “social commentary” isn’t anything more than a couple of jabs at Trump and America’s rampant commercialism (the latter being nothing new, especially in the realm of B-movies). I guess the fact that the flick was shot in Peru —and that most of the extras look like latinos… because they’re Peruvians!— was all part of the “satire”. In any case, it sort of works.

Obviously, being a Peruvian who lives in Lima, I got extra enjoyment out of spotting famous landmarks and local streets throughout the film standing in for post-apocalyptic America. For example, “Old New York” is actually Lima’s downtown, and many race scenes take place at seaside highways near the actual city. Being a low-budget flick, one can actually spot many signs in Spanish in the background, since Corman and company didn’t bother to erase them or replace them with signs in English. Plus, as said before, the majority of extras are clearly Peruvian (and most of the time look hilariously confused), and even a couple of local actors have small parts, all spoken in English with a Peruvian accent, of course.

The acting is awful yet highly entertaining, as per usual. Manu Bennett plays Frankenstein as the perfect badass hero; stoic, strong, yet unexpectedly funny. Marci Miller is pretty much the only one trying to give a realistic and charming performance; it works, especially in contrast to Bennett’s stiffer acting. Folake Olowofoyeku plays Minerva as an insane singer who delights in killing her own fans (her co-pilot, Chi Wapp, is played by local character actor Pierre Paolo Goya Kobashigawa, by the way), and Anessa Ramsey’s Tammy parodies evangelists and religious fanatics (maybe a reference to Tammy Faye Bakker?), acting like an arrogant cult leader capable of mowing down her followers, as long as their deaths give her more points on the race. There’s also a small part played by Sebastian Llosa, Nobel Prize winner Mario Vargas Llosa’s nephew (and now a singer). He doesn’t embarrass himself too much.

The standouts, nevertheless, are Malcolm McDowell and Burt Grinstead. The former is enjoyably slimy and megalomaniacal as a wealth-obsessed, clearly deranged dictator. McDowell knows the kind of movie he’s in, and thus doesn’t miss any opportunity to chew the scenery. The latter is clearly having the time of his life, having just played a more dramatic part in Peruvian bore-fest Sebastian. His Jed Perfectus is a “genetic experiment” obsessed with looks and public perception (he likes to run around in a golden thong, because why not); he’s a sexually-confused man-child who, despite being surrounded by enamoured fangirls and having pretty Eve (local actress Leslie Shaw) as a “proxy”, doesn’t seem to be able to “perform” in bed. (Eve actually has to fake moans during their stay in a hotel, so that their rivals think they’re “getting it on”). Plus, he has all the best lines, such as “When your DNA sleeps… it dreams of me!”, or “I’ll drink your tears, Frankenstein! I’ll lick ‘em off your hands and face!” It’s a hilarious character, and an equally-fun performance.

Despite its source material and Corman’s role as producer, Death Race 2050 is not as exploitative as it could have been. Maybe it’s a sign of the times —America’s never going to make exploitation cinema as great as its 70s heyday—, or maybe it’s the fact that violence is more “acceptable” than nudity and sex nowadays (at least in the States), but I felt the movie could have been a tad more exaggerated. Yes, the kills are laughably bloody and ridiculous (these cars are capable of crushing people to death even when moving at twenty miles per hour, apparently), and there’s cursing aplenty, but the sex aspect is curiously neutered. We got one “butt shot” and a couple of topless extras… and that’s it. Not that sex and nudity would’ve made a better movie out of Death Race 2050, but it’s definitely something that usually comes with the territory.

An aspect in which the film does not disappoint, though, is its cheap look. As expected, Corman tried to save as much money as possible during the making of the movie, which means nothing looks remotely believable or even “cool”. Some of the vehicle designs are mildly interesting, but most of them look like enormous toy cars with pieces of plastic waggling on top of them, making them seem like Mad Max: Fury Road knock-offs. Racing scenes are sped-up, there’s not a single interesting camera movement to be found, and sets couldn’t be any more claustrophobic or boring. Cinematographer Juan Duran has done a great job with Peruvian productions such as thriller The Light on the Hill, but clearly didn’t have enough resources on hand to make it look any good.

Unlike other Corman productions, Death Race 2050 doesn’t use much stock footage (although one particular scene does feature a couple of images from Shutterstock… so I guess that counts), preferring to combine cheap CGI, copious amounts of green screen, and Halloween costumes to create a vast and impossibly horrific future, populated by dimwits and sadists and violent terrorists. The latter play a small (and gratuitous) part in the plot, although they do manage to sneak in a couple of ninjas for a badly-choreographed fight scene with Bennett… so there’s that.

Death Race 2050 is everything one should expect from a Roger Corman production, especially if one considers his sixty year-long career. It could’ve been a little more exploitative and over-the-top, but for what it’s worth, it’s got enough blood, guts, simplistic political commentary, scenery chewing (McDowell and Grinstead are especially wonderful) and terrible special effects for it to become a cult classic. Yes, it’s all incredibly stupid and shoddily-made, but also pretty loony and funny. Fans of low-budget extravaganzas should have a crazy-good time with this kitschy, oddball flick.