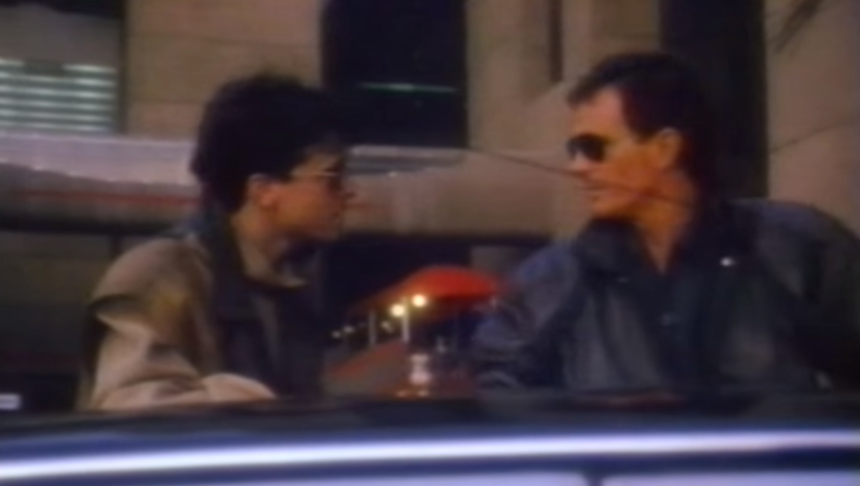 Once upon a time, Peru was the Mecca for some international film production companies that wanted to shoot their films in our supposedly “exotic” locations. During the late 80s and early 90s, that honor belonged to legendary schlock producer Roger Corman who, coincidentally, returned to my home country last year to shoot his latest —and probably bloodiest and corniest— Death Race movie. But that’s a story for another time.

Ultra Warrior is the movie I’m focusing on this time. Starring awesomely-named Dack Rambo (who sadly passed away from AIDS in 1994), Clare Beresford, and a significant number of well-known Peruvian actors (well, at least they’re famous to us Peruvians) such as Orlando Sacha, Ramon Garcia (fans of Paolo Sorrentino’s The Young Pope might be familiar with him), Diego Bertie, Carlos Cano (a great actor who unfortunately passed away a couple of years ago) and David Killbery (who’s actually a friend’s dad), the film takes place after a nuclear holocaust in a godforsaken, barren and  only slightly futuristic planet Earth.

Rambo portrays Kenner, a bored-looking action “hero” who’s recruited to aid a group of rebels in their fight against an awesome villain called The Bishop, (Sacha), and his followers. And that’s pretty much it. The film plays like a mix between George Miller’s The Road Warrior and countless other sci-fi B-movies, looking much cheaper than the former, and being less fun than most of the latter. And even if it still feels a little too familiar, there’s a very good reason for that.

Many cinephiles know B-movie directors love to use stock footage to make their stories feel “bigger” and more “epic”. Most of the time this footage comes from movies with larger budgets, but in the case of Ultra Warrior, Corman and friends had no such luck. As a result, the film makes use of scenes from other Corman productions and low-budget apocalyptic movies, such as Battle Beyond the Stars, Wheels of Fire, The Warrior and the Sorceress, Lords of the Deep, and  probably many more. In fact, the movie’s first fifteen minutes or so (which serve as a sort of introduction to this particular future) are 80% stock footage, of varying degrees of quality. This makes Ultra Warrior feel particularly bland and generic.

And generic it is. The plot is nothing to write home about —it’s full of holes, a by-product of the pastiche-like nature of both the script and the overall production—, dialogue is laughable, and the acting, well, it’s everything one could expect from a movie of this sort. It’s a film made in post-production, a story that was developed only because Corman and company wanted to, not because they should, or even because they could. They clearly shot as little as possible, which makes the decision of filming in Peru all the more questionable. (Wasn’t it cheaper to film in the States, or even in Canada?)

But that particular decision, at least, makes Ultra Warrior a much more enjoyable experience for a Peruvian audience. Seeing the veteran Sacha portraying an over-the-top bad guy, clearly dubbed by an American actor, wearing a ridiculous Mandrake-the-Magician-looking costume and using some sort of magic power to “battle” Rambo’s Kenner during their final confrontation, is simply sublime. The same goes for Bertie and a mohawked Garcia; the latter plays a “badass” henchman, who’s especially memorable during a fight scene in some kind of abandoned warehouse. (Spoiler: he dies. Hilariously). I know American audiences won’t get anything from their appearances, but for a Peruvian like me, it’s a plus.

It’s also fun to recognize some of the shooting locations. Our Ministry of Culture/National Museum building plays a pretty important part in the story, as well as the deserts near Lima, which make for a pretty convincing post-apocalyptic Earth. In any case, it doesn’t really look like a movie shot in Peru, which I guess was the idea all along.

Fun fact: Ultra Warrior was directed by one of Peru’s most prolific and famous filmmakers, Augusto Tamayo San Roman; it’s not something you talk about in front of him (I took a couple of classes he taught in college and never dared to bring up the subject). He’s responsible for local historical dramas like El bien esquivo or La sombra al frente; why (or how) he ended up in charge of this thing is anyone’s guess. Film editor Kevin Tent was called in to shoot additional scenes after Tamayo finished principal photography, though, which further explains the scattershot nature of the movie’s editing and overall feel.

Aside from the aforementioned actors, the hilariously terrible dubbing (particularly awful if, like me, you’ve grown watching these performers act in Spanish), and the ridiculous use of stock footage, there’s not much else worth mentioning about Ultra Warrior. Like most B-movies, it’s terribly edited (what’s with the awkward cuts between scenes?), it’s full of continuity errors, and the special effects are anything but. Corman clearly wanted to save as much money as possible with this production, probably even more than usual. And it’s very noticeable.

Ultra Warrior delivers what one could reasonably expect from a sci-fi, low-budget Roger Corman production, with a heaping helping of stock footage: laughable dialogue, terrible special effects, cheesy acting (and worse ADR) and an incomprehensible story. It’s great fun, though, if you like watching these kinds of movies, and especially if you’re a Peruvian like me, capable of recognizing most of the supporting actors and the filming locations. It’s not Roger Corman’s worst fare, and it definitely pumped me up enough to watch the Death Race sequel he filmed around Lima last year. At least it won’t be using as much stolen scenes as this movie…

A mix between George Miller’s The Road Warrior and countless other sci-fi B-movies, with a heaping helping of stock footage.
Tweet Post Submit