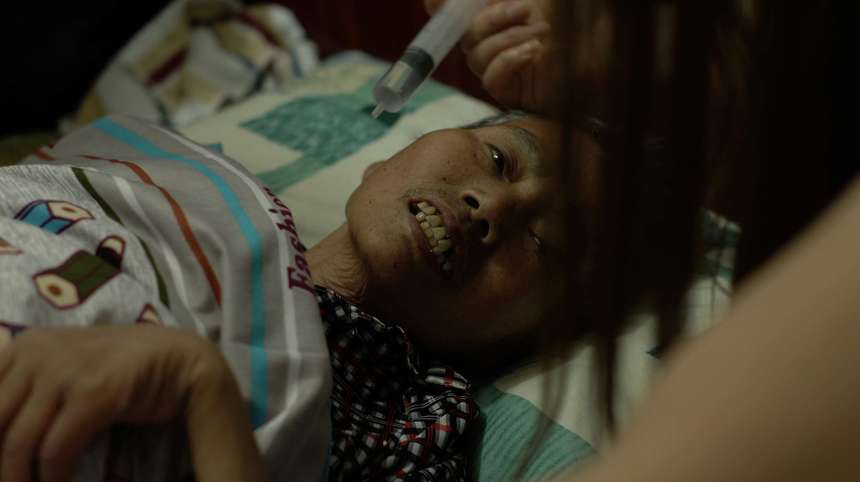 The prominent and leading Chinese documentarian and artist Wang Bing triumphed at the auteur-driven Swiss festival, netting the top honor for his latest film, Mrs. Fang.

Bing became notorious for the epic length of his documentaries -- West of Tracks runs 551 minutes, ‘Til Madness Do Us Part only modest 227 minutes -- and as an observer of the current China, exercising an unflinching scrutiny.

Such is the case of Fang Xiuying, who suffered from Alzheimer's disease for the last eight years of her life. The filmmaker visited her in 2015, when she was still active and walking around her humble dwelling, and returned in 2016 to find her in a vegetative state, bedridden and unable to communicate with anybody.

After the brief shots of the strolling protagonist, Bing cuts immediately to the bedridden Mrs. Fang encircled with several family members, not offering any other formal introduction. Snippets from her life are revealed as the family members engage in casual discussions near her bed throughout the film.

Such a constitution makes it clear that the film is not going to be about her life as it is about its denouement. The depersonalized approach, despite the most intimate encounter one could ever experience, makes death into almost an abstract concept. In this case, it is a painful and literal concept.

The choice to capture the last days of a dying person bears many hazards, although Bing´s presence does not reach the point of intrusion; his working methods are non-invasive and what´s more important, non-exploitative. It seems like a close relationship developed between Wang Bing (the camera) and Mrs. Fang´s family; the family not only tolerates the presence of the all-capturing eye, but carry on in their routine proceedings, as if there is not an alien element present.

Despite a few glances directly into the lens, acknowledging the director's proximity, and even a rare inquiry addressed to the filmmaker, the gathered close ones don't seem to be bothered by the recording device. Quite the contrary, they seem to understand the importance of its presence and moreover, Bing's intention.

The independent Chinese filmmaker's signature and unique style is that of an epic chronicler of the mundane. He demonstrates this style in his latest offering as well. He counter-balances the agony of Mrs. Wang with images of the relatives fishing, a dull and unsubstantial activity in the light of the dominating topic. However, it's an irremissible fragment for Bing's mosaics of ordinary life and a memento of the continuity of life with all its pettiness, even in the face of one's passing.

Bing's presence does not violate the sacredness and mundanity of the situation and the moment; he is the silent and patient witness in the bare-bone essence of the tradition of cinéma verité. The filmmaker does not interact, direct, nor gather the-talking-head testimonies or opinions.

He simply observes, turning the whole act of shooting and then viewing into a contemplation, not only on the subject of life's expiration. The style corresponds to the given situation of how undramatic and mundane the process of the resignation of biological function is, no trace of a spectacle in it. Yet Bing´s solemn filmmaking dignifies the ordeal into one producing a sublime awe.

Regardless of the situation, the director avoids any traces of morbidity. Even as the relatives deliberate on funeral details, the tone remains casual and mundane, consistent with same tone and vein of the whole film. Only occasionally, as the situation enables, does Bing insert slightly different, deep and powerful images, such as Mrs. Fang in a truly ambiguous state where the line between sleep and being dead blurs. (In her state of steep decline, she sleeps with her eyes open.)

Exceptionally memorable is the closeup in which a tiny tear makes a slow dive on Mrs. Fang´s cheek, another opaque moment when it is unclear if the secretion stems from last remnants of the ghost looming in the machine or whether it is an involuntary by-product of the decline. No matter what, the uneasy portrait upholds dignity and illustrates sensitivity.

The filmmaker is notorious for his penchant for simple stories and that seems to be the narrative blueprint for all his films. Mrs. Fang remains simple and pure throughout. In addition, a running leitmotif of family that is on par with the central topic emerges.

The family's presence around the patient prevails as a testament of loyalty and commitment to take care of their relative -- the children quit their jobs in order to tend to their mother -- while during close-ups, they remain acknowledged via sound track off the frame. In his films, Bing has noted the rise of broken families and a lack of places that natives could call home as one of the main shifts in Chinese society.

From this perspective, Mrs. Fang expands Bing's topical framework, ranking among his previous family films Three Sisters and Fathers and Sons. The director introduces yet another invaluable volume into the annals of contemporary Chinese society, notwhistanding the great matter of death grasped with dignity, albeit without compromising its importance.