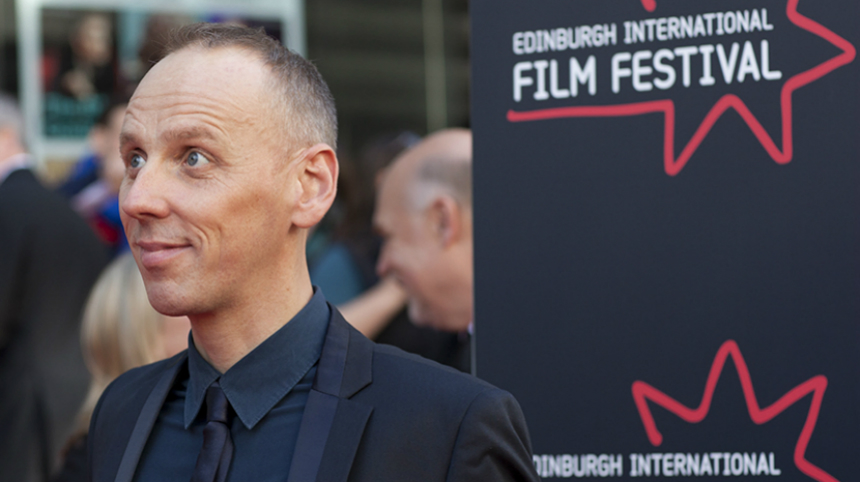 It was on Edinburgh’s Princes Street that most people got their first look at actor Ewen Bremner.

In the role of loveable addict Spud, he was sighted running down the famous shopping street with best pal Renton in tow, stolen gear falling by the wayside and security guards hot on their heels as Iggy Pop’s "Lust for Life" soundtracked the chase. That was over 20 years ago, and the film, Trainspotting, has since proven to be one of the most definitive British films of the past few decades.

Bremner is back on Princes Street today, making an appearance for the Edinburgh International Film Festival in what’s shaping up to be one of the most exciting years in a long and colourful acting career. After the old gang got back together for T2 Trainspotting, providing a modern update on the themes tackled by the iconic original, Wonder Woman arrived to push the superhero genre in a positive new direction.

Sitting down with the actor in a hotel overlooking the scene of his iconic dash, we discuss the films that have made up an eventful year.

ScreenAnarchy: It’s been a massive year for you with T2 and WONDER WOMAN…

Ewen Bremner: Yeah, it’s been a really full on time, it’s great. I mean it’s the ideal situation you want to be in as an actor, you want to be occupied with work that you can enjoy and in both of those cases I’ve certainly had that.

Alongside that I’ve also been shooting this television series for TNT about the young William Shakespeare (Will) where I got to play this fantastic character that is basically the evilest man in England. This dangerously zealous protestant spymaster for Queen Elizabeth, who’s a master of torture and does absolutely despicable things to anybody he comes across in every episode. So it's a wonderful variety of stuff that I’ve got to do.

In terms of environment, you’ve worked on big Hollywood productions in the past like BLACK HAWK DOWN and PEARL HARBOR, but joining the DC Universe and becoming part of these new mega, multipart franchises, was it a different experience?

It was kind of a novelty to become part of a superhero movie because when my agent was talking about it I didn’t really believe they would want me in a superhero film, and not on the good guy side. Typically those are for really well built, good teeth and hair types, turning up to save the world.

So I think it’s wonderful that Patty Jenkins made this band of compadres that are almost the least likely group of people you would pick to go on a mission to save the world. But they turned out to be just the right combination of people to give her the support she needs to get her where she needs to go.

So, for me it was kind of a novelty to start to work in that universe, but you know any film is this kind of marriage of chaos and order that is kind of dizzying and nauseating and you have to surf it like a choppy sea, you’re just on a surfboard trying to stay upright. 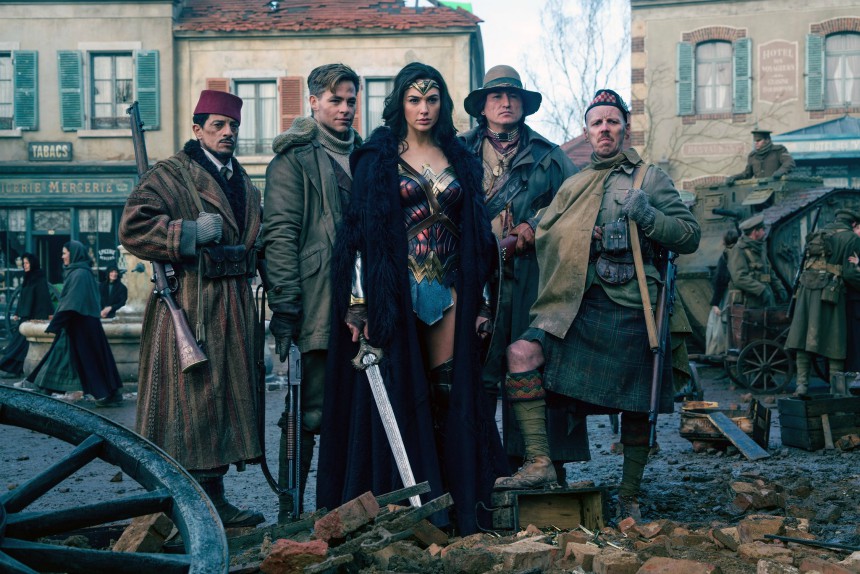 As a native Scot did you have any kind of input on your character Charlie’s dialogue after receiving the script?

Totally, Patty was so open to all kinds of input on that. Her hands were a little bit tied with certain things that we did shoot that we had to re-voice afterwards that American audiences weren’t understanding. A few phrases that we used in there that were like, really proper Scottish phrases we had to make it acceptable and understandable for an American audience.

So you were actually dialing down the Scottish lingo?

Yeah, a little bit. She was really great and let me do what ever I wanted with the dialogue, she really trusted the team she had around her and the actors she recruited and gave us license with the text to adapt it as we felt suited it best.

And, you know she makes a film, they have their note sessions feedback from different testing groups and studio testers and they say, “We love this, but we don’t understand that”, “What the hell is a such-and-such”, and then post production tidy up a few things, then you go in and rerecord certain bits of dialogue to make it more comprehensible.

There was an incredible amount of pressure on the film after the stuttering start of the DC universe and the pressure on the first female-led superhero film. How did you feel about that, and its reception after?

All I can say about making movies is that anybody who’s ever made a movie is just trying to do their best, they’re trying to make a good film and when I’m going to work on a film or television show I just want to do a good job, I just want to do my best, everybody wants to give it their best, the directors do the producers do, they want it to speak to people, they want it to communicate to people. Nobody’s trying to disappoint anybody, everybody’s putting in maximum effort and spending the maximum amount of dollars they can possibly afford to make the film reach as far as possible.

And so I always make that effort and the people I’m working with are making that effort just as hard. But you never know if a film’s going to hit the sweet spot and communicate to people. You just have that ambition to make that effort and it’s all you can do. Whether people buy a ticket for it on opening night and opening weekend is completely out of your control.

You can have the best marketing campaign and a really good film but if it doesn't click with people who are like “I want to see that this weekend” the film is dead. But then there’s films that come back because there’s all kinds of distribution, digital and online so there’s films that I’ve done that have disappeared from the cinema or never appeared in the cinema, that years or decades later people will be like, "OH MY GOD THAT FILM IS JUST… It blew my mind.”

On that note, I’ve just come from an OKJA screening. You were fantastic in SNOWPIERCER, it was a great role and a great film but then with the distribution problems it didn't get the release it deserved. OKJA seems like it could be the Bong Joon-ho film that could cross over internationally in a way that perhaps SNOWPIERCER should have.

Look, I feel like however a film can communicate with people, by whatever means necessary you know, the more outreach a film has the more access people have to cinema and the effort to communicate an idea the better. I don’t feel there’s any bad means of distribution.

I’m not wild on people taking stuff for free, I know how much effort goes into making something, how painstaking it is, how many hundreds of man hours and people, and talent, and care, goes into making something whether it’s deemed good or bad, I don't like people just taking stuff off a site, I don't think that's cool but that's still how a lot of people end up seeing and enjoying stuff.

As long as cinema is something that's sustainable, and constantly evolving, people are always finding new ways to communicate the same idea, over and over. There’s great filmmakers basically making the same film over and over but they’re great because they find different ways to enjoy that story and to share that story.

I agree with you about Snowpiercer. I was so disappointed it didn't get a UK release, it was so celebrated everywhere else it came out. It’s a great film and director Bong is really a master. I look forward to seeing Okja.

So T2 TRAINSPOTTING, when you made the original did you have an idea of where Spud would end up?

No, but kind of in the gutter, that’s where Diane finds him in the original film. That's not the end of his story in that film, but he’s somebody who doesn't really have a lot of options or horizons and I think it’s fairly realistic that if he’s still hanging on there 20 years later, that it’s not been an easy 20 years.

Did anything surprise you when you read the script?

None of us were expecting that we would be getting back together after 20 years to continue the same story, that’s kind of a surreal dream.

Danny’s quoted the cast as threatening,  “This better be good, Danny” before the film's premiere. I think that shows how much you and the other guys were concerned about the legacy of the original, so… did Danny do good?

Yeah, yeah, I think he really went beyond himself and delivered something more important than even the first film in terms of what he’s saying. He’s got more to say and it says more about life in a way.

So, Renton updates his classic ‘Choose Life’ speech in the film, I wondered if I could get get your views on these updates? “Choose Facebook, Twitter, Instagram and hope that somebody somewhere cares”

Personally I stay away from social media because I don't like that idea of a public conversation, I love talking about stuff but on a one-to-one. I don't like to broadcast, for one thing who cares what I think?

I think Facebook is todays 'Hello' magazine, or 'OK Weekly' it’s just a DIY, do-it-yourself version, and I thought those publications were tacky as shit anyway, so to me that sort of stuff just plays to your ego to your desire to be exposed, envied and adored. I don't have time for that, it would swallow up my life.

“Choose old flames and wish you had done it all differently.”

You do the best you can in the circumstances and try to learn form mistakes, all relationships... hopefully something can be salvaged and learned from them on some level.

Do you feel this content is inappropriate or infringes upon your rights? Click here to report it, or see our DMCA policy.
Edinburgh 2017Edinburgh Film FestivalEwen Bremner