70s Rewind: In THE OMEGA MAN, Charlton Heston Tries to Save the Planet 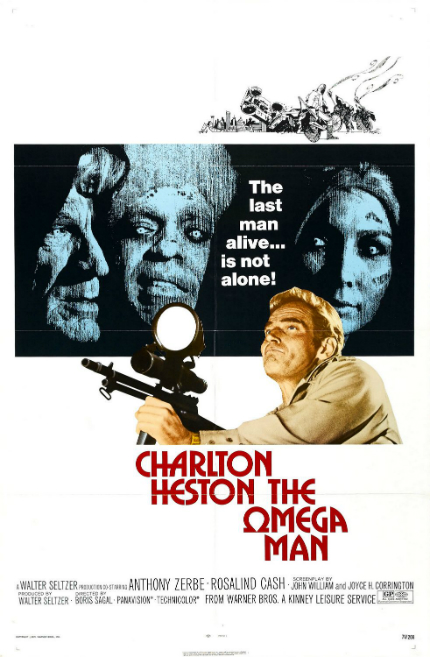 Nearly 50 years ago, Charlton Heston represented the modern human race in the original Planet of the Apes. His character was unquestionably the alpha male among his own kind, who were enslaved and unable to speak for themselves, but the mastery of the apes was absolute and the poor guy had to flee for his life to gain his freedom, only to learn ... well, we know what he learned at the end of the movie.

By that point of his career, Heston was well-established in Hollywood. He had begun landing key roles in his late 20s; he was 33 when he starred as Moses in The Ten Commandments (1956) and 36 when he embodied Ben-Hur. His Academy Award-winning performance set him up nicely for the 1960s. He became a box office star and was able to exercise a fair degree of creative control, as he recounts in his autobiography In the Arena.

In 1968, Heston made his first science-fiction picture, Planet of the Apes. He says he told director Franklin Schaffner: "I smelled a hit in this from the beginning, but I think maybe we also made a very good movie." (Heston was always very happy to claim credit on his successful films.) Appearing in the first sequel, Beneath the Planet of the Apes, only reluctantly, Heston says he 'talked the director into letting me detonate an atom bomb in the last scene, presumably wiping out both the ape civilization and any further sequels.'

Sometime after those experiences, Heston says that he "stumbled across" I Am Legend, a short novel by Richard Matheson -- his first -- that was originally published in 1954. The novel, which I recently read again, tells of an apocalypse from the perspective of Robert Neville, a scientist who believes he is the sole survivor of a worldwide pandemic.

It is slowly revealed that the disease resembles vampirism. Neville suffers the tragedy of losing his dear young daughter, and then must kill his beloved wife after she succumbs to the disease and shortly thereafter rises from the dead. He is haunted by the calamity that he alone has survived; he feels compelled to search out vampires by day and kill them permanently.

The novel is a poignant journey through everlasting grief. Ten years later, it was adapted into The Last Man on Earth in Italy, starring Vincent Price as Neville. Matheson, by that time a veteran of film and television scripting, wrote the screenplay, but it was later revised and changed so much that he used the pseudonym of Logan Swanson for his cowriting credit. Price is quite effective in the lead role and provides the best reason to watch the film, which unaccountably slows down in its second half and drags out the narrative, despite running only 86 minutes.

George A. Romero took direct inspiration from Matheson's novel for his own Night of the Living Dead. And then Heston "stumbled across" it and worked with producer Walter Seltzer to bring it to the big screen.

Heston pats himself on the back for coming up with a "different approach to the script" (along with Seltzer) by identifying the source of the apocalypse as a bacteriological war started by the Chinese. Cowriter Joyce Corrington claims credit herself, saying in a 2003 interview included on the Blu-ray: "It was all about vampires, and it just didn't feel right to do vampires. I have a PhD in Chemistry ... and germ warfare was on my mind as something that could wipe out mankind, so we used that instead of vampires."

But did any of them actually read Matheson's novel? He clearly identifies a disease as the reason for the apocalypse, so he deserves the credit for that idea. Instead, Heston and the Corringtons focused on removing nearly any suggestion that the victims in any way resembled vampires. They also stamped out any hints that, in his increasingly blinkered and isolated existence, and desire to rid the world of the infected, Neville had been committing genocide, preempting any possibility that someone other than himself might ever survive.

It's a chilling thought, namely, that in trying to preserve what was left of humanity, Neville was, in fact, destroying it. In Neville's own mind, diseased not by a virus but by isolated loneliness, he was doing what was necessary.

None of that is preserved in The Omega Man. What the film establishes is that Neville is a righteous gunsmith; the opening sequence features Neville, a former soldier, careening through the empty streets of Los Angeles in a large convertible, stopping only to fire his automatic weapon blindly at distant figures he sees in an office building.

Neville stops at a movie theater to fire up Michael Wadleigh's documentary Woodstock so he can watch it for the umpteenth time. Clearly, irony is intended as Neville has memorized a key passage, but as he steps back outdoors, he realizes it is nearly dark. He races home to his house on the studio backlot, where he encounters ghastly figures who have been disfigured by the bacteriological war and who are intent on killing him.

The essential element that the survivors are sensitive to light -- hey, just like vampires! -- allows Neville to prowl the city by day, searching carefully for them so he can kill them all. It also forces him to barricade himself into his multi-story house at night, since they are constantly seeking him out to destroy him because he is a member of the military-industrial complex, and thus a reminder of what once was.

Thus, Neville is shown to be a very righteous dude, chased after by the hippie rabble -- hey, just like Woodstock! -- even though all he wants to do is find a cure. Neville is hip to the cause, though; he is sufficiently open-minded that when he stumbles across a healthy survivor, an African-American woman named Lisa (Rosalind Cash), he is willing to cross racial boundaries to romance her, quite a surprising thought in 1971, the year of the film's release. (Joyce Corrington says that was her idea too, as a means of creating conflict and a little "racial pizazz.")

Neville is immune to the virus, so he comes to realize that adding components of his blood to a serum he's cooked up in his home laboratory can actually heal people. In his autobiography, Heston writes: "The analogy to Christ as Savior is inescapable, though there's no such reference in the script, and we didn't plan the shoot in those terms. Still, there were irresistible spins I added in performance." The one thing he notes specifically is the final scene, which I'll avoid spoiling.

By that point, though, The Omega Man has fallen victim to the same traps as the first version, slowing down its narrative drive just when it should be speeding up its intensity. There is much more traditional action, but the shots get more leisurely, somehow, even as Heston and/or his stunt double races a motorcycle away from the diseased survivors. The film clocks in at 98 minutes, though it feels longer.

I've seen the film several times, but my original affection for it has diminished over the years. On Blu-ray, its limitations become more obvious.

Director Boris Sagal began his career in the live television era of the 1950s and started directing features in the 1960s. Evidently he was a competent journeyman, but it's difficult to shake the notion that he shot The Omega Man like a TV movie, even with the presence of Russell Metty, an Academy Award-winning cinematographer for Spartacus.

When theatrically released in August 1971, the film did well, in view of its presumably modest budget, earning nearly $9 million at the box office. Heston described it as "a large hit in the theaters. It was high bloody time; of the four films I'd made in the previous two years, none had been huge at the box office."

Cash, who made his big-screen debut in Klute, went on to appear in The New Centurions, Hickey & Boggs, The All-American Boy, and Uptown Saturday Night, all notable and all released within three years. She continued active, mostly in television, until her death in 1995.

Likewise, director Sagal continued busy, almost entirely in television, until his death in 1981. Writers John William Corrington and Joyce Hooper Corrington later collaborated on the screenplay for Battle for the Planet of the Apes, based on a story by Paul Dehn, which features radiation-scarred human who kinda resemble the ones in The Omega Man. They also scripted Martin Scorsese's Boxcar Bertha and Steve Carver's The Arena before turning to television.

The Omega Man is no Planet of the Apes, but the contrast between Richard Matheson's novel and this film version is certainly instructive. And, despite my reservations, Heston's supremely confident screen persona remains fascinating, if not always compelling, to watch.

70s Rewind is a column on movies released during the writer's favorite decade for filmmaking.

Do you feel this content is inappropriate or infringes upon your rights? Click here to report it, or see our DMCA policy.
70s RewindBoris SagalCharlton HestonI Am LegendRichard HestonRosalind CashThe Last Man on Earth

In the original novel, the protagonist realizes by the end that he has become the monster, a demon figure used to scare children. It was a nice twist, but I don't remember if Omega Man ended that way. It would seem out-of-character for someone like Charlton Heston, who was careful of his image.

*** MAJOR SPOILER *** Yes, exactly; in the novel, at the very end, Neville accepts that he's getting what he deserves. THE OMEGA MAN makes Neville a completely heroic figure who gives his life to save mankind. And, yes, as you say, Heston was careful of his image, and so we have him hinting at being like Christ in his death pose.

It's a pity no one has adapted the novel more directly, vampires and all. It's a simple story, very visual and moody, scary in places, funny in places, intelligent without being snobbish and quite adaptable with the vampire element intact (in fact the irony of a character who is a sceptic and atheist surrounded by what are supposed to be creatures of myth and superstition that shy away from crucifixes, and his drive to understand and overcome his predicament is a major point of the story).

Thank you for your comments; I agree with you on all counts. The novel holds up better than the movies.

Omega Man gets off to such a good start, but then suddenly gets really, really bad. I blame the hippies. For everything.