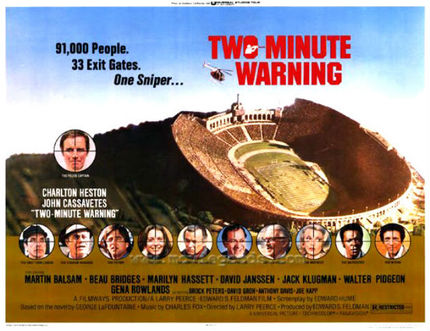 Snipers entered the public conciousness in the U.S. on August 1, 1966, when Charles Whitman shot dozens of people from a tower located on the University of Texas campus in Austin, Texas. Whitman's shooting spree claimed the lives of 14; earlier, he had killed his wife and mother in their homes. The mass murder was unprecedented in American history, and Whitman's motives remain unexplained. *

Two years later, Peter Bogdanovich borrowed that story as the basis for Targets, in which a sniper on an oil tank in Los Angeles first shoots motorists driving on a nearby freeway, then flees to a drive-in theater, where he resumes his deadly attack. Nearly seven years later, in 1975, George LaFountaine's novel Two-Minute Warning appears to have been published for the first time, depicting a sniper attack at the Super Bowl.

The film version followed in November 1976. Produced by Edward S. Feldman and directed by Larry Peerce, who had previously teamed up for the 1975 melodrama The Other Side of the Mountain, the film fit firmly into the "disaster movie" formula that distributor Universal Pictures had perfected, beginning with 1970's Airport, and followed by Earthquake and Airport 1975 in 1974 and The Hindenburg in 1975. (Meanwhile, producer Irwin Allen and 20th Century Fox were making millions from The Poseidon Adventure and The Towering Inferno.) 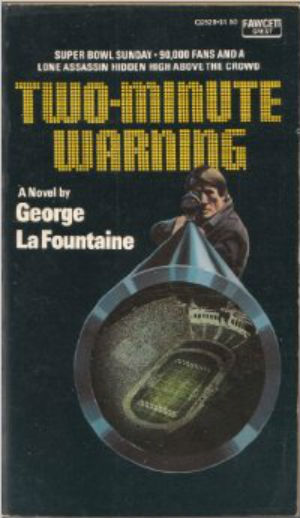 The formula dictated an all-star cast and a slow-developing disaster of some sort, whether caused by natural (tidal wave, earthquake, fire) or human forces (mad bomber, mad sniper); the time before the disaster begins was reserved for character interactions. Evidently, the thinking was that audiences needed to have a rooting interest in the survival of the individual members of the all-star cast, thus building suspense: who will live? Who will die?

Screenwriter Edward Hume, a television veteran, adapted LaFountaine's novel and hewed closely to the formula. Charlton Heston (as a police captain) and John Cassavetes (as a SWAT team leader) lead the cast; supposedly they're in conflict over their methods, with the avowedly 'peace-seeking' police captain at odds with the SWAT team leader's 'bullet-happy' inclinations. The supporting players line up dutifully: Martin Balsam as the stadium manager; Jack Klugman as a gambler in heavy debt to the Mob; Mitchell Ryan as a priest; Beau Bridges as an unemployed father treating his wife and kids to the big game; David Janssen and Gena Rowlands as a couple at a turning point in their relationship; Walter Pidgeon as a pickpocket; David Groh as a guy who flirts with Marilyn Hassett, who just happens to be sitting next to him.

The action takes place almost entirely at the Los Angeles Coliseum during "Championship X," which stood in for the Super Bowl due to the National Football League declining to participate or license their properties. (The teams are identified as Baltimore and Los Angeles; footage was shot during a college football game between the Stanford Cardinals and USC Trojans.) The sniper is shown getting into position atop a tower above the scoreboard, so the suspense depends upon his eventual discovery -- which seems to take forever, just because the movie needs to be a certain length -- and subsequent police efforts to neutralize him.

Very early in the film, an unnerving sequence establishes the deadly intentions of the sniper, as he picks out a target seemingly at random. It's presented in part from the sniper's point of view, through the sights of a rifle, and it's a perspective to which director Peerce returns throughout the movie. The first-person point of view, of course, has become numbingly familiar from countless video games, but seeing it here, in a real-world environment, is still disturbing. 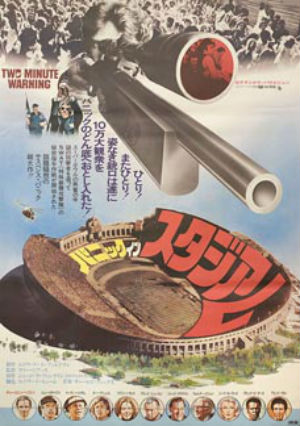 After the conclusion of that sequence, however, the suspense slowly ebbs away. The long delay in the action is entirely artificial, since the shooter's motivations -- and indeed, his intended target(s), if any -- are not revealed. (Later, NBC balked at airing a movie on television revolving around a homicidal sniper, so Universal shot some 40 minutes of new footage that explained the shooting as a diversion from a diamond heist.)

Once the action finally begins, all hell breaks loose, and the "disaster" is one that is frightening because of its all-too-human elements, capturing the reaction of individuals in sheer panic. And, perhaps because I had recently read a detailed account of the Charles Whitman shooting, the similarities made me tense up beyond even what is depicted on-screen.

Less than six months later, John Frankenheimer's Black Sunday upped the stakes, placing an attack on the Super Bowl within the realm of terrorism, and making a blimp the weapon of mass destruction, rather than a lone guman's rifle. (For more on that movie, please see my 70s Rewind from September 2012.)

Although it's certainly not a classic waiting to be discovered, Two-Minute Warning provides a good 20 minutes of well-staged mayhem, and its visual snapshot of Los Angeles, albeit narrow, is worth visiting for history buffs.

In 1965, a teen sniper opened fire on passing motorists in California, killing three and wounding 10 before committing suicide, but it does not appear that it elicited the kind of national publicity that attended the Whitman shooting a year later.

Two-Minute Warning is available on Region 1 DVD. It is also available to watch via Amazon's Instant video on demand service for rental or purchase. I rented the high-definition version, which looked to have been sourced from well-preserved materials.

70s Rewind is a column on movies released during the writer's favorite decade for filmmaking.

Great to see this come back! More '70s Rewind!

This was my very first R-rated movie. I was 15, lied about my age and lied to my parents as to which of the two (!) movies at the theater I was going to see. That extra footage was silly and looked cheap when I saw it on TV.

Thanks for sharing. Did you like the movie when you first saw it? I have to admit, I'm even more curious about that TV footage now!

I thought was quite bloody (pre-Halloween, etc.). But I did not really understand why he was just shooting random people. Only later, reading your post and some similar writings, did I get how that could be possible as the watchtower shootings was a bit beyond my radar at the time (Vietnam was always in the news and this was just more stupid killing; I was a kid and killing was always bad). The movie was kind of promoted as a disaster-like film and it disappointed in that manner. It was also a bit slow. But it was unnerving when characters just got shot and there was no good reason why; they weren't bad (per se)so it was tense.
The TV footage had Heston looking like he wore a bad hairpiece and kind of ruined the impact of the original. Earthquake had one outtake and a bunch of new footage while The Towering Inferno and Airport '77 used extensive outtake footage to beef up the running times for two part showings and At Long Last Love got an entire re-edit for TV showings, so TMW was not the only theatrical to get seriously tweaked (not counting edits for running times and dialogue/visuals). That footage might have curiosity value now, but it didn't look like it belonged in the same movie.

Fascinating; thanks for sharing. In the article, I forgot to mention a TV movie titled 'The Deadly Tower' that aired in the fall of 1975, the year before 'Two-Minute Warning.' Kurt Russell played Charles Whitman in 'The Deadly Tower,' and I remember that had a big impact on me at the time.

Now that you mention it, I remember seeing the TV version of 'Earthquake' with its additional footage, though I'd forgotten about 'The Towering Inferno' and 'Airport 77.' TV broadcasts were a much bigger deal, obviously, in the pre-home video era, which made it financially worthwhile to stretch things out. Remember 'The Godfather: The Complete Novel for Television'?

I forgot about The Godfather re-edit. Thanks for the reminder about The Deadly Tower. I saw that and Targets a few years ago via cable. Karloff was great in Targets as was Russell in Tower. I remember the advertising hype about Tower especially since it got one of those Close-ups in TV Guide. Didn't watch it then, still a kid.